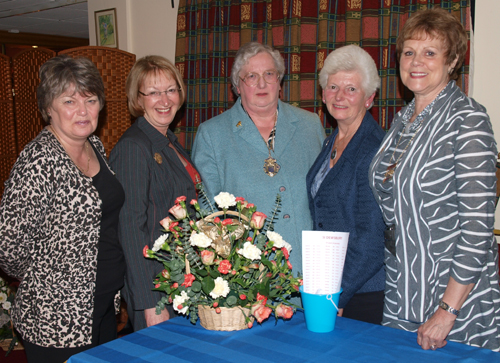 President Carol invested Rev Ann Sherratt as incoming President with her chain of office. Ann is a local Methodist Minister and has titled the year ‘Jubilee – Freedom’ since the word jubilee derives from a long ago custom of freeing slaves in the fallow year after 7 years of working the land. This is the 70th year for SI Dewsbury and Soroptimism is about freedom for women and girls – several of the speakers’ topics reflect this. President Ann is placing emphasis towards Programme Action and her selected charity is Dewsbury Women’s Health.

President Ann began her year with a President’s At Home on 21st May. Over thirty members visited to enjoy tea, coffee and a wonderful selection of homemade cakes over the morning, afternoon and evening ‘sessions’.

At the May Speaker meeting Margaret Watson talked about the formation and work of the Dewsbury Women’s Health Group, the chosen charity for this presidential year. 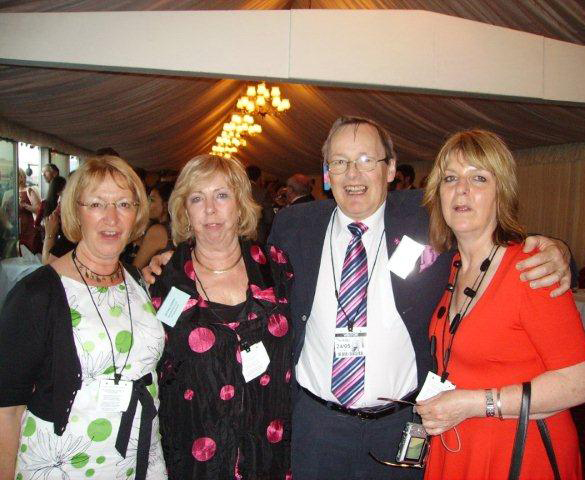 Pat Thornes and Julie Thompson  from S I Dewsbury were invited to a House of Lords reception on 24 May 2012 by Breast Cancer Campaign for the fundraising work for the charity.   The reception was hosted by Baroness Warwick of Undercliffe (Bradford).

The Flower festival at United Reformed Church was opened by the Mayor Cllr David Ridgeway on Saturday 10th June, the two day festival was well attended and along with proceeds from the sale of refreshments and goods stalls over £1400 was raised for Marie Curie Cancer Care. 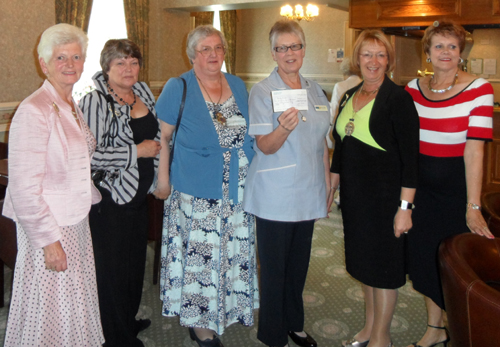 IPP Elaine Hough presented Marie Curie nurse Dianne Hughes with a cheque for £2760 raised from the various charity events held over the past year including £1900 from the Flower Festival held in June. 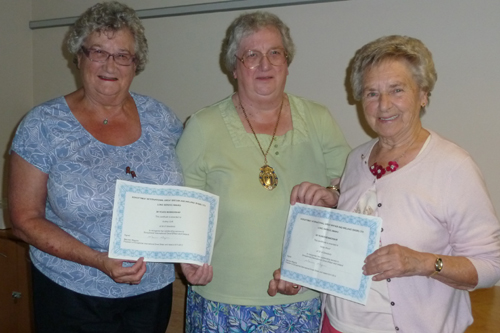 A Strawberry Lunch was held at Carol and Glenn’s on Sunday August 5th when members and friends enjoyed lunch, a home grown produce stall, craft stall and a raffle raising over £300 for the President’s charity Dewsbury Women’s Health Group. A torrential storm in the middle of the afternoon created havoc as members were stranded at the bottom of the garden, in the garage and even imprisoned in the house until escape to cars as the road outside became a river.

On one of the hotter days of this summer, 11 August 2012, 8 members, plus friends and Soroptimisters when to see the 2012 York Mystery Plays, which were exceptional.  The plays havn’t been performed since 2000, then in York Minster.  This year they were performed in the St Mary’s Abbey gardens, which made a great backdrop to the plays which were this time set in the 1940’s.   A great day was had by all. 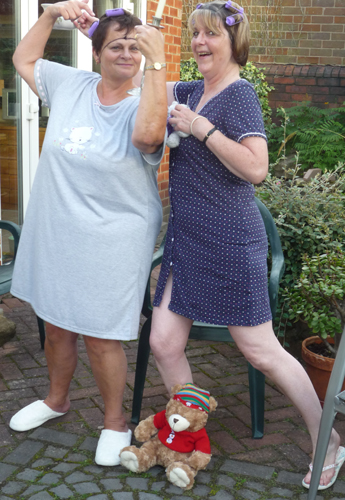 The refuge in Dewsbury was desperate for nightwear, change of clothing and toiletries. With this in mind we decided to collect for them. We decided to have some fun whilst doing this and so we had a Pyjama Party. We met at Pat’s and 16 ladies joined in the fun by dressing in pyjamas and nighties. We then played silly games (Twister, The Chocolate game, Guess whose handbag etc) followed by supper and Hot Chocolate with marshmallows. We had such a laugh and the Refuge was so grateful for all the donations.

A party of members attended York Races on Ladies Day. 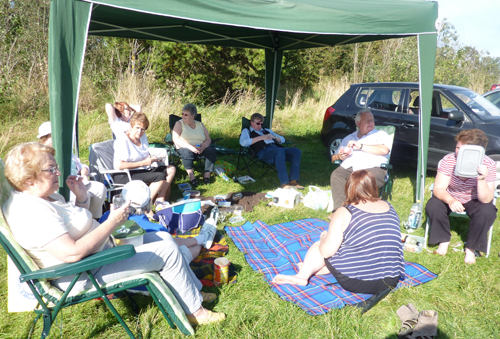 On Saturday September 8th the PAC arranged a walk from Pugney’s Country Park for members, setting off to walk to the castle then going round the lake followed by a picnic for all. 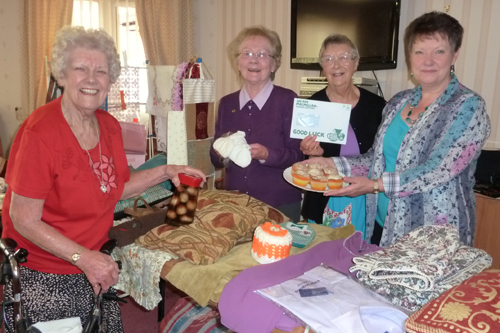 Members helped the residents of Tentercroft Court at their annual event for the Macmillan World’s Biggest Coffee Morning. A number of stalls including cakes, bric a brac and tombola helped to raise £552.51 for Macmillan. 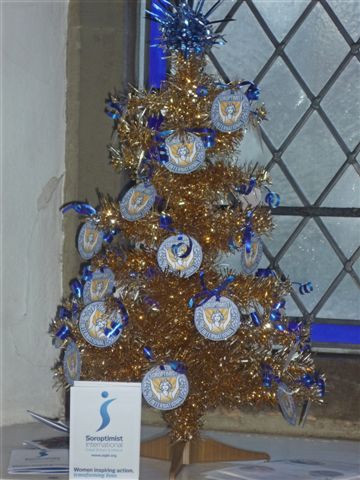 SI Dewsbury member Pat Thornes responded to a request to participate in a Christmas Tree Extravaganza at St Saviour’s Church, Brownhill, Birstall. The request was at short notice but Pat swiftly set about decorating a Soroptimist tree to join the decorated trees from six Birstall traders, Birstall in Bloom also different groups connected to the Church. A Christmas Fayre was held on the 24th November serving toasted sandwiches and mince pies, it was heaving and they made £1,800.The displays were on view until January.

A Christmas Party at ‘Tentercroft Court’ – sheltered accommodation for the elderly

On December 8th 2012 members of SI Dewsbury gave the residents of the above a party to remember. Their January 2013 Newsletter ‘Tentercroft Titbits’ recorded the residents’ appreciation of the event:

‘If you look up Soroptimist in the dictionary it says “A society for female scholars”. Well, I have another description of my own and that is a group of women who are very good cooks, good singers and very good company. The lady Soroptimists certainly gave us an entertaining afternoon starting with a sumptuous lunch with beautiful sandwiches, cakes and pastries, followed by a performance of amusing and comical christmas poems, concluding with some well sung and much loved carols. We all had a very entertaining and joyous afternoon – the trifle was superb’!   Submitted by Mel – a resident.

Also in a summary of the past year Peter, another resident, wrote: ‘All the indoor events were good, the singers who visited and the Soroptimists – “Lovely People” – providing a lot of enjoyment’.

Getting Together – St John’s Lodge No. 827 Dewsbury and SI Dewsbury

St John’s Lodge No. 827 in Dewsbury hosted a joint Social Evening with the ladies from the Dewsbury Club of Soroptimist International. A Professional Women’s Organisation that works to promote social justice and equality and the empowerment of women through economic independence and greater participation in decision making at all levels.

Entertainment was provided by “Songsational” a local music group and was greatly enjoyed by all those who attended. A Supper was also provided. A very enjoyable evening was had by all the members and guests of both organisations that attended. This annual event although primarily a social occasion has also raised money for local charities.

The evening raised £315 which was donated to the Howland Centre, a Dewsbury Support Group for disabled people.

The previous year’s event raised £250 which was donated to Jo’s Cancer Trust and the year before that raised £340 which was divided between Kirkwood Hospice and Help for Heroes.This was the fifth annual joint social evening between the two organisations which we are hoping to continue in the future to maintain the link. These events started in 2009 when W Bro. John Davis was Worshipful Master of St John’s Lodge and Mrs Linda Davis was President of the Soroptimist International Club of Dewsbury. The previous social events have included a Quiz Night, an amateur XXX Factor Show and a Call My Bluff Wine Tasting Evening.

In October 2009 a fortnightly cafe providing cheap lunches for the community of Thornhill, Dewsbury was opened in the local parish church. It targeted lonely and bereaved women and those with low incomes in particular, but a good range of the community came to enjoy each other’s company, eat superb home-made food and listen to local musicians who voluntarily entertained them. Gradually numbers increased and its good reputation spread.

A letter from the PCC Secretary indicates the appreciation of Thornhill Parish Church: ‘Many thanks for your letter showing a break down of the fundraising you have managed whilst running SIDz Cafe under the aegis of the Soroptimists…..On behalf of everyone at Thornhill Parish Church, I offer you our hearty congratulations on the magnificent achievements, which no doubt, have been due in no small part to the hard work by you and your colleagues……We are also very grateful that you and your colleagues are continuing to provide a cafe for the community of Thornhill now that the Soroptimists are no longer involved’.

Clearly, the cafe has been a success story for the Club. However, after 3 years SI Dewsbury will no longer take part in the running of the cafe. Rather, from January 2013, the few members and their non-soroptimist friends who have continued with this work throughout its history, have decided to keep the cafe open on a weekly basis as an independent community-based project.

On March 1st a Silent Auction and pie and peas supper at St Paul’s Church Hall, Hanging Heaton raised over £300 to help sponsor the school fees for Tracey, a Kenyan girl that the club are helping to educate.

A number of SI Dewsbury’s Past Presidents met on March 18th for their annual dinner at the Mews Hotel, Ossett. 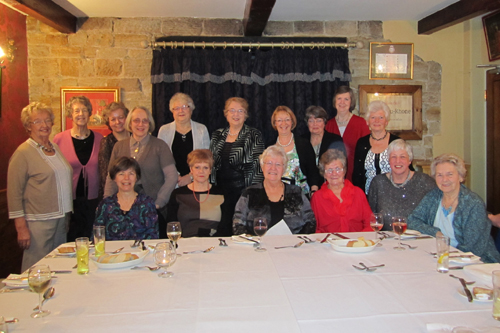 On a snowy March 22nd a reduced party of intrepid members went on a coach trip to Chester for a Canal Lunch Cruise, despite the bad weather a good time was had by all. To celebrate World Water Day Pat Thornes had prepared a water themed fun quiz to pass the time on the journey and a collection was taken for Water Aid 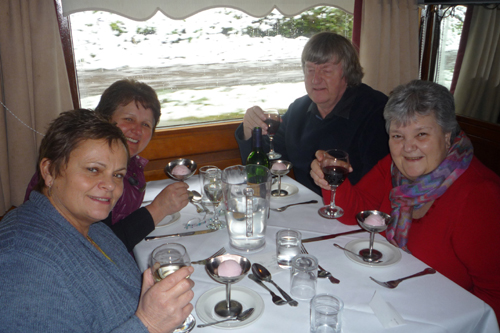 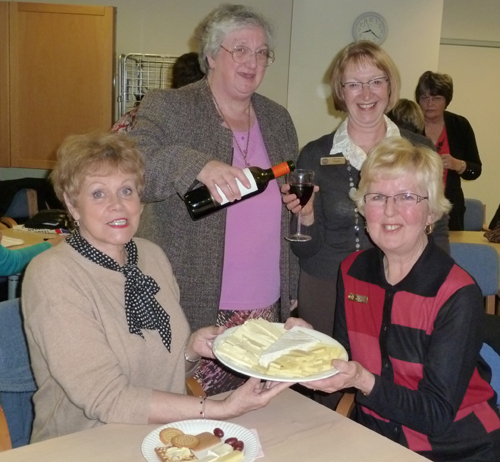 At the speaker meeting on April 4th SI Dewsbury member Julie Thompson, the SI Yorkshire President related the duties and experiences of the role of regional President to the club, followed by a Cheese and Wine supper.