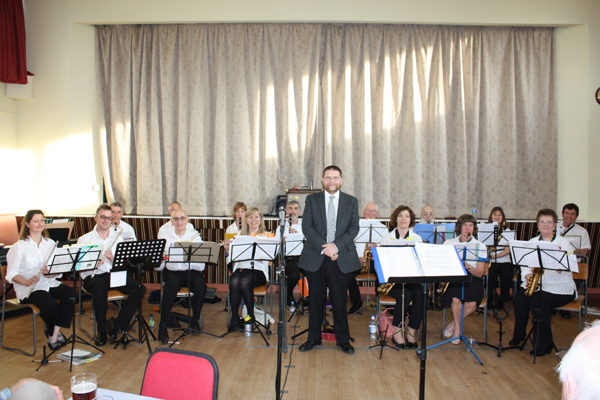 An Evening Concert on behalf of Kirkwood Hospice was held at St Paul’s Church Hall, Hanging Heaton, the evening featured ‘Winds of Time’ a woodwind ensemble performing a mixed programme of popular music and St Paul’s Mothers’ Union Choir. The event was very well attended and over £400 was raised for the President’s charity. 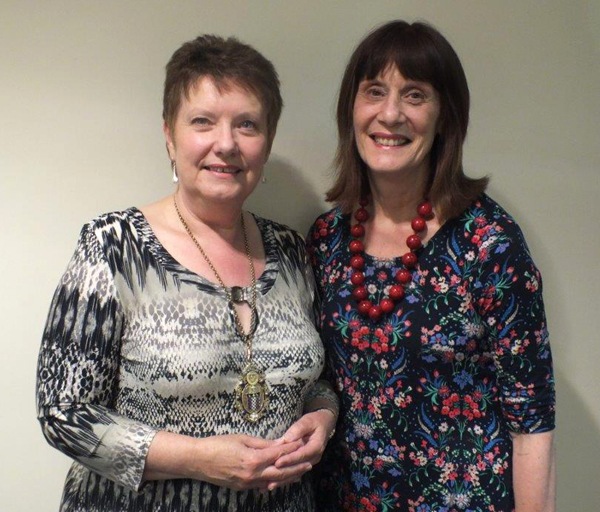 The first speaker of our new president’s year was Anita Fatchett (pictured Above right with President Sue), and her theme was ‘endings and beginnings’, which is what life is all about..the twists and turns which happen to most people in the course of life. This lady seemed to have a fairly straightforward childhood and teenage years; went to university and then into nursing, met and married and had two sons.
Then her life took a roundabout turn when her husband Derek decided to ‘go into politics. He soon became a local councillor, then a member of Parliament connected to the foreign office, during which time they travelled extensively, often in the company of Her Majesty the Queen and Prince Philip!! Tragically Derek died very suddenly, and so started another phase of Anita’s life…picking up her nursing career, learning to ski, writing a book, and generally ‘getting on with it’. The day before our meeting she was at Buckingham Palace with her son at the Queen’s garden party.  A truly inspirational lady. President Sue with plant sellers David and Roger, and hosts Glenn and Carol

Sunday the 8th June saw the first social event of our new president Mrs Sue West, our annual garden party, held as usual, at the home of Carol and Glenn,
Once again we were favoured with good weather, so were well able to enjoy their beautiful garden, the fanastic food provided by members of the club, the plant sale and the company of the many people who attended,
The event was held to raise funds for our president’s charity Kirkwood Hospice, and was hugely successful, we raised over £400.00. A wonderful event to start the new club year. 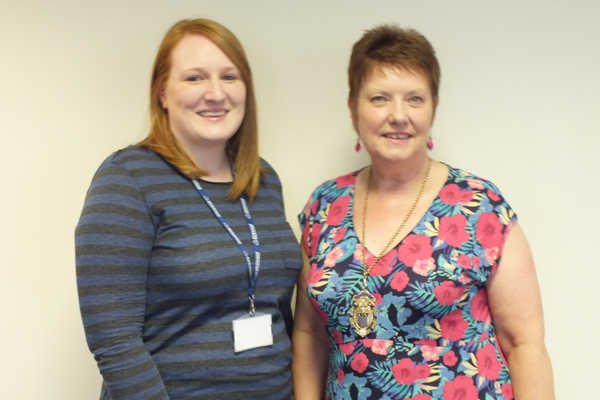 The June speaker meeting was presented by Emily Kennedy, community worker for Kirkwood Hospice (pictured above left with President Sue West). Emily gave us a very comprehensive insight into all the projects which help to make the Hospice function. The Hospice is not just there for cancer patients, but for all people who may have a terminal illness, to make their lives as comfortable and as varied as possible.The Hospice was opened in 1981 but not completely up and running until 1987. Since those days the Hospice has had  a full overhaul and now all rooms have an en suite, there are other facilities including a family lounges, TV room, overnight accommodation should a family need it. There are hydrotherapy baths, complimentary therapies, beds which are easily moveable in order that patients can enjoy the outdoors when appropriate. Emily was not, of course, here for those reasons alone. The Hospice needs £5 million per year to provide this care and these facilities,free of charge, and depends on the generosity and help of the general public, and by supporting their fund raising events, such as the
Trial Run, leaving a legacy, midnight memory walk, bungee jump, and a host of other activities, the hospice will continue to provide all these amenities, and more. It was a very interesting and enlightening evening, given to us by a young lady who is both very knowledgeable and passionate about her work. 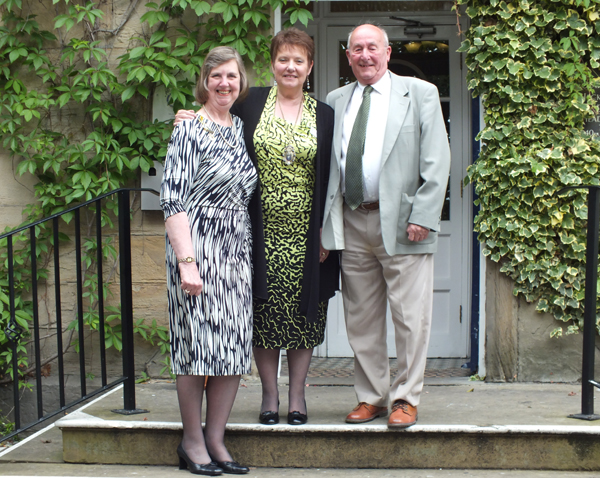 Sunday June 29th was our Charter Lunch. New president Sue West, and a new venue Healds Hall,Heckmondwike. This event, very popular with all our members, was attended by about 70 people, people had travelled for many miles to be with us this day. Amongst our guests were SI Yorkshire President Margaret Cook, SI Yorkshire Immediate Past  President Julie Thompson; member of SI Dewsbury and District, guest speaker Mr Malcolm Haigh, journalist and Historian, and members from many other clubs in the Yorkshire region. A grand event, enjoyed by all. 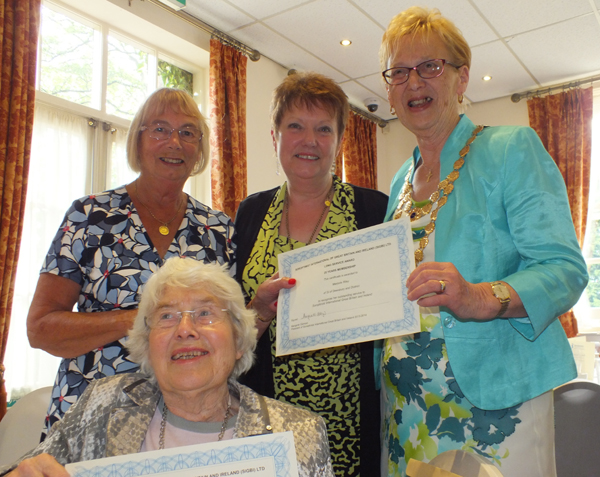 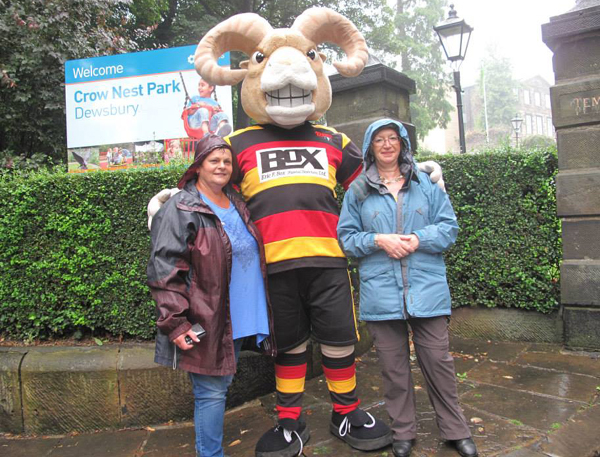 In spite of rain, rain and more rain, being the soroptimists as we are, we managed to make it fun. We thank all the people who did turn out, with brollies, wellies etc etc.The treasure hunt was a challenge, but satisfying for those who managed to get round, and the prizes were great. We mixed and chatted with the other stall holders, so not a complete washout. 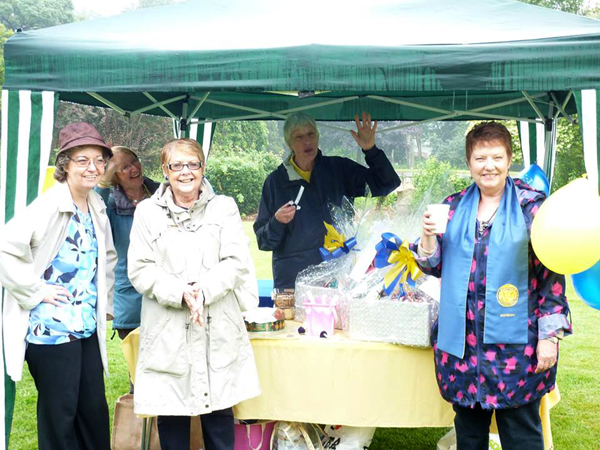 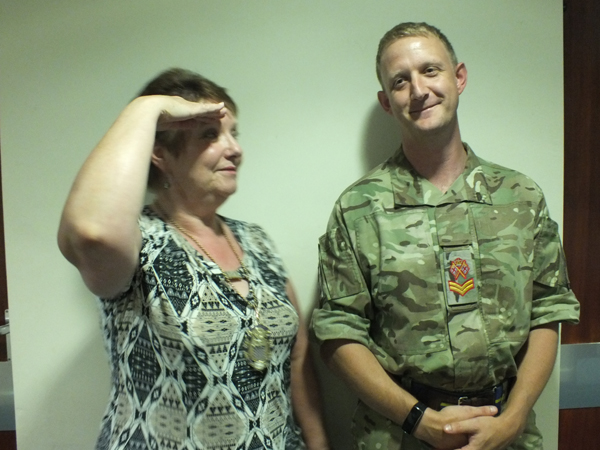 At our last speaker meeting before we meet again in September, Sergeant Adam Bradshaw spoke to us about the role of women in the modern army, a role which goes back many many years. In 1902 there was  the Queen Alexandra Nursing Corps, and through the years the number has increased, even though they did not always do the work which
they do now. The training is the same for women as men, they have equal pay, equal opportunity for promotion,  and have served on the front line in war zones such as Iraq, Northern Ireland, Sierra Leone and Afghanistan.
For women joining the army there is plenty of scope for education which is generously funded.  In fact Sergeant Bradshaw’s future wife was serving in Afghanistan, which was where they first met. It seems that there is plenty of scope for a successful career for women in the army today. 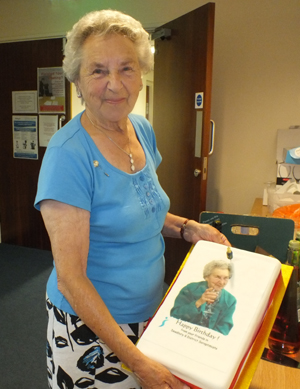 At the end of the meeting celebrations were held for the recent 90th birthday of Honorary member Hilda.

President Sue presented Hilda with a bouquet of flowers then everyone sang ‘Happy Birthday’ and toasted Hilda with a glass of wine and enjoyed a slice of her decorated birthday cake. Music! Music! Music! was the theme of the social event held on Saturday June 12th. It was music all the way when a packed hall tapped, swayed, and clapped to a wonderful evening of live music. It was an evening which appealed to music lovers of any preference and the crowd demonstrated their appreciation by being very reluctant to let these artistes go 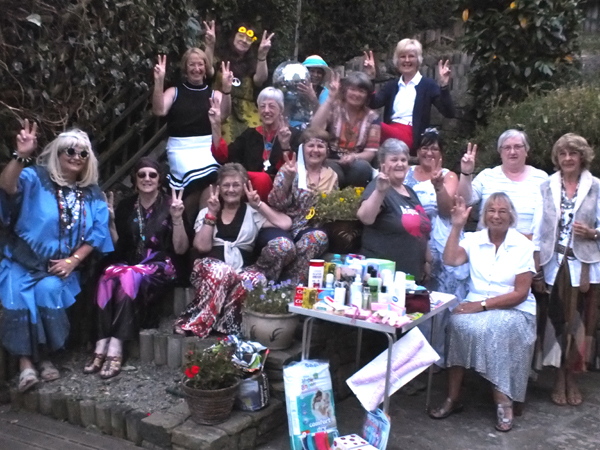 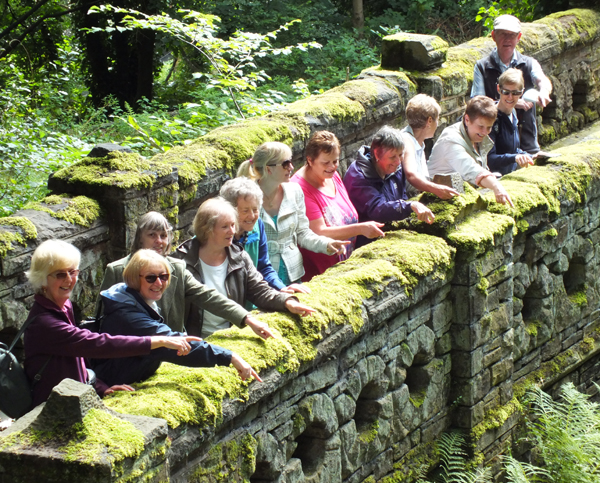 The final summer social outing was a visit to Beaumont Park, Huddersfield organised by Sue Fox who is a volunteer in the garden there. Members also enjoyed their annual trip to York Races in August. 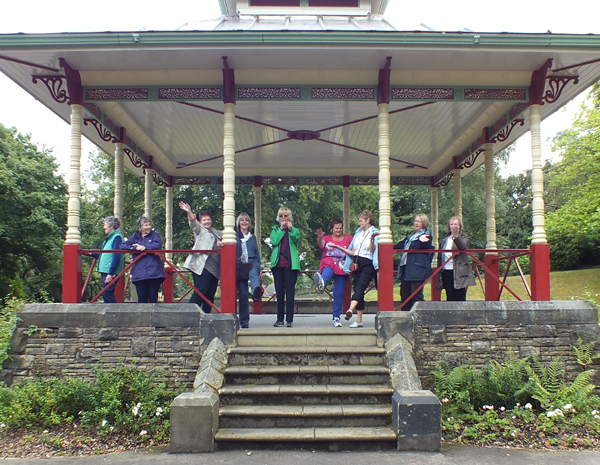 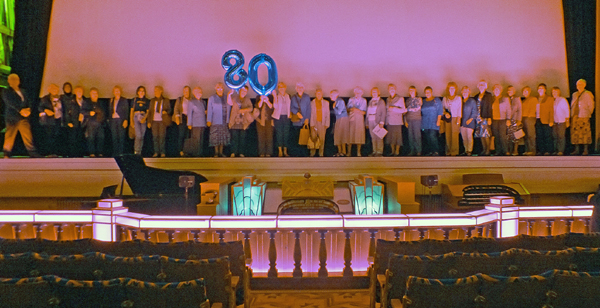 Members enjoyed a wonderful day out to Stockport. President Sue arranged a tour of The Plaza, a recently restored Art Deco cinema including an afternoon tea style lunch in the café. We were joined by SI Yorkshire President Margaret Cook for the visit and three of the SIGBI staff from HQ also came to join us over lunch. This was followed by a visit to the near by Hatworks Museum where enthusiastic guides described the processes in making traditional ‘felt’ hats from rabbit and other furs. The driver then gave us a mystery tour of the local ring roads before returning us back to Dewsbury after an interesting day.

SID rises to the challenge 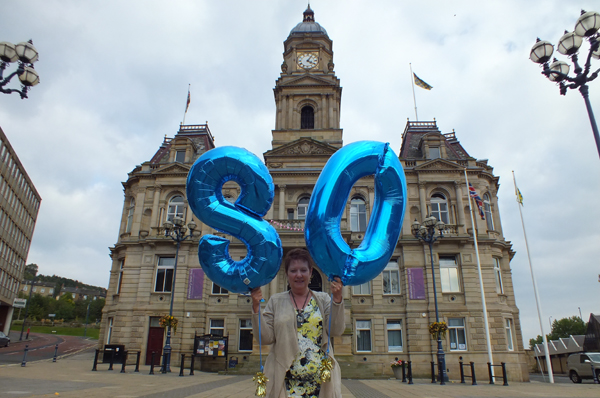 Debra Hall the artist in residence at the Howland Centre spoke to members about the work the Centre does in helping people to achieve their creative potential in craft sessions. She demonstrated samples of work made by centre users.

President Sue presented a cheque for £100 raised by recent events including the Treasure Hunts in Crow Nest Park.

Roger eyes up the goodies on sale! 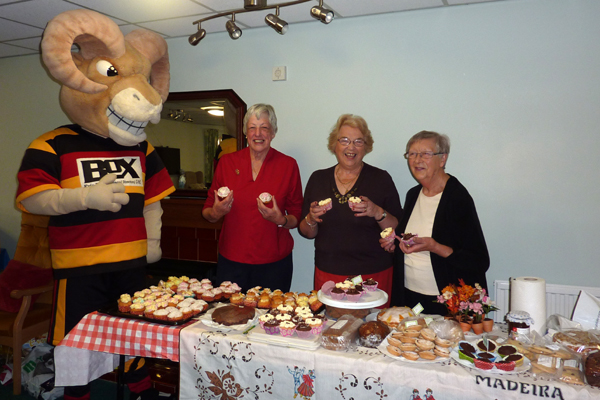 Not just any visit… 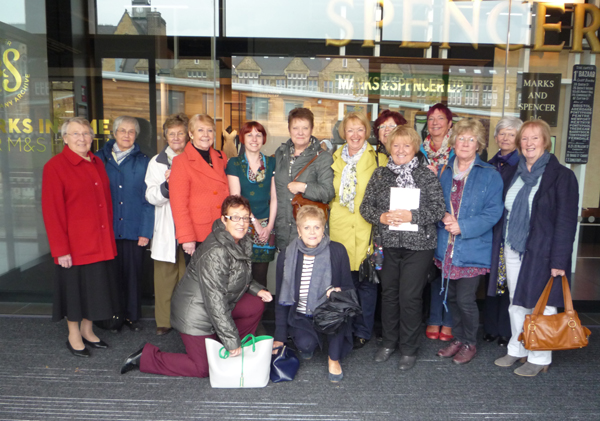 This was an M&S Archives visit!

A group of members and friends visited the Archives of M&S in the new modern Michael Marks building in Leeds on October 7th. They were treated to an illustrated talk about the company followed by a guided tour around the display cases where many recognised familiar goods from the companies history.

Not quite dancing in the aisles – October 15th

A party of members braved a very rainy night to enjoy an anniversary performance of Riverdance at Bradford Alhambra. A wonderful evening of Irish and other dance styles entertained everyone. 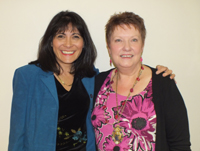 The speaker was by DrLinda Harris. Linda is not just a very busy GP but was instrumental in setting up Spectrum Health care in Wakefield. Amongst many of it’s projects is the health of  women in prison and for Linda, Newhall YOI, and Wakefield men’s prison.Spectrum Health care deals with the mental and physical health of women offenders, who have often neglected themselves because of an addiction possibly, lack of knowledge, or lack of motivation due to varying circumstances in their background. Many of the girls are pregnant when they come into prison and so require the care necessary for baby and mother. Everyday primary care is the objective of Spectrum. They work as a team within the prison, but along with the prison service, and the NHS, and the care often continues when a girl leaves prison.Linda’s work also takes her into the Wakefield men’s prison where, because of the long serving offenders, there is an ageing population, and therefore their needs are different, but providing health care is still a priority.It was a very interesting and enlightening presentation, enjoyed by everyone. 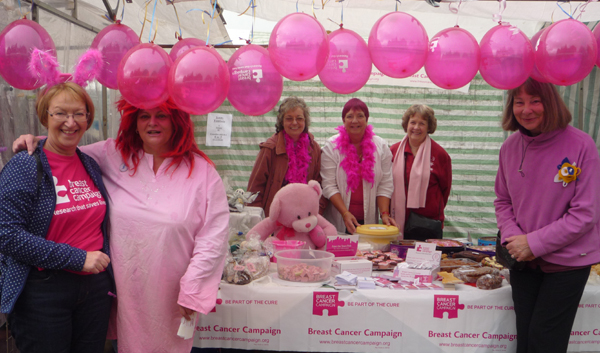 Together with SI Wakefield, members painted Ossett Pink for Breast Cancer Campaign.  Friday 24 October was ‘Wear It Pink Day’, members dressed in pink holding a stall on Ossett market selling cakes and with a teddy bear tombola. Retailers had been visited previously and encouraged to ‘Get in the Pink’ by decorating their shops and taking a collection tin for the week. The grand total raised so far is £242 from the stall and £478 from the collection boxes with some still to come in. Wakefield Express Report below: 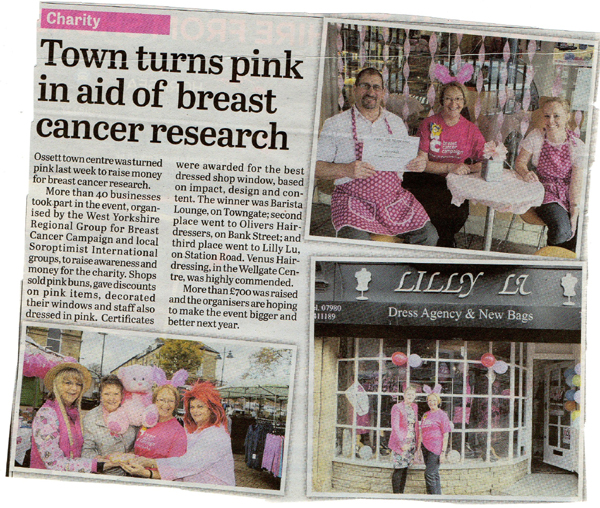 S.I.D.D. certainly had a very busy and entertaining month; begining with the annual Christmas dinner held at the Mews Hotel on Ossett, where everyone enjoyed the excellent food and had fun with the entertainment. 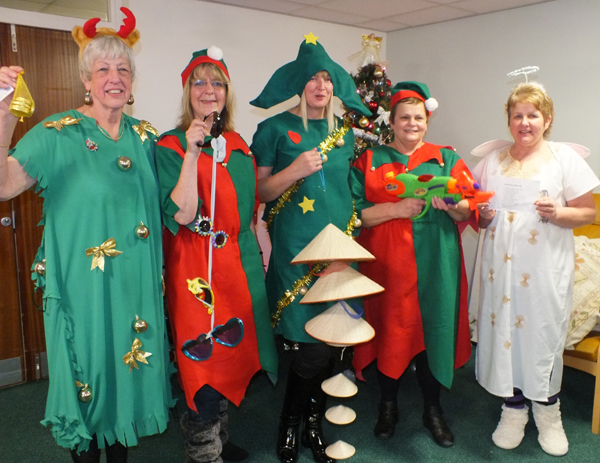 Next Tentercroft Court, Dewsbury. along with all the party crackers, a glass of sherry, and excellent food, this year we had a visit from Santa,whose ‘elves’ were there to greet him, and our own troupe of ‘thespians’ singing their version of the 12 days of Christmas. Everyone agreed that it had been a wonderful occasion, once again.

Photo Above: Tentercroft Court with the participants of The 12 days of Christmas.

The carol service on December 7th, once again at St Pauls Church at Hanging Heaton. Along with the Gawthorpe Brass  Band, a very enthusiastic congregation, and the ladies’ choir, augmented with some SIDD members, it all added up to a very moving service, enjoyed by all. The traditional mince pies and coffee were served in the hall afterwards. At the Christmas Meeting we celebrated a big birthday with member Beth – pictured with her flowers, cake and celebratory spread. 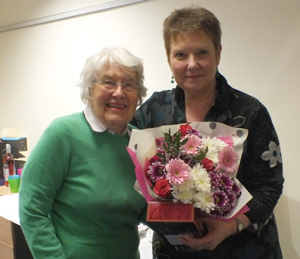 As January’s Speaker meeting was cancelled due to the snowy weather, celebrations were held over for Kath’s recent big birthday. President Sue presented Kath with a cake and flowers and everyone toasted Kath and helped to demolish the cake. February’s speaker was Rashida Jasat who spoke about ‘Arranged marriages’ – a very moving talk with some personal family memories involved. 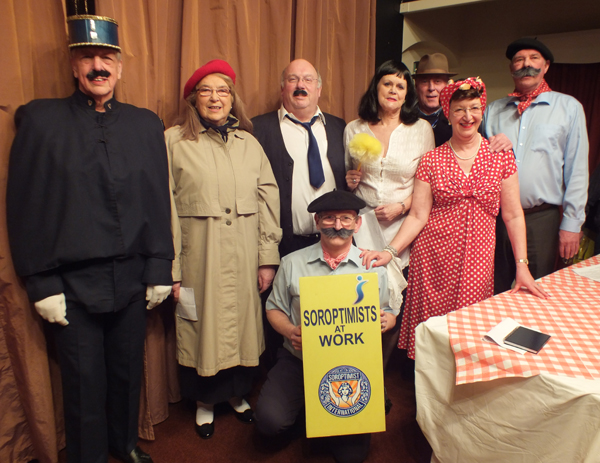 A French Café themed evening of ‘Allo, Allo’ was held on March 14th.The hilarious plot was performed by members and rounded off with a Can Can to bring the house down. Proceeds of £700 was raised for the President’s charity Kirkwood Hospice. 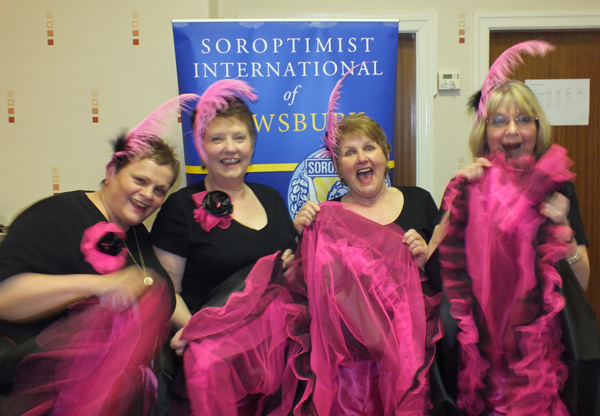 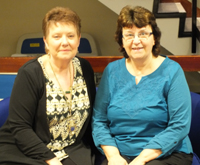 Our final speaker, Susan White, on ‘Women’s Suffrage in Batley’, had us astounded at the strength of the movement in, not only Batley, but other places such as Bridlington, Whitby, Goathland, Grassington, Huddersfield and Leeds. Susan, a true devotee of suffrage had unearthed many of the local ladies involved in demonstrations, marches, sit-ins and hunger strikes; in many cases resulting in prison sentences. She was extremely proud that one such lady had actually been a teacher at the school which Susan attended may years later. 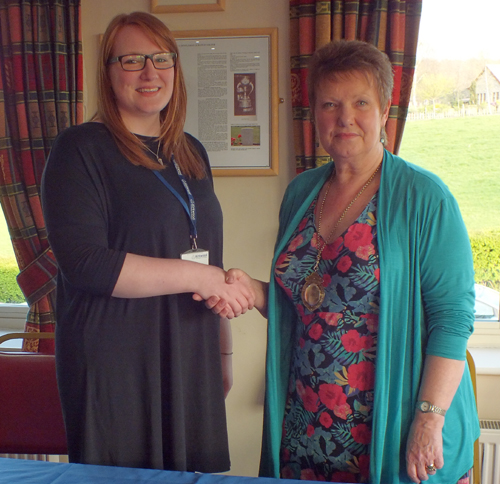 A cheque for £3,200 was presented to Emily Kennedy from Kirkwood Hospice by President Sue. An excellent amount raised during Sue’s presidential year started with generous donations from Sue’s birthday celebrations.