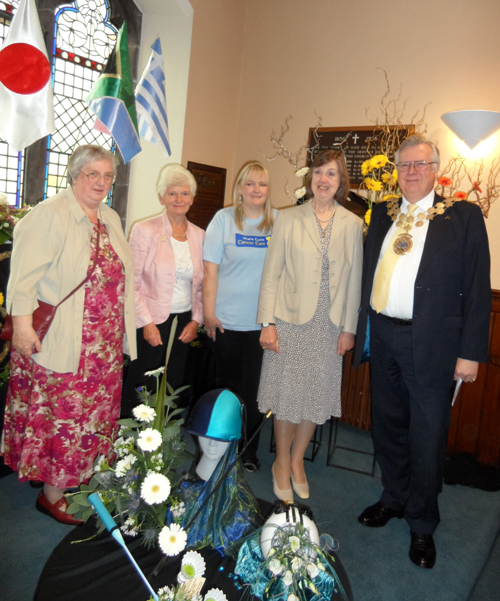 The Flower Festival at United Reformed Church was opened by the Mayor Cllr David Ridgeway on Saturday 10th June. The theme for the festival was based on summer events i.e. the Golden Jubilee, Olympics, Wimbledon, Henley regatta etc. Various people volunteered to do arrangements including flower clubs, florist shops and individual flower arrangers including SI Dewsbury members. Much sponsorship was received from local companies and clubs. A cake stall, book stall, bric-a-brac, clothing and jewellery stalls in the Church Hall helped raise funds along with members serving tea, coffee, sandwiches and scones. On Sunday tea, coffee and scones were served after the morning service.

The two day festival was well attended and along with proceeds from the sale of refreshments and goods stalls over £1400 was raised for Marie Curie Cancer Care. 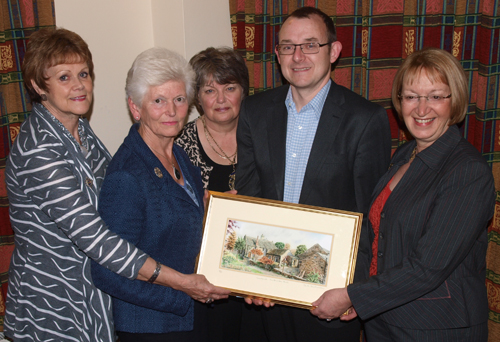 The 69th AGM was held at Dewsbury District Golf Club on 26th April 2012. President Carol welcomed members to the meeting and then presented a cheque for £1,500 to Tom Taylor, Director of Northorpe Hall Child and Family Trust. He thanked SI Dewsbury for the efforts made on their behalf and expressed his deep appreciation. The club has also raised funds for the Marie Curie Cancer Care during the current year. President Carol inaugurated Honorary Membership status on Christine Withers, a long-serving member of SI Dewsbury. Chris was acknowledged for her valuable contribution to the Club. She was surprised but delighted and expressed her appreciation and thanks, and was presented with a basket of flowers. The four outgoing Presidents spoke in turn summarising the events, speaker meetings and social activities that had taken place in their year. 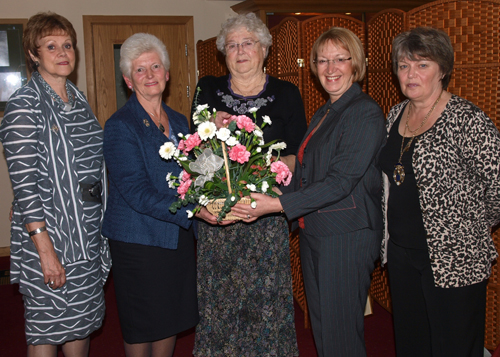 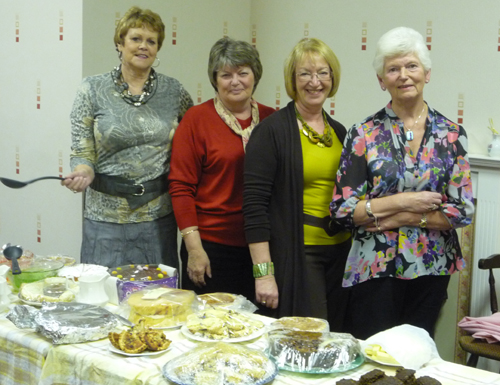 Ready to serve you: Presidents Elaine, Carol, Julie and Jane – ladles (or should it be ladies) at the ready

The last event of the presidential year was a Yorkshire evening at St Ignatius Church Hall to raise funds for the forthcoming flower festival to be held in June at Longcauseway United Reformed Church. Members and guests tucked into typical Yorkshire fayre and enjoyed a Yorkshire quiz as part of the Yorkshire themed evening 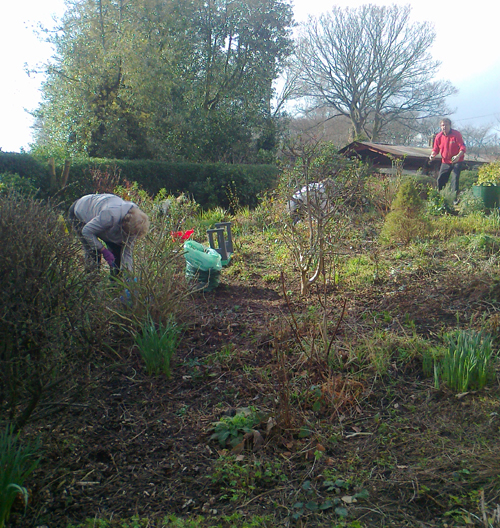 This year members (and Soroptimisters) spent the day at Crow Nest Park tending their plot in the Wildlife Garden, plants were pruned and weeds removed ready for this years growth. A display stand of information and photos of the club was ‘manned’ in the Museum and Marie Curie daffodils sold in the café

We held a Burns Night at St Paul’s Church Hall, Hanging Heaton.  Everyone enjoyed a wonderful Scottish supper followed by music and dancing. 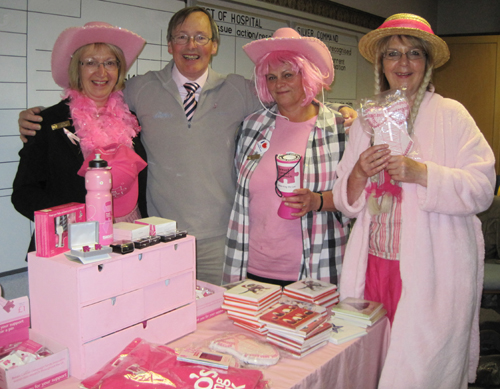 For one week in during October Breast Cancer Awareness month SI Dewsbury painted Dewsbury and Birstall Pink for Breast Cancer Campaign. Working with local retailers through the Town Management Teams and the Chamber of Trade they encouraged retailers within the towns to have pink retail windows, dress in pink, give out literature about SI Dewsbury and Breast Cancer Campaign and generally do anything pink for the week. Even the local weekly papers were turned pink and the local Rugby League mascots were there to support the project. Members also collected in Sainsbury’s and bag packed in a local store. The week ended with a presentation to the club from Peter Johnstone, Community Liaison Officer for the charity. The project was a great success and raised from both the towns £3,000 for Breast Cancer Campaign. 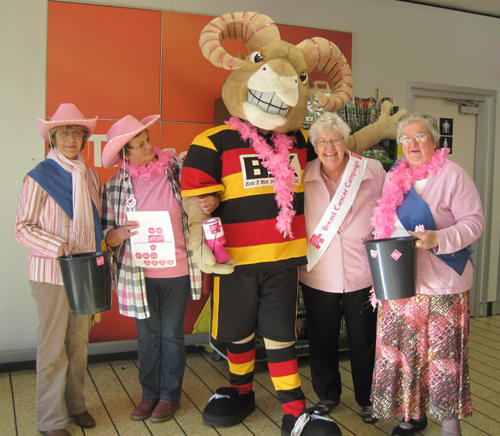 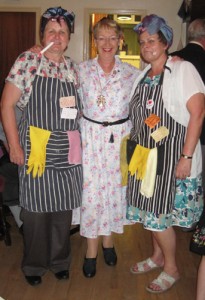 Members dressed in 40s themed outfits and enjoyed a reception of wartime food with of course Spam, potted meat and salmon sandwiches, jelly and cakes.

Taken to the Cleaners!

Friendship Evening with SI Preston at SI Skipton’s House. It is always a good evening meeting up with our friends from Preston sharing food and friendship.

S I Dewsbury annual outing to Ladies Day at York Races – Members enjoyed dressing up and having fun at the races – the champagne flowed and the picnic was excellent – not much luck on the horses though. 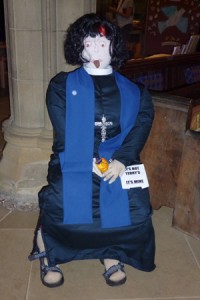 their Scarecrow exhibition. The theme this year was TV characters. Our scarecrow the Vicar of Dibley (Dawn) was made by Jeanette Smart.

The scarecrows were on display on the weekend of their Summer Fair, Saturday July 9th and Sunday July 10th. This was our 4th scarecrow and ‘Dawn’ was seen by many people.

She may appear in Dewsbury market in August, and two members want to borrow her for September! 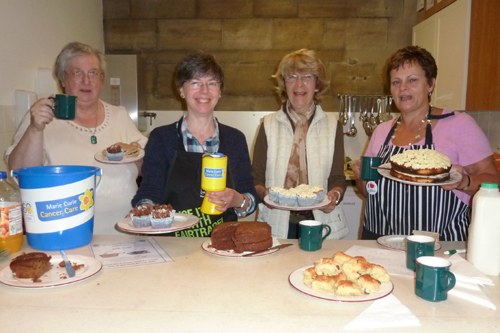 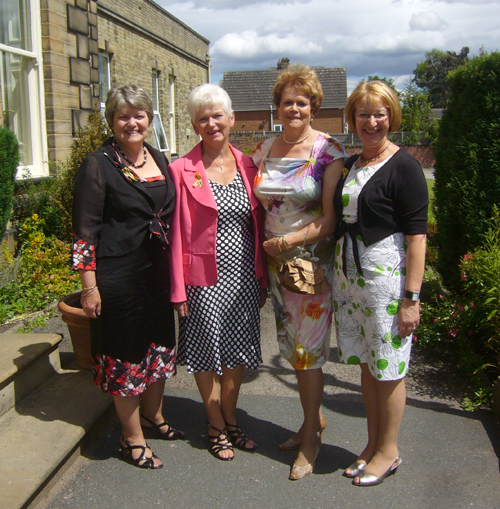 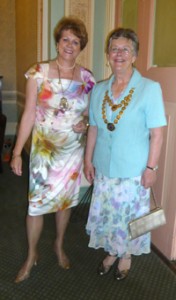 The Annual Charter Lunch was held at Blenheim House, Batley on Sunday June 26th , attended by SI Yorkshire President Val Jenkins and other guests. The Speaker at the lunch Mr Tony Lee an Author and Humorist who has now completed his 3rd book gave a Talk called A Beastly Tale- a humorous account of his own endeavours to begin a new career  in Writing by gathering replies from letters he wrote to various people volunteering to be e.g. the Beast of Bodmin Moor 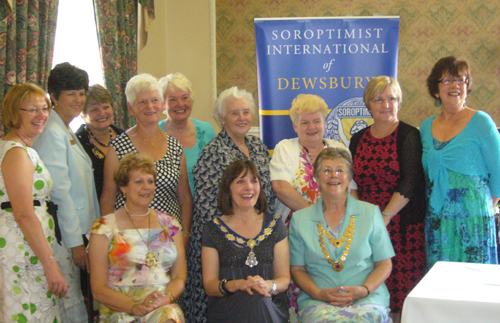 Members had a successful day at the Brighouse Charity Gala selling craft and home made goods for charity funds. 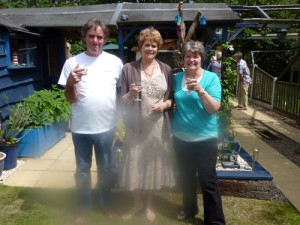 A lovely day – including good weather was held in Carol and Glen’s home and garden.
A delicious faith lunch was enjoyed by all and a busy exchange of plants together with a raffle raised £456.00 for our charity. Many thanks to all who contributed to a super event. 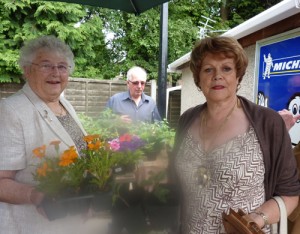