Members also enjoyed several social events such as a visit to London. a visit to the theatre and to a pantomime -(Oh no we didn’t!’), joining in with Scarecrow and Christmas Tree Festivals at a local church, helping with Traidcraft and helping in the local community.

The Club activities are described in more detail below:

SI Dewsbury’s Charter Lunch was held on June 22nd 2008 at Blenheim House, Batley. Margaret Watson of the Dewsbury Reporter was the Speaker.

Visit of SI Dewsbury to the Royal Courts of Justice

A group of members spent a wonderful weekend in London at the beginning of October 2008. A morning visit to the Royal Courts of Justice included a tour and being permitted to sit in a court in process. In the evening we watched a  reconstruction of the trial of Penn and Mead (1670) presented by Nigel Pascoe Q.C.

Those who went to this performance were truly amazed at the mens’ skills in dancing ‘en pointe’. We laughed from start to finish and thoroughly enjoyed the comedy and exquisite athleticism.

Long Service Awards for 25 years or more were presented to 7 members at the Annual Lunch  by SI Yorkshire President Mrs Pat Shore. Another 8 members received their Awards at the following two club meetings.

Enjoying a trip on a barge

On a sunny August afternoon members and friends were messing about on the water! Seriously, by paying for the trip we raised a good bit of money through this popular event for the President’s charity.

President Linda and a few members met at her house armed with straw, sticks, string and a posh suit and hat to create a scarecrow. After a few drinks Esmeralda was born. With great elegance, she then went to the Scarecrow Festival at Thornhill Parish Church.

Soroptiella – a pantomime based on Cinderella written, directed and performed by members ended the year in an uproarous and hilarious manner. Much enjoyed by all within the Christmas meeting. 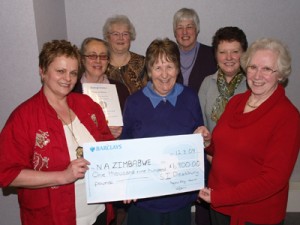 SI Dewsbury members were set a challenge for their Programme Action work with the theme “Soroptimist You’re Hired”. Five groups of nine members each were formed by means of selection from a hat in order to randomly mix members and each group given £10 to increase by whatever means with the aims to:

Groups met and fund raising ideas were buzzing as ideas were formulated and events planned, each group was asked to give themselves a name. By the next meeting ideas and events were announced to the club and diaries were soon filled with each others activities although the main idea was not to just raise funds from only club members.

Over the next month feet didn’t touch the ground as one by one different activities were held and supported by all.

The Gourmet Fillies fed hungry guests at lunches and dinners, and a set of attractive bookmarks was created and sold at events.

The Dewsbury Dynamos’ creative talents emerged as a selection of a member’s watercolour paintings were photographed and turned into packs of notelets, also marmalade was made and a sponsored walk organised.

The Wine Drinkers Anonymous held a coffee morning and sold greetings cards made by a member, and a Games Evening with beetle drive, bingo, quizzes and soup & roll supper was also enjoyed.

Elizabeth Hughes was invited to come and talk to the club at the end of the project, to explain how and where the funds raised would be used. Each group reported how they had multiplied their initial £10 into a much larger sum.

Everyone immensely enjoyed the whole project and although a great amount of effort and support of each other had gone into it a greater amount of fun and friendship had also grown as members had the opportunity to really get to know each other  and engender a true spirit of friendship within the club.

Each group increased their £10 way beyond initial expectations and a cheque for a magnificent £1900.00 was presented to Elizabeth Hughes on March 12 2009.