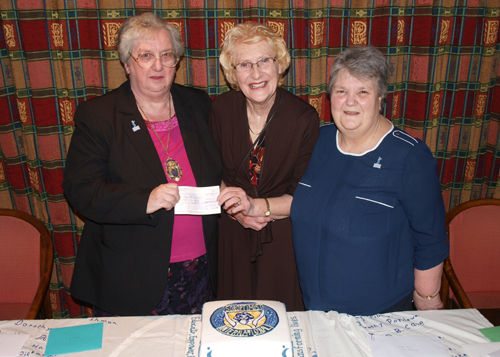 A cheque for £950.00 was presented to Dolores Mulrennan from the Dewsbury Women’s Health Group by President Ann. Dolores said the money was most welcome and would be used to help local women and girls 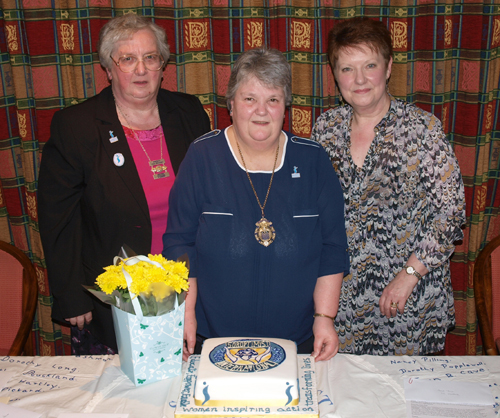 The first meeting of the new year was a speaker meeting, presented by Sue Green, a fund raiser for British Heart Foundation ‘Mending Broken Hearts Appeal’, which is the chosen charity of new President Janet Town. Sue gave an insight into the various means of raising funds for this charity, which aims to raise £50 million pounds for research into every aspect of heart connected diseases. 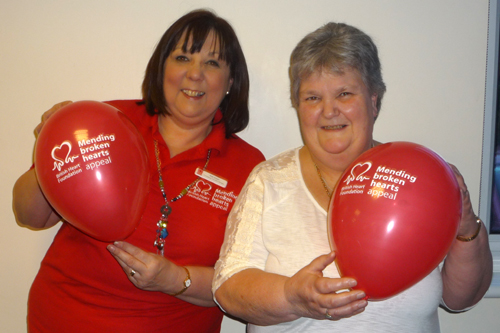 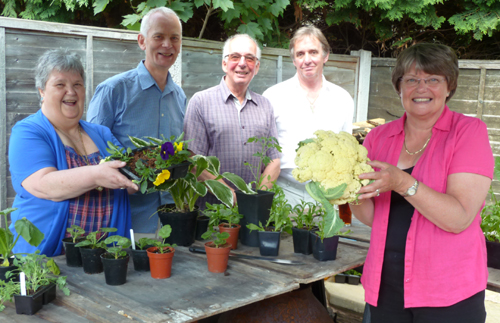 A lovely sunny day for the Garden Produce and lunch at Carol and Glenn’s on Sunday 9th June. Roger and David(pictured above with Glenn) did a sterling job selling the plants and produce including a giant cauliflower which was shared by a few buyers! This was the first fundraising event of President Janet’s year.

A cake stall and bar did a roaring trade and members enjoyed an excellent lunch followed by a garden themed raffle. 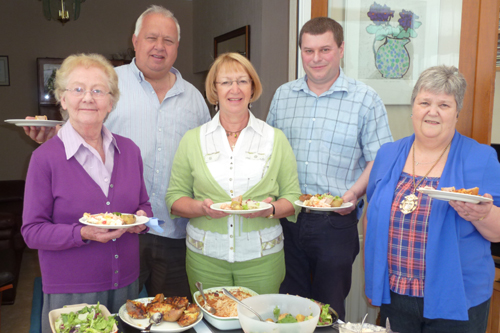 Kiel in Germany was SI Dewsbury’s first friendship link, 16 years ago. We were invited to visit them for their 30th Birthday in May. A party of Members last visited in 2008. 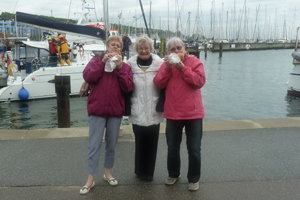 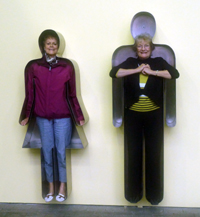 Elaine and Pat accepted the offer of hospitality to visit Kiel recently.Pat reports: “This time we met up again with Brigitte, Gertraud, Christine, Maria, Stefanie and Anne (my old friend Hilde was in England at the Chelsea Flower Show!) meeting new friends Irmgard, Petra and Anette to name but a few. We visited the Viking Museum at Haithabu, Schlewsig Cathedral, had a boat trip from KIel to Laboe, a Kiel City walk and attended their evening Birthday Party meeting the Austrian SI European Vice President. We enjoyed superb friendship and hospitality.”

Outside it was always wet and windy for taking many photos! Inside, –not always appropriate! 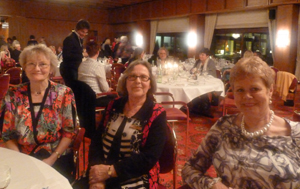 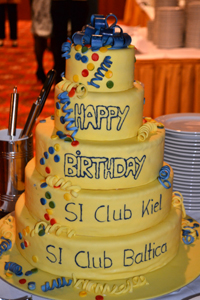 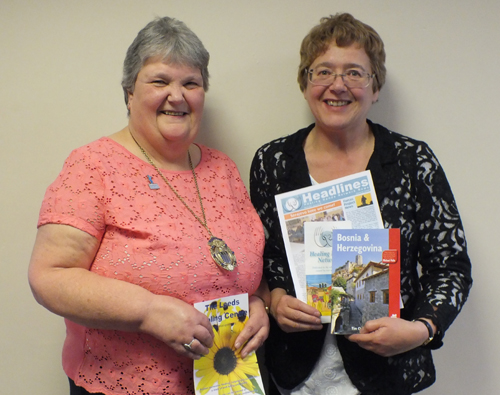 Ann Gore gave us an insight into her work with Healing Hands Network. Healing Hands pioneered it’s work in Sarajevo, Bosnia, and Anne worked with them there for one year. This work involved helping people traumatised by the effects of war, torture rape, disappearance of loved ones etc. Help is given by using various methods of relief including massage, aromatherapy, acupuncture, reflexology, reiki and shiatsu.

Healing Hands Network has recently launched a project in the UK to help service and ex-personnel, and their families, suffering from ‘post traumatic stress disorder’, due to events experienced during military combat.
Ann answered questions about this very interesting subject and thanks were offered by the president. 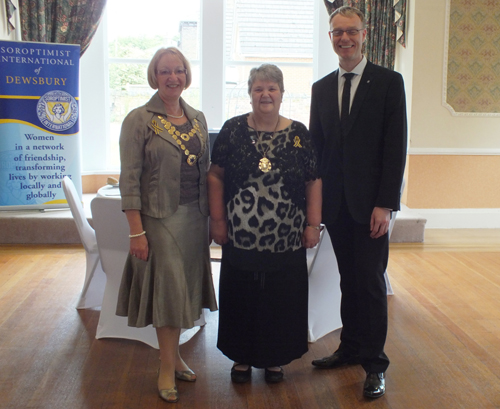 The annual charter lunch was held at Blenheim House, Batley on Sunday 30th June. This was attended by approximately 50 members and guests including the Yorkshire President Julie Thompson and her husband Michael. After a substantial lunch, Dewsbury President Janet Town introduced guest speaker Mark Grason. Mark is a member of the Magic Circle and gave us an interesting presentation on the history of this association, along with some ‘magic tricks’ which left everyone completely baffled.

After this very entertaining speaker, President Janet thanked everyone who had attended the luncheon, and those who had helped make it the success that it was. 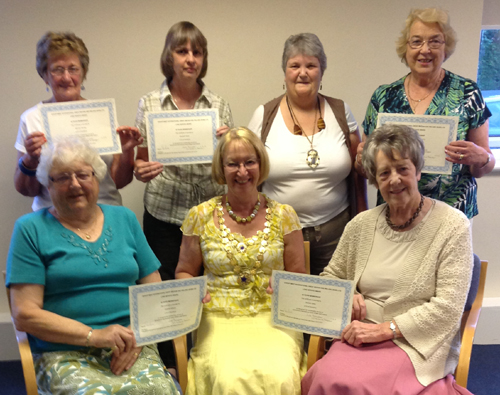 Other members due to receive their awards but not present at the meeting include: 35 years: Eileen Hartley, 30 years:Sue Glover, Pat Nicholson and Margaret Smith.

Terry Anne Scholes a hypnotherapist and hypnotist, was our speaker on July 25th. After suffering depression for many years she decided to attend hypnosis classes and now practices herself. She demonstrated her skills and introduced us to her best therapy – the great belly laugh. 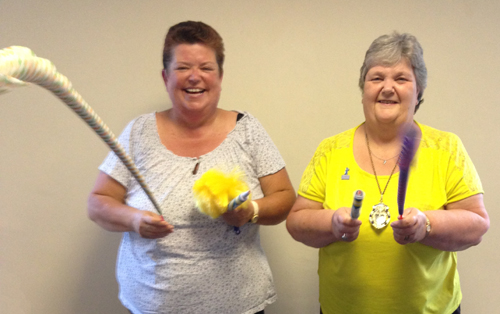 The visit, to meet up with our sister club S.I. Preston, at Soroptimist House in Skipton, was August 1st, on what was reputedly the hottest day of the year. This annual event was as usual a huge success..lots of good food, good company, fun and friendship. 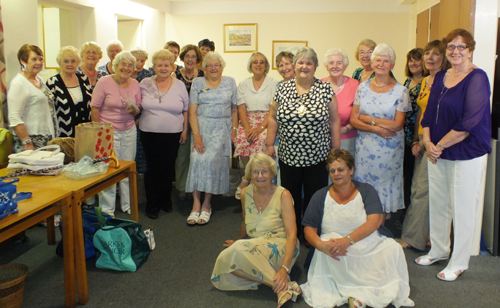 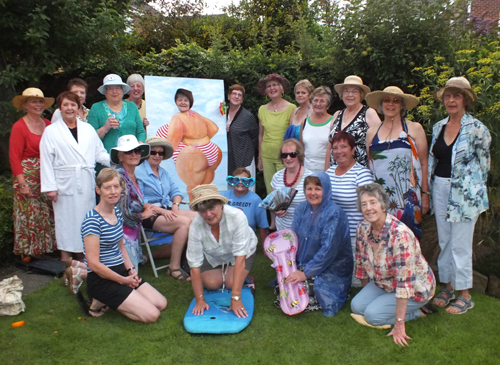 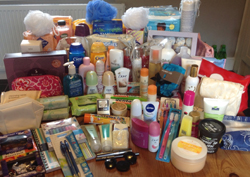 Much fun and frivolity was had at the Beach party held at Pat’s in aid of the local refuge.

Many donations  of much needed toiletries, towels and baby clothes and £30 cash were received .

A Day at the Races 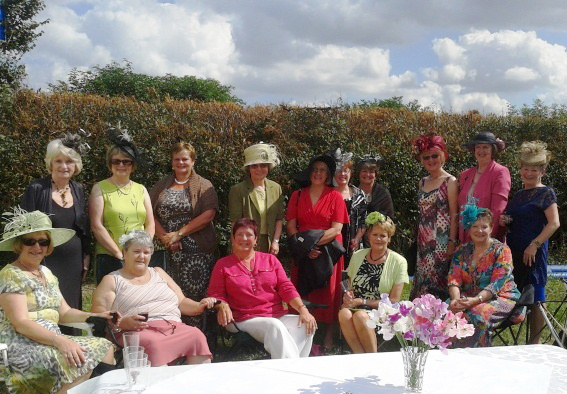 The next event (August is supposed to be our quiet month!!) was Ladies Day at York.  Dressed to kill, beautiful weather, champagne picnic – what more could they ask for?  Winning horses I suppose – I don’t think that happened.

22nd September saw several of us enjoying what was a late summers day, picnicking in the beautiful grounds of Nostell Priory.  Lazing, chatting and, for the more energetic, strolling gently.  Which is what we did before reluctantly heading for home at the end of what must be a wonderful summer. The Macmillan Coffee Morning was a great success, it was held at Tentercroft Court in Dewsbury, we had a cake stall (far too many cakes for the waistline!), a tombola, guess the name of the dog and a raffle.  The residents thoroughly enjoyed themselves and we raised £571.00 for Macmillan.

Kim and her sister from Hope Pastures (The Phyllis Harvey) Horse and Donkey Trust gave a presentation about their work.This is a rehabilitation home for horses,ponies and donkeys which have been neglected, ill treated or abused. The trust has won many awards and relies solely on donations and is run mainly by volunteers. The sanctuary is open every day and welcomes visitors free of charge. An annual subscription of just £15 helps to feed and look after the animals in their care. 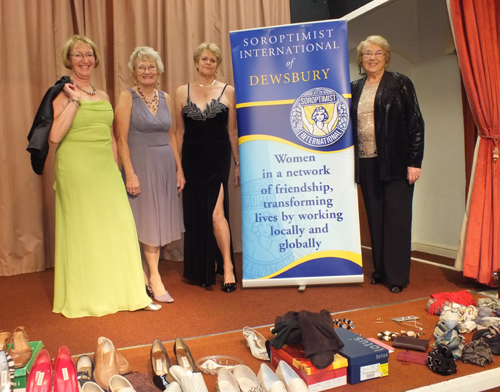 The Fashion Show was held in St Ignatius’ Parish centre in Ossett.The fashions were many and varied, even a pair of shorts made an appearance. The clothes were well modelled by four of our own members and afterwards everyone had a wonderful time scouring the rails for bargains. We raised over £400 to go towards the school fees of Tracy Waitherero in Kenya. Dewsbury organised a Christmas Party for the residents on Saturday 7th December.We played silly games such as Beetle and Pass the Parcel and ate good old fashioned Christmas fare – ham sandwiches, sausage rolls, mince pies, cake and jelly and trifle.The residents said that we always give them a good ‘do’, but, this one was special.

Pic right: Linda and Pat as the Angel on the Christmas Tree 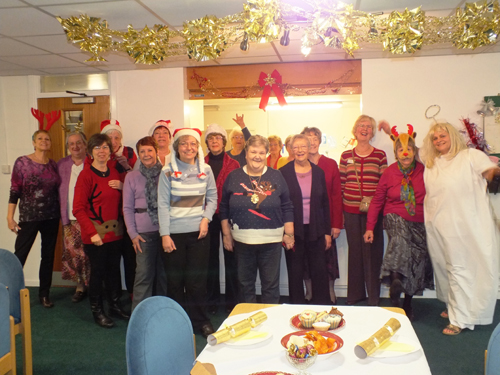 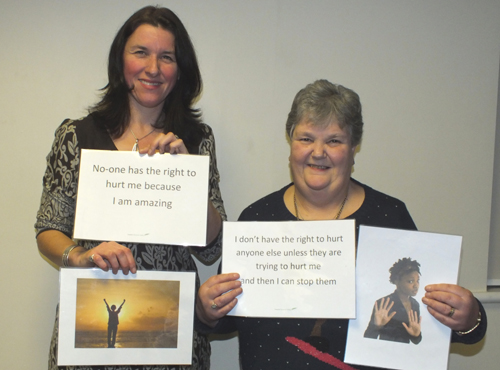 Julie Tweedale is part of a small team of two who organise workshops in West Yorkshire, helping women find physical & emotional strength to take control of their personal safety. Julie gave an emotional talk on the events which led her into what she is doing now and how she has helped women come to terms with their lives.

After the speaker and business, members enjoyed Christmas drinks and nibbles in the conservatory 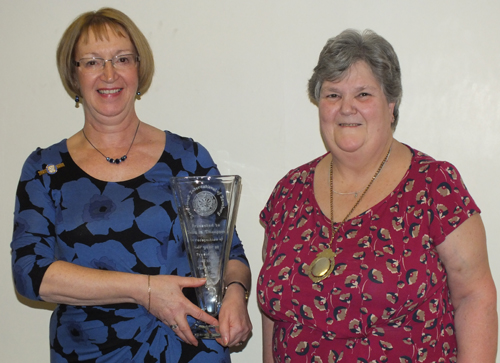 Julie Thompson a member of our club, was Yorkshire President last year.  As recognition of her work in Yorkshire last year, SI Dewsbury & District presented her with an engraved cut glass vase, presented by SI Dewsbury President – Janet Town. 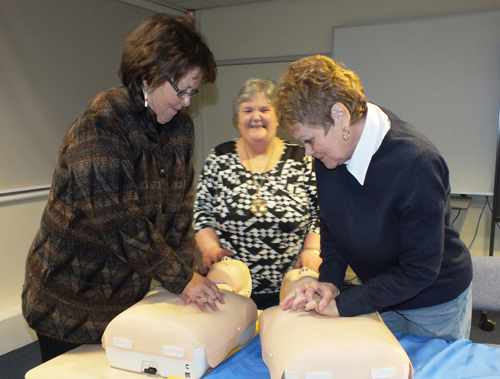 At the first speaker meeting in 2014, this was a very interesting presentation by member Sarah on the subject of resusciation. As an experienced member of the medical profession, she was able to instruct us, along with practical demonstrations on the expediency and ways of dealing with heart attacks, strokes etc. She was accompanied by two ‘models’ and so was able to show the technique of mouth to mouth resuscitation and heart massage. She encouraged members to ‘have a go’ and many did. A very important lesson was learned and the evening was a great success. February is now the designated month for The British Heart Foundation to raise awareness and fund raise.
“Mending Broken Heart’s is a research arm of the Organisation dealing with heart muscle regeneration after a heart attack,research is all ready providing vital clues about how the human heart could be repaired,it is hoped that within the next five years clinical trials will begin,but there is still work to do,and the British Heart Foundation has always been at the cutting edge of research.
Soroptimist International of Dewsbury & District became involved as our President Mrs. Janet Town has chosen “Mending Broken Heart’s” as her Charity,several fund raising events have taken place over the year,
For one week at The Mill Batley from the 10th February 2014 to the 16th February 2014, Red was the predominant colour, tills at the mill were branded up with current literature, balloons, badges and collection tins.
Members of Soroptimist International of Dewsbury & District manned the collection tins over the week, collecting an amazing 447.78 along with 727.68 collected by the shops to make a magnificent total of £1,175.46
Photo above: L-R June, Eileen H, Eileen B and Linda doing their stint

A joint social evening was held at the St John’s Lodge on Saturday February 15th, members enjoyed a quiz and Pie and Pea supper. The proceeds of the evening were for the local Holly Bank Trust 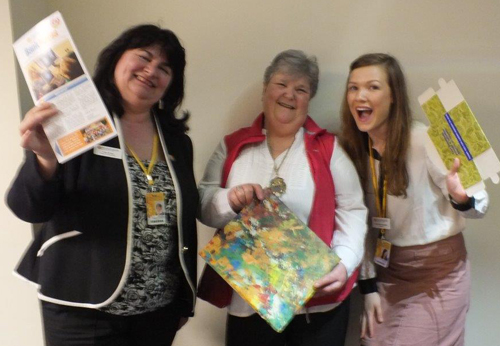 Our speaker was Julie Shaw & her colleague from Holly Bank Trust in Mirfield. Their work is caring for people with severe physical & mental disabilities.Julie showed a film showing the dedication, affection and commitment of the Holly Bank staff, and a second fun film showing staff and pupils having a good time. President Janet (pictured above, middle with Julie Shaw on left) presented Julie with a cheque for £200 raised at the recent joint social with St John’s Lodge.

Friendship Co-ordinator Pat , Freda  and Chris  visited SI Preston for the celebration of their 75th Anniversary. A gift of £75 was given to the club. A Charity Rummage Sale and Coffee Morning was held at the Oakwell Motel, Birstall  from 10.00-2.00 to assist with  raising funds to support Tracy a young girl in Kenya with her schooling.

The rummage sale included ladies clothes from designer brands to high street stores, with the strap line ‘come along for a coffee and a chat and pick up a bargain at the same time’.

The last speaker meeting of the year was Anita Smith a retired police officer. Anita spoke about all the good times in the police force, but, also, about the sex discrimination she encountered and how she overcame it.

After the business meeting the “fun” began. We aimed to turn wine into water for Water Aid.

Club members had a glass or two of wine etc to drink whilst taking part in 2 quizzes. One of the quizzes was based on old money. The other one was about water!! The inventor of the modern flushable loo raised a few laughs (Thomas Crapper). IPP Janet Town presented BHF representative Sue Green with a cheque for £3,000 at the end of her presidential year. A magnificent sum raised by many fund raising activites during the year