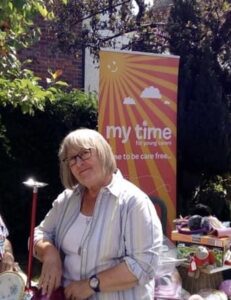 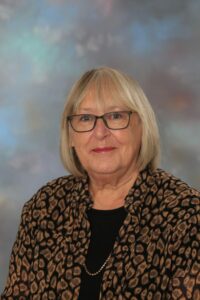 Barbara joined SI of Epsom and District in the year 2000, transferring to SI Woking in 2020. From the beginning her passion was Programme Action and she quickly became involved with our existing Young Carers Project, set up through Surrey Clubs for Young People.

This project was hugely successful and Barbara’s enthusiasm and commitment played a big part in its growth and management. She visited the children and their parents/carers, who had been put forward by teachers and social workers, explaining the support the children would receive and often helping families with wider difficulties.

Volunteers were found to take the young people to and from Club evenings, to help with refreshments, activities and support. Barbara herself would be there on almost all the Club evenings helping with craft activities and more importantly getting to know the young people better and to understand their needs. It was very rewarding to all of us to see them grow in confidence with her support.

Barbara had boundless energy and as well as her direct involvement in the project she gave talks to raise awareness of the problems many children and young people faced and to attract the financial support which was so important. For several years she organized Exhibitions of the work of women artists at Bourne Hall as well as providing Table Top sales with Jane to help raise funds for the project.

After an unsatisfactory spell when the contract went to another charity, it was decided a new organization My Time for Young Carers should be set up to fill an identified gap in local provision. Barbara led the considerable input from Epsom Soroptimists and other agencies, working very hard to find more volunteers and funding. She completed the application to register My Time as a Charity and after five years as Chair of the Board of Trustees, Barbara stood down to use her energies elsewhere.

Barbara was very keen to support and raise the profile of women being trafficked and, with club members support, she very enthusiastically organised a Trafficking Conference. Her many contacts in the community ensured this was very well attended and successful. As one of our members said, Barbara was always ready to roll her sleeves up to get the most out of any project she became involved with!

Following a study visit organised by SI Southern England to friendship link South Africa, Barbara proposed that the Region set up a volunteering project to enable a young woman from our area to volunteer in Pretoria, working with agencies already partnering with SI Pretoria.  The aim was for the volunteer to develop her experience, skills and confidence while helping young people in Pretoria.  Supported by her club, Barbara promoted this to Region and the Volunteering in Pretoria (VIP) project was born.  A volunteer was selected by the joint team and started work in South Africa.

VIP was reviewed after the first year and it was agreed that the funds provided by Southern England would be better used to recruit a local young woman as volunteer.  After further consideration two volunteers were appointed and stayed with the very successful project for two years.  This project has now been renamed the Barbara Watts Volunteering in Pretoria project.

Barbara also used her skills, enthusiasm and experience for projects in Sutton.  As a woman enthused by developing projects in her local community as well as a committed Soroptimist, Barbara richly deserved the ‘Lifetime Achievement Award’ presented to her by Sutton’s Community Centre. We, in Epsom, Woking and Southern England Region, are all proud of everything she achieved.