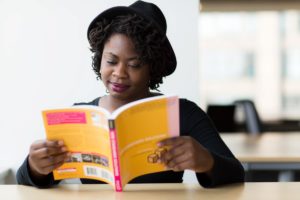 Have you ever really enjoyed a book and wanted to tell someone about it? Now is your opportunity to do just that! Please do contribute to this list of books recommended by Club members. You can email  us about a book that you have enjoyed and would like to share with others. It need  not be a long review, even two or three sentences is sufficient. veronicasiepsom@gmail.com

This page  will be updated and new books added so please check back from time to time.

This is a book every girl and every woman should read to understand why life presents so many problems for us – from cars and car seats designed for men, to the design of smart phones, the provision of toilets, the proportion of time women spend doing unpaid work, drugs being trialled only on men and the male-based algorithms.  The list is endless!  It has been comprehensively researched and illustrates, in a way I have not seen elsewhere, the importance of girls doing STEM subjects and reaching positions of authority and power in all aspects of life.  The only way for women’s voices to be heard is to keep proving the case and keep raising these.

In Caroline’s words – the gender gap is both a cause and a consequence of the type of unthinking that conceives of humanity as almost exclusively male.

A History of the World in 21 Women by Jenni Murray

Jenni Murray uses her incomparable interviewing skills to present short biographies of the lives of 21 women who were outstanding in their field and in the world of their time.  From an Egyptian pharaoh to a modern pop star, Jenni illustrates how all these women overcame all the issues and prejudices of their time in the way of their time to become pre-eminent in their fields.  This is a ‘must read’ book for any girl planning her future!

Factfulness: ten reasons we’re wrong about the world – and why things are better than you think by Hans Rosling

This book makes you think about how you get your view of the world and whether it is correct. It shows how much we are influenced by headline news and don’t know about research, how this affects our knowledge and understanding, and how we all reach our decisions.  The illustrations highlight, for instance, 16 bad things in the world decreasing and 16 good things increasing, showing how the world has changed over time.  How much do we know, think we know or do we think things are bad because they used to be?  Or perhaps it is because we are told they are so that we fund a certain project or support a particular view.

This book is an excellent read and inspirational as it shows how much can be achieved by initiating various ideas and schemes to assist underprivileged girls and women. In particular those who come from poor area’s or are from black communities.

I am Malala by Malala Yousafzai

Malala is the girl who in her homeland Pakistan stood up for education  and was shot on her school bus by the Taliban On 9 October 2012..

The book is dedicated  ….to all the girls who have faced injustice and  been silenced
TOGETHER WE WILL BE HEARD…..
This is a powerful book covering her life up to and beyond the shooting.
Malala says …. ‘my family has been through many changes. We were plucked from our mountain valley in Swat Pakistan to a brick house in  Birmingham U.K.’  Malala received medical treatment and continued her education finishing at University of Oxford with a BA in Philosophy Politics and Economics (PPE)
Malala has gone on to receive many Honours and Awards Including the Nobel Peace Prize in 2014.  She has also founded The Malala Fund to break down the barriers preventing 130 million girls around the world from going to school
Do read this book and on Wikipedia you will find details of all the recognition Malala has received since that fateful day when she was shot on the bus.

This is a true story of how a young Sikh woman, Surjit, in a forced marriage, suddenly disappears without a trace in India. She was someone who lived in the UK but because she began to embrace a different culture and wanted everything that entailed i.e. her freedom, this was seen by her husband’s family as going against all that they believed in. Her sister in law, Sarbjit, takes up the quest to find out what happened to Surjit and in doing so, endangers her own life. As a result of what took place, Sarbjit has now formed the charity True Honour which supports victims and families going through the horror of honour killings and other domestic abuse. This book  is very engaging and delivers a hard-hitting story line, difficult as it is to believe that events such as these take place in ordinary families in the UK as well as globally.

The Sealwoman’s Gift by Sally Magnusson

This is a fascinating book based on historical facts which took place in 17th century Iceland. It is the story of  several women and their children who were sold into slavery by pirates and taken to a harem in Algiers. I found it very engaging and the fact that it took place over 400 years ago and is still relevant to today with human trafficking, persecution, the refugee crisis and ongoing wars. Sally Magnusson, the writer and broadcaster, really does bring the characters to life, and this is definitely a page turner!

This is a heart warming story about a young woman who finds it hard at first to befriend people and those around her find her quite different from themselves. As time goes on, she meets new people and begins to change her opinions about them and her existing friends. In particular, it is interesting to see how Eleanor’s relationship with her mother develops.  I like it because as the story unfolds, you learn more about Eleanor and why she behaves the way she does.  It has both humour and sadness in it, the balance is just right.

Being asked about reviewing a book for World Literacy Day made me think back on things that I have already read.  Thinking also about the charities we are endeavouring to support I am re-reading SHAME by Jasvinder Sanghera.  Jasvinder, after very difficult and heartrending experiences, has set up the charity Karma Nirvana which is there to help those forced into marriage.

Her experiences growing up in a society where doing what is expected of you to conform to certain attitudes and behaviours is so revealing and totally different to the society that I know and the manner in which I was brought up and how I have raised my children.

Her experience was that she must do what her society demands of her and she is not allowed individuality.  Even though she breaks away from her family to avoid an arranged marriage, she misses them so much and longs for their love and understanding.

I have not quite finished my re-read, but what I have read so far has really made me think how lucky I am to have had a loving family which nurtured and supported me.

I was living in Paris during the last years of Josephine Baker’s life so knew quite a bit about the myth  before starting this book, including her very last television appearances.

This book is 500+ pages and in fact proved that I hardly knew anything about her. Reading about her chaotic behaviour that hurt everyone she met can be overwhelming. You question how she was able to maintain a career or intimate relationships at all. Jean-Claude Baker is not the usual biographer as he is ever present throughout the book making asides, analysing his adoptive mother’s words and questioning/confronting her decisions. “The Hungry Heart” is an in-depth, exhaustive portrait of the best Josephine Baker was, but in reality exposes her worst.

Based on twenty years of research and thousands of interviews, this authoritative biography of performer Josephine Baker (1906-1975) provides a candid look at her tempestuous life. Born into poverty in St. Louis, the uninhibited chorus girl became the sensation of Europe and the last century’s first black sex symbol. A heroine of the French Resistance in World War II, she entranced figures as diverse as de Gaulle, Tito, Castro, Princess Grace, two popes, and Martin Luther King, Jr. Yet Josephine was also, as one critic put it, “a monster who made Joan Crawford look like the Virgin Mary.” Jean-Claude Baker’s book also reveals her outbursts that resulted in lasting feuds, her imperious treatment of family and entourage members, and her ambivalent attitudes concerning her ethnic background. The Hungry Heart aims to reconcile Josephine’s many personas – jazz-age icon, national hero of France, proponent of Civil Rights, mother of children from across the globe.