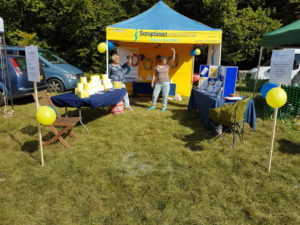 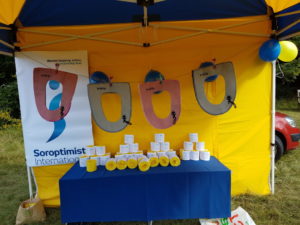 Our aim was to raise funds to tackle lack of water and sanitation in an overseas community and to raise awareness of this need. Following a presentation at Conference,  we decided to raise funds to donate to Toilet Twinning, to tackle the lack of water and sanitation in a country overseas. We organised a Quiz evening to raise funds. Club raised £634 to donate to Toilet Twinning which has provided toilets for 2 schools in Malawi. Awareness was raised for 64 people who attended the Quiz and others who were invited and one member spoke about project to members of SI Windsor, California. The display was left up in the school venue for a week so that staff and students were also informed.  Quote: Your twinned toilet is helping to flush away poverty.

In September  2019, at Polesden Lacey Derby Day,  a stall was set up to help raise awareness and raise money for the Toilet Twinning Project. The stall  had a ‘poo throwing’ activity whereby adults and children were encouraged to throw ‘poo’ through hanging toilet seats. All participants were given wrapped toilet rolls with an  information sticker about the project.  Not only was this a lot of fun but Epsom Soroptimists were able to talk about the project and Soroptimism with members of the public.