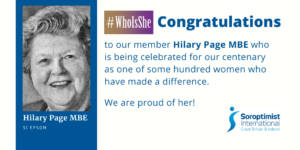 Hilary has been a Soroptimist since she joined SI Lewisham in 1972, where she was a valued mentor to club members for 25 years, before transferring to SI Epsom when she moved house to live next door to her son and his family. She has served at all levels of Sorop0mistInternational, from Club level to leading the global organisation as International President in 1997-9. She served as Club President in1975-76, Regional President (London Chilterns) in 1980-81 and as Federation President in 1989-90. Her outstanding service to the Federation was recognised with the awarding of Honorary Life Membership of SIGBI at the Federation Conference in Brighton in 2011.

Her ‘day job’ was that of a civil servant, within the (then) Department of Employment where she chaired many committees, produced development plans and budgets, prepared briefing papers for
Government Ministers, replied to Parliamentary Questions and participated in many national and international meetings. Her Senior Executive post within the Group Personnel Unit (Human Resources) involved the development and implementation of an Equal Opportunities Policy throughout the UK Civil Service, covering part time working, job-sharing, flexible working hours and childcare provision. She was responsible for the development of a confidential counselling service for staff, leading a team of 42 counsellors including their training and development. Hilary also initiated health promotion policies including stress management, HIV/AIDS awareness, and drug and alcohol abuse.

She was awarded the MBE in 1991 in the Queen’s Birthday Honours List for public and voluntary work. When presenting the award to Hilary the Queen commented on the fact that she had travelled widely and said ‘you are lucky to travel and meet people in their own homes’, implying it was something she envied.

Hilary continued to play an active role in the international advocacy arena. She served on the National Committee of UNICEF, and her first International President’s Appeal in partnership with UNICEF generated funds to support the education of children in India needing to work to support their family. She also served on the National Committee of UNIFEM (now UN Women), and in 2000 after the adoption of UN Security Council Resolution 1325 on women and peace and security, she helped establish an organisation called GAPS (Gender Action for
Peace and Security). GAPS is a network of development, human rights, humanitarian and peacebuilding NGOs which promotes, facilitates and monitors the meaningful inclusion of gender in all aspects of UK policy and practice on peace and security.

In 2018 Hilary’s outstanding contribution to the women’s movement, and her lifetime commitment to gender equality, was recognised further with the presentation of a NAWO (National Alliance of Women’s Organisations) Elder Award. 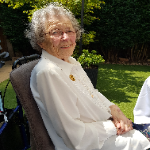