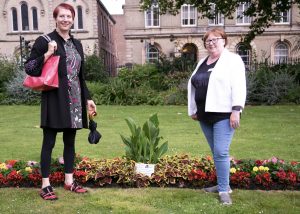 Club Programme Action Officer Julie Williams with member Jo Reynolds were pleased to attend on behalf of the club the judging of the Anglia in Bloom competition in King’s Lynn.

Members of the club are committed to continue to support by helping to keep the town pretty in bloom. 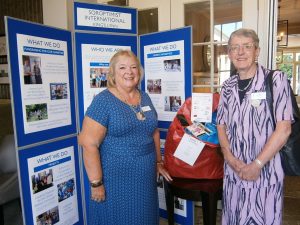 Guests, including other Soroptimist members from the London Anglia Region and from Friendship link clubs, were able to mingle on the terrace with Co-Presidents Janet Porter and Lynis Lord in the warm sunshine until lunch was served.

Grace was said by President Lynis.  Past Federation President Elizabeth Harrison spoke of the principles of Soroptimism and of our present club charities, which include The Pandora Project, Lend with Care and UNICEF School in a Box.  President Janet proposed the Loyal Toast. 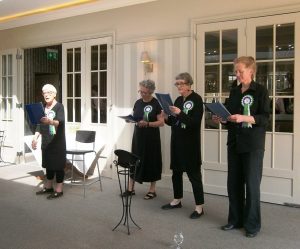 After the meal Three’s Company, a local Drama Group, performed their dramatic sketch “Votes for Women” to everyone’s enjoyment.

During the lunch the club completed the collection for the Diamond Education Grant charity, a Soroptimist International project that helps women undertake vocational training.   A large red sack containing 22Kg of unwanted jewellery, assorted coins, old mobile phones and other items is now on its way to be recycled for the good cause.

Our July Speaker was Tracy Mahoney from the Pandora project, which has been adopted as one of the club charities for this year.

Tracy founded the Pandora project in 2013 to provide support to women who had suffered domestic abuse and to empower them to regain their self-esteem and independence.  The project runs a 10 week course entitled “Open the Box”.   Each session combines insight into an aspect of domestic abuse and peer support to develop the confidence of the participants. 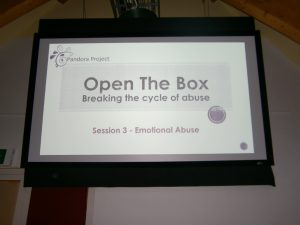 The club were given a taste of one of the sessions, focusing on emotional abuse and its impact.  We were introduced to the techniques used by abusers to “groom” and then control the women involved and the profound effects of this form of abuse in producing guilt, depression and anxiety.   The effect of trying to put ourselves into the shoes of the abused women was very thought provoking.

The course has been shown to transform lives but referrals for places on the project are currently more than they can accommodate.   They are hoping to increase the number of trained staff available.

In June the club hosted a talk by Louise Clayette on Gender and International Development.

Louise is bilingual and originally comes from Aix-en-Provence in the South of France. She has been completing a degree at UEA in International Relations and has just finished her Masters. Louise took a m 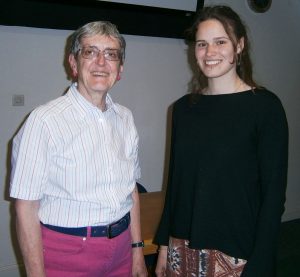 odule on Gender which sparked her interest in particular when she was in New Zealand studying Masculinity and Gender, Justice and Crime.

Even though this was Louise’s first public speaking event but she made the talk very interesting. Louise had found that gender inequality is deeply embedded in society and women are socialised to speak differently from a young age. We need to be aware that there is still a gender inequality in our own culture as well as in other countries.

Women are becoming more aware that assets increase power in decision-making in the family. In developing countries where there is an improvement in economic empowerment and women earn more money through their micro businesses they then spend more on their family and in the community, but this can cause issues within the family. It is therefore important to include men in projects and mainstream gender equality.

There was interesting discussion during the meeting, especially about the different ways in which gender inequality exists even in the UK today.

Louise is due to leave shortly for India where she is spending 8 weeks working at the Society for Women’s Action Initiative in Gujerat. 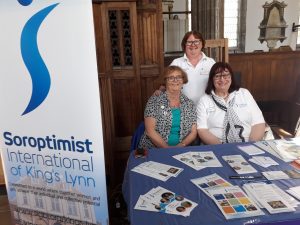 One of the theme for the event was lost species and the club chose elephants.

The event is always worthwhile attending with numerous stalls and activities.