We are sad to report the loss of Dr Jan Harding, who was a member of SI Winchester for many years. She joined our Club in 1993, not long after she and her husband Arthur moved to Alresford. She was a great asset to the Club, with her extensive knowledge and expertise in the women’s movement, her deep concern for gender equality issues and especially, her professional expertise in STEM and related issues. She was President of SI Winchester twice; in 1997-8 and again in 2001-2 and she also served as our representative on the Winchester Domestic Violence Forum, which was originally established by our Club. 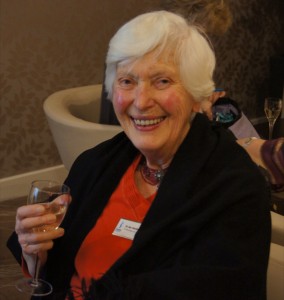 Jan, pictured at our Annual Function in 2013

A very perceptive and committed member, she nearly always had that incisive observation or comment to make in a Club debate. Often ‘off the wall’, usually provocative, but always worth listening to, she offered wise advice and thoughtful contributions to our discussions. In later years her failing health prevented her attending meetings but she was kept up to date by visits from members, reading the magazine while her sight permitted and scrutiny of the minutes! She attended and supported social functions when her health allowed.

She finally retired from membership but still believed deeply in the Soroptimist cause. She died peacefully on 10 July, aged 93, at Pemberley House Care Home in Basingstoke. More information about Jan’s life and also details of funeral arrangements can be found here.