At the start of the 16 Days of Activism against Gender-Based Violence Campaign, local Soroptimists added their voice to the international campaign to end violence against women and girls around the world. 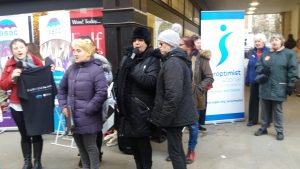 Soroptimist International of Winchester was one of the groups who supported the event in Winchester on Monday 26 November for Community First against Domestic Violence. The University of Winchester has formed a choir with some of the ladies from Trinity House, the agency which houses women escaping from domestic violence. The choir has written a song which tells of their experiences and the support from Trinity. This has been recorded with help from the University. The choir sang several times between the hours of 11am and 1pm and attracted attention where we were in a position to talk to bystanders. The police are in support of this initiative and were also in attendance. The Mayor of Winchester came to lend his support. 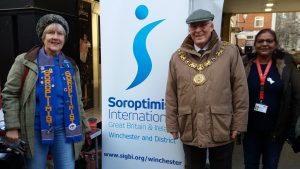