As it is summer break activity has been limited but we have had two events when members and friends have come together. The first was the Annual Garden Party held by kind permission of Nerys and husband Allen. The weather was kind, company good and the food absolutely superb.

President Jenny organised a Tour Guide from Bletchley Park to talk to club members before a planned visit in August. An excellent visit was organised when members and friends were shown the ‘inside’of Bletchley. It was a wonderful occasion and a number of members want to return to see even more of our national history. Sadly there was little opportunity for photographs to be taken but the one here shows some of our members concentrating, paying attention and listening to one of the guides.

Some of our members listening intently to a Bletchley Guide 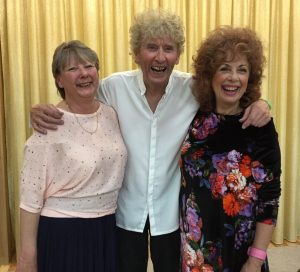 We had a great night on Friday 29th March when Dandy Comedy Duo, Glyn & Alan, entertained 100 Soroptimists and guests. Plenty of laughter, friendship & fun as always together with a delightful fish & chip supper. If you are holding a raffle during the evening ask Alan to officiate- he is superb-raffle will never be the same again!
Thank you Dandy.

SHARED FROM DANDY FACEBOOK PAGE.
“Friday we were over at COVEN VILLAGE HALL for the BILSTON AND DISTRICT SOROPTIMISTS. We know several of the ladies from past times. Great to see our good friends and someone I worked with way back in the mists of time. Graham Lee worked in the Health Dept. above the Public Library where I worked at Darlaston Town hall. We go back about 52 years!!! Great to see him again.
Wonderful audience. Good to meet Lorraine who is Head Teacher at Green Park Special School. Some of the money raised on the night was going to them along with other Charities chosen by President Gill Wilson”.

Let’s have a Charity Garden Party on the wettest week-end of this wonderful summer to test the stamina of SI Bilston members and their friends. Choose the wettest Thursday evening to erect a marquee (just in case of bad weather) and give the garden the final touches during a thunder storm, the next day.
On Sunday, the day of the event, after torrential rain, members were blessed with a two hour ‘window’ to enjoy excellent company, fantastic food and plenty of laughter whilst raising money for others. Two members had produced lovely craft items to sell. Even the weather can’t dampen the spirits of Bilston members and their friends!
What’s not to like? 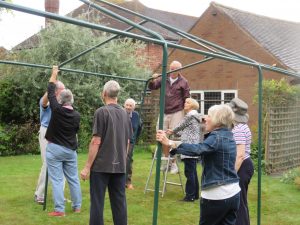 Where did this fit? 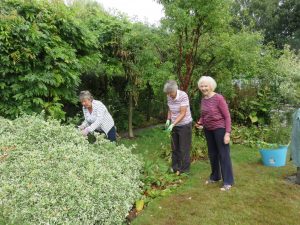 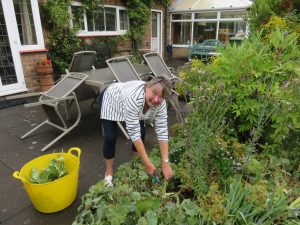 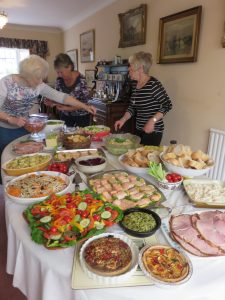 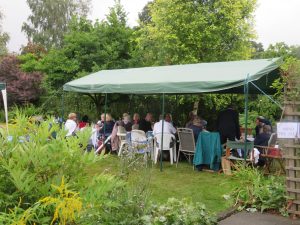 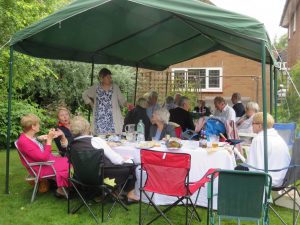 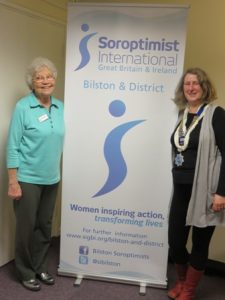 At the  AGM in April  2017 Jackie Brookes presented a customised banner to the club.  This was a gift from her to commemorate  50 years service to  Bilston Club and Soroptimism.

Members were very thrilled and will use the banner to promote our work as often as possible. 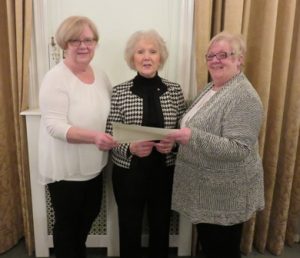 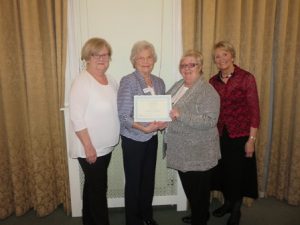 We were reminded that Nerys had been President and was central to a Home Office Committee on Prostitution.  She is a great ambassador for Programme Action.

Jackie has been President 3 times and is passionate about Programme Action.  She is a joint officer for Programme Action and has been for some time.  In 2014 Jackie received an MBE for her service to Bilston club a very proud day at the Palace.  Flowers, cards and a silver spoon were presented to Jackie at the Dinner Meeting.

Decorating Bedrooms in the local Women’s Refuge for the second year running.

Members with some husbands, a son and a nephew turned up with ladders, brushes, paint (kindly supplied by Dixons), cleaning materials, masking tape etc. to decorate two more bedrooms at our local Refuge.  We had decorated the first two in January 21015.

With little hesitation work began in both rooms and everybody found themselves a job.  Just occasionally the emulsion covered the gloss but those small problems were soon overcome by those who knew what they were doing!.  Much laughter and gossip ensued throughout the day, hopefully not disturbing the residents too much.  Apart from a very short break for lunch and much tea and coffee on the move the majority of the work was completed by the end of day 1.  All that was left to do was to hang replacement curtains in one room and to lay carpet and underlay in both rooms.  A job well done, thanks to all who helped. 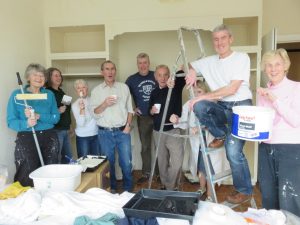 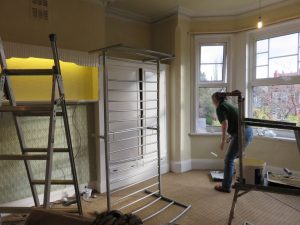 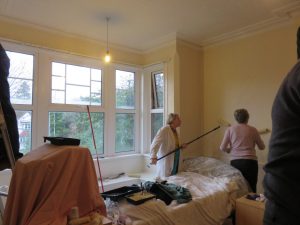 Betty Vaughan celebrated her 90th birthday with members at the January Business Meeting.  President Jan expressed our good wishes to Betty  and we enjoyed birthday cake and wine.  She joined SI Bilston & District club in 1975 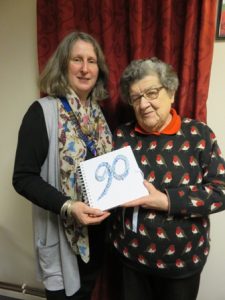 and was Club President in 1981/2 and again in 1989/90.  In between those years, in 1985/6, Betty held the office of Midland Chase Regional President. Betty continues to play an active part in club matters and attends Region meetings as well as other club events.

The Annual Charter Lunch was a very joyful occasion on a lovely September afternoon where we welcomed not only our guests but also Barbara (looking a little better after her traumatic experience) and her family.  The speaker was Barbara’s cousin, Densign White, husband of Tessa Sanderson.  He entertained us with the story of his sporting journey and his Judo career internationally and as an Olympian.  Soroptimister Norman Gibbins proposed the toast to Soroptimist International and Regional President Alyson Green responded.  Carol  Holdcroft from our daughter club Cannock responded on behalf of the guests.  We were delighted that Barbara was able to thank Densign. 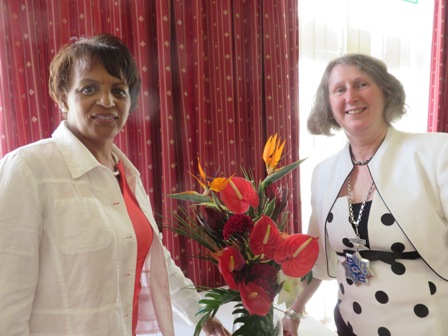 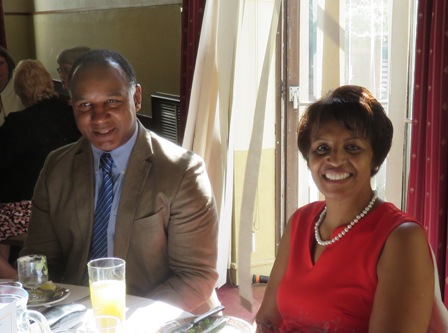 Speaker Densign with his cousin Barbara

The club held two happy events during the summer break and raised money to support the President’s Charities.  The first was a coffee morning kindly hosted by June and Norman.  The bacon butties were a real bonus made by Norman. 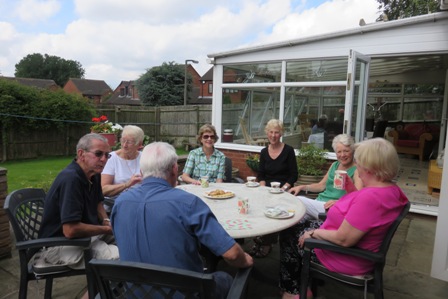 The second event was a Garden Party when Allen and Nerys allowed us to use their lovely home and garden.  As always the food provided by the social committee was superb.  It was wonderful that Barbara was able to join us as she is recovering from major heart surgery. 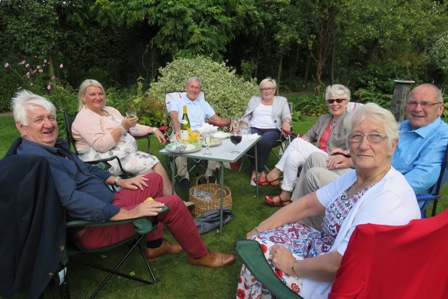 Visit to the Houses of Parliament

President Pat wanted to end her year in style so the day before the induction of Barbara into the presidency, 4th April 2016, sixteen members went to London to the House of Parliament to meet our local MP Pat McFadden (or so we thought)!  Norman, June’s husband was our driver and courier and he and June looked after us all very well indeed.  The visit was excellent, giving us a good insight into the workings of both Houses.  Both House were in recess which gave us access to the benches, speaker’s chair and the Queen’s robing room.  Unfortunately, although we had arranged to meet with the MP when it came to the appointed time he had to send his apologies due to parliamentary work.  After the visit some members had Afternoon Tea at the Waldorf Hilton Hotel whilst the others had a little retail therapy in Convent Garden.  Well done Pat you managed to educate, empower and enable your members! 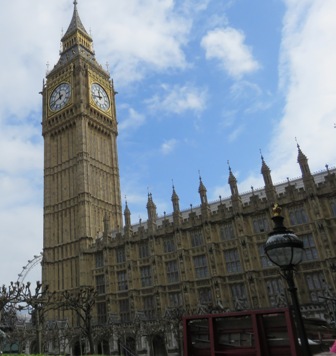 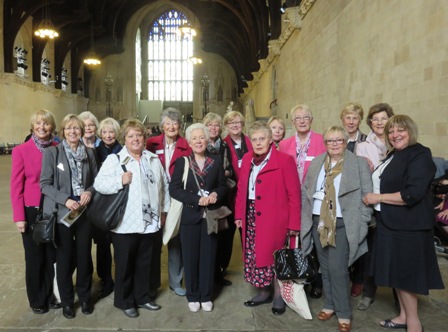 During the run up to Christmas members collected items for shoe boxes and at the Business meeting in January 2016 small groups packed many boxes.  Much fun was had when items such as toothpaste, hair brushes and hats were surplus to requirements and the evening became like a Table Top sale without the cash!!    The boxes were sent to International Aid Trust via the good offices of member Jan Gray. 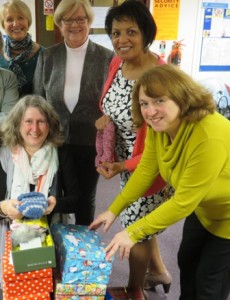 On a sunny afternoon 100 Bilston Soroptimists and their guests celebrated 72 years of service since the club was chartered.  Members and guests enjoyed a Champagne Afternoon Tea, in the presence of the Mayor & Mayoress of Wolverhampton and the Regional President Carol.  Entertainment was provided by String of Pearls whose music represented 1940’s.  Afternoon tea was served by the staff at Linden House and it was a very enjoyable, friendly afternoon.  Margaret Inett past member, now a member of SI Brixham, Devon, lit the Friendship candle. 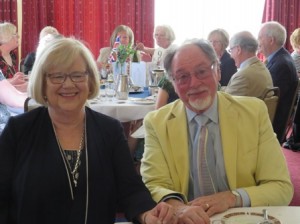 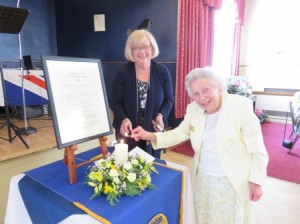 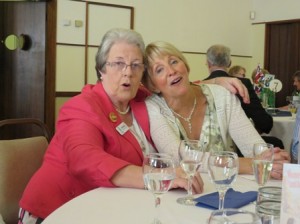 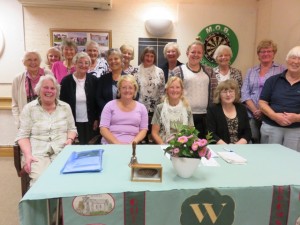 During August Moreton WI members invited Sue & Jackie to their meeting to give them an insight into the work of Soroptimists, having heard the word often mentioned in the village!  The audience was most receptive and interested to hear about some of the projects undertaken by Bilston Soroptimists.  Sue & Jackie shared the international structure of their organisation making comparisons between WI and Soroptimists, acknowledging the tremendous size of the WI organisation compared with Soroptimists. To give the WI members some idea of project work, Sue &Jackie explained the type of involvement Bilston club has had with their Programme Action work in recent years including, United Nations Gift Box event, Cardiac Risk in the Young Screening week-end, Forced Marriage campaign, ‘ Don’t let Go Balloons’, and Mary’s Meals. The evening was rounded off by the showing of a DVD taken in Barbados -The Bilston Camels, when Bilston club received an International Award.  Whilst judging the WI monthly competition, Inspirational Women, Sue & Jackie enjoyed typical WI hospitality. 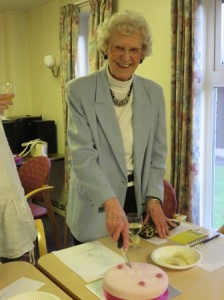 On 7th July 2015 at the club business meeting members recognised a very special birthday.  Joyce Abrahams has been a Soroptimist for many years originally in Dudley Club until it closed. She then transferred to Bilston Club and is a very valued member.  She celebrated her 90th birthday ( or should that be 59th ! ) on 1st June and was thrilled when her family organised a big party with relations travelling from within the UK and from abroad. The photograph shows Joyce cutting one of many birthday cakes. 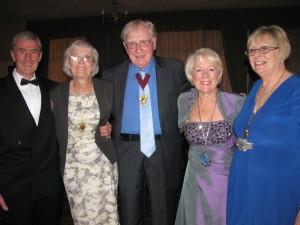 On Friday, 19th September members & guests were welcomed by President Lynne Eagle to celebrate the Club’s Charter with a Dinner in the presence of the Mayor & Mayoress of Wolverhampton City  and representatives from other Soroptimist Clubs and other organisations at Linden House.  The Peace Candle was lit by Bilston member Joyce Abrahams, Grace was said by Sheila Evans, Vision and Mission read by Josie Stevenson.  The evening was ably ‘ controlled’ by President Elect Pat Cross. Vice President Barbara Emanuel proposed the vote of thanks.  The Toast to Soroptimist International was proposed by Tettenhall Rotary President Ernie Edwards and the response given by President Edna.  Roger Webb husband of Bilston member Ann thanked Lynne for her toast to the Guests.

After dinner entertainment was provided by Sharon Burns, an opera trained singer who amused her audience with a wide range of musical items.Her rendition of Joyce Grenfell’s work including ‘Joyce the Librarian’ was highly amusing. She has a superb voice. 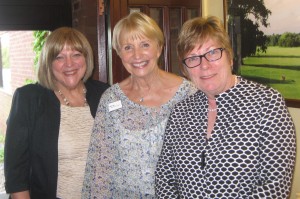 Several Bilston members attended the Midland Chase Region Conference held at Patshull Hotel Wolverhampton during the weekend of 17th/18th May 2014.   Regional President Edna’s conference was a great success and the photograph shows one of the key speakers, International President Ann Garvie with Bilston members Joan and Elaine.  Ann spoke with passion and energy. Even the weather was wonderful!

Congratulations to Betty Vaughan who on 17th June 2014 achieved 60 years as a Deaconess in the Methodist Church. President Lynne presented Betty with a plant. 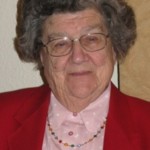 In January 2014 Joan Anderson celebrated her 90th birthday and instead of providing wine & nibbles to celebrate with club members Joan decided that £250 would be more useful to the club Charity account.   It was agreed to make a significant donation from that money to the Benevolent Fund, helping other Soroptimists in need.

Sadly, Joan passed away peacefully in September 2016.  She is sadly missed. 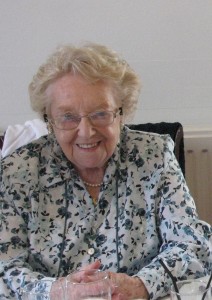