Jericho House is a small refuge for women in Wolverhampton.  There are 5 Jericho Houses in the UK but the one in Wolverhampton is the only one specifically for women, mostly women who  are victims of domestic violence.  Bilston club members have supported the refuge for some 30 years with on going donations of household goods and personal items throughout the years.  Previously club members have decorated bed sits associated with Jericho but on this occasion it was decided to tackle the redecoration of two bedrooms, in the main house, that were desparately in need of some TLC.

During the weekend of 23rd/24th January 2016 Bilston members and several husbands donned overalls and set about re-decorating two bedrooms at a Women’s Refuge in Wolverhampton .The club has supported this small refuge for many years.  The carpets were dire, the walls in one room a dark red colour and paint peeling off the ceiling in the other room.

With long handled rollers, emulsion, gloss and paintbrushes at the ready the group soon covered the ceilings ( very high as the house is an old Victorian building).  The red walls soon faded as the small rollers tackled the task and edges were completed.  Much laughter ensued but everybody worked very hard.  Norman then led the way with a second coat of emulsion on the ‘red’ walls.  ‘Where is the masking tape, this tape is no good it doesn’t stick, who’s pinched my brush, mind your hair I’m painting above you and who is making the tea’ all to be heard regularly.

The emulsion dried well which meant we could crack on with the gloss and by the end of Saturday the job was done.  A great achievement.  A Bilston member who has contacts with the carpet trade managed to get a good price for carpets for both rooms and these were fitted later in the week by a carpet fitter friend.  The results are super and all members and husbands feel very proud that we have made a small difference in Wolverhampton.  President Elect Barbara has suggested we do 2 more rooms during her year of office.  Must just go and clean the rollers!

We are very grateful to all members and husbands who helped, the carpet fitters and carpet provider but in particular we thank Waitrose Community Matters Scheme, Penn, Wolverhampton who featured our request for financial help in their December Collection.  The provision of £305 virtually covered all the expenses.  Thanks also to ASDA Community Life Champions for the provision of some equipment. 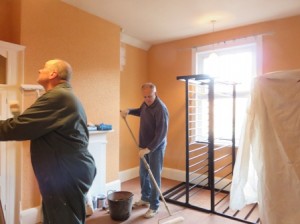 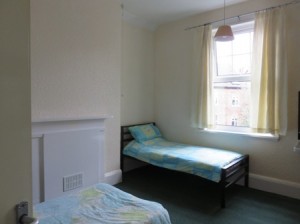 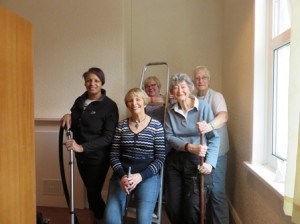 President Pat and two of the three PA Officers Joan & Sue admire the cheque received from Waitrose enabling us to purchase paint, new carpets and lampshades. 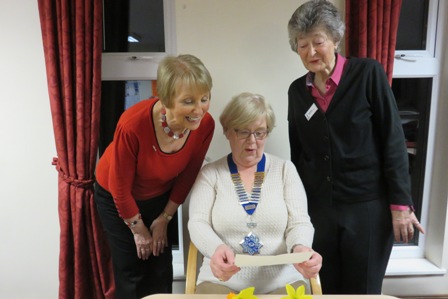 Joan President Pat and Sue show delight at the receipt of Waitrose cheque.

In the last week of September 2012 at the 67th General Assembly of the United Nations, world leaders talked about strengthening women’s access to justice.

These 40 young people around the world want to claim 25th every month, leading up to the 25th November which is observed as The International Day of End Violence against Women, as ORANGE DAY, a day for taking action. They are asking everyone to wear something ORANGE to generate interest and spark conversations about the issue.

Our members decided to do something a little different to recognise ORANGE DAY so we made quirky orange lapel badges and each member is  wearing one  on 25th of the month and talking about the reason for wearing it. 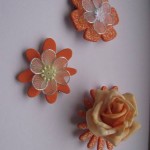