Bilston Soroptimists are proud to announce that member Jackie Brookes has been awarded an MBE in the New Year’s Honours for her service to Bilston and District club. She has also been recognised for her voluntary work in her village of Moreton. During her 47 years of service to Bilston club Jackie has been President three times including the 50th anniversary when she organised and produced a pageant, commemorating the five decades,involving all members.   As one of the club’s programme action officers Jackie is the driving force behind many projects including the Bilston Camels and a cardiac screening weekend for local  youngsters.  In the last 3 years she has led and continues to lead the club’s work on legislation relating to the criminalisation of forced marriage in the UK. Prior to this Bilston club became concerned about the damage caused by balloon debris.   Jackie led the research campaign to raise awareness of this issue and in so doing persuaded some local authorities to change their practice.
Jackie is passionate about the work of the organisation and works tirelessly to help make a difference. She motivates members to get involved and believes strongly in team work.  She is the last to take any praise, she ‘ prefers to be behind the camera not in front ‘ 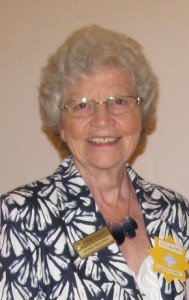 Sue, Pat and Joan were thrilled to be given the opportunity of accompanying Jackie on her visit to Buckingham Palace to receive her MBE.

Although the day started with lots of nerves and trepidation, once outside the Palace Gates, all of this was pushed aside as they became the centre of attention for a group of Japanese tourists all of whom wanted their photographs taken with them!  Celebrity status for an hour or two.

Once inside the Palace, they were overwhelmed by the beautiful decorative building and the friendliness of the staff.  The awards would be presented by HRH The Prince of Wales and would take place in the Ballroom where on a balcony The Countess of Wessex’s String Orchestra played music during the investiture.  Jackie and the other recipients went to a separate room for ‘instruction’ whilst friends and relatives took their seats near the front stage to await the Awards ceremony..

Prince Charles smiled and chatted with everyone, and it was wonderful to see Jackie walk through and receive her MBE and to hear the reason for her award- Bilston Soroptimists mentioned at Buckingham Palace.

Sue, Pat and Joan representing the club were very, very proud of her and pleased that all the hard work she had done for the club over many decades has been recognised with this honour.

A celebratory lunch ( a surprise for Jackie) at the Ritz Hotel enabled them to relax and enjoy fantastic food and fine wine. A fitting conclusion to a momentous occasion. 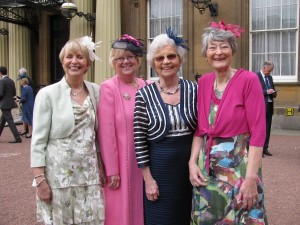 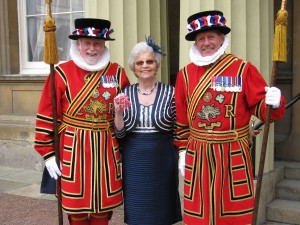 A proud moment shared with the Yeomen of the Guard. 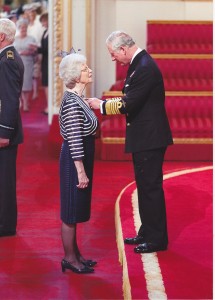