There are plans to erect a statue in Epsom’s Market Place in memory of Emily Wilding Davison.  The proposed artwork will take the form of ‘Emily’ sitting on a bench in the updated town centre. A real photo opportunity!  Christine Charlesworth MRBS SWA, has been selected to produce the sculpture and costs are in the region of £50,000.  Support from Epsom and Ewell Borough Council including a meaningful donation of £20,000 from unused town development funds is greatly appreciated and it is hoped that matched-funding can be attracted from the local business community.  Epsom and Ewell residents have been generous with their donations and it is planned to unveil the statue on Emily’s birthday – October 11th.The planning group has a good mix of specialists and enthusiasts, including Epsom Councillors.  It has been good meeting up with Irene Cockroft (SI London Chilterns) who is an authority on the work of the Suffragettes and the many other women who have worked tirelessly for gender equality and justice.   Phillipa Bilton, Emily’s great niece is also a member of the planning team and brings with her the family connection and an insight into the ‘real’ Emily and not just what is perceived through photos and articles.  Last October, an ‘Inspirational Women‘ dinner was held at the Grandstand, Epsom Downs Racecourse. A dramatic presentation of Emily’s involvement with the Suffragettes was staged, including the story of her hiding in a cupboard in the House of Commons.  It proved to be a truly meaningful event for women who have ‘made a difference’ locally and nationally.  Networking at its best!

Surrey’s Road to the Vote

The following are the notes from Rosie Everit – Project Archivist for the Surrey History Centre, who was our speaker in Marc 2018. 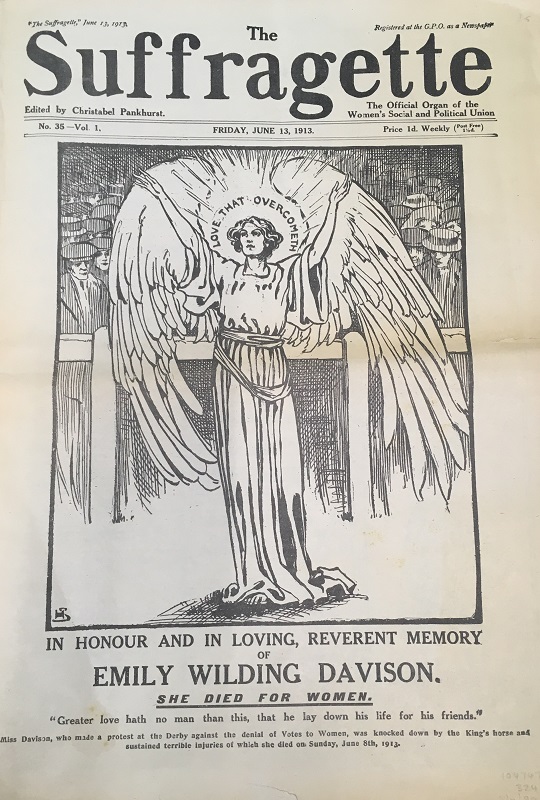 ‘’ With a donation made by SI Epsom and District, Surrey History Centre was able to purchase a copy of The Suffragette, dated 13th June 1913. The Suffragette was a newspaper produced by the Women’s Social and Political Union (WSPU), edited by Christabel Pankhurst, to raise awareness and funds for the suffragette cause.This issue was of particular interest to us as it commemorates Emily Wilding Davison, following the 1913 Epsom Derby, where she stepped out in front of the King’s horse and suffered fatal injuries. This record provides a wealth of insight into the event including eye-witnessaccounts, details of the inquest, and the worldwide tributes that followed. This edition was sold during the funeral procession for Davison, and includes tributes from key figures in the suffrage movement such as Emmeline Pankhurst and Constance Lytton. What is striking about this new addition to the Surrey History’s Centre’s collections is its significance, not only for Surrey, but for women everywhere in this centenary year of some women gaining the vote. This item was a particular favourite of the students who took part in our school workshops. We would like to thank the Epsom and District branch for this kind contribution to our project, March of the Women: Surrey’s Road to the Vote, which seeks to uncover the stories of the local women and men who were involved in the suffrage movement, and we look forward to continuing to work with Soroptimists International over the course of the year.”