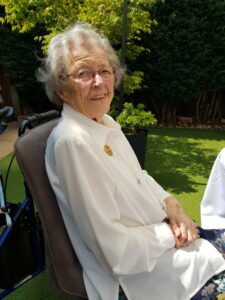 Hilary was a people person, mentoring and encouraging members of her first club, SI Lewisham, and still supporting members of SI Epsom and District club, to which she transferred in 2017, even during her final illness. She brought her skills and experience as a civil servant in the (then) Department of Employment (chairing committees, developing plans and budgets, preparing briefing papers for Government Ministers). As a Senior Executive she was involved in developing and implementing an Equal Opportunities Policy through theUK Civil Service covering part-time working, job sharing, flexible working hours and childcare provision.

Hilary was awarded the MBE in 1991 for public and voluntary work in the Queen’s Birthday Honours list. She was dedicated to the furtherance of women’s rights around the world, driving the enactment of UN Resolution 1325 on Women, Peace and Security and helping to establish the organisation Gender Action for Peace and Security. In 2018 Hilary’s outstanding contribution to the women’s movement, and her lifetime commitment to gender equality, was recognised further with the presentation of a NAWO (National Alliance of Women’s Organisations) Elder Award. We will all miss her – her knowledge, insight, wisdom and friendship.