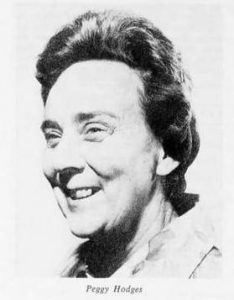 Peggy Hodges read Natural Sciences and graduated from Girton in 1942. She then went to work at Standard Telephone and Cable, London, in the aircraft laboratory, where she concentrated on communications equipment. After eight years she moved to the GEC Applied Electronic Laboratories in Stanmore, Middlesex, to work in the Guided Weapon Division. Necessarily most of her work there was secret, but she ‘starred’ in a BBC film shot in the late 1960s at the MoD guided-missile firing range at  Aberporth in Wales and featuring her work. At this time she was made an Associate Fellow of the Royal Aeronautical Society and was elected to a 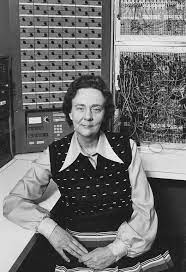 Fellowship of the Society in 1969 – then one of only three female fellows. In 1970 she received the Whitney-Straight Award for outstanding performance by a woman in the field of Aeronautics. This award comprised a specially commissioned sculpture by Dame Barbara Hepworth, presented by HRH the Prince of Wales at the Royal Aeronautical Society. Two years later she was gazetted OBE in the Queen’s Birthday Honours.

After her retirement from active engineering Peggy became involved in the Caroline Haskett Trust set up to encourage girls, by means of scholarships and competitions, to take up careers in engineering, Peggy was chairman of the Trust for many years. In 1978 she was also involved in the setting up, by the Institution of Electrical and Electronics Incorporated Engineers, of a new annual competition for what was then known as the Girl Technician Engineer of the Year. This was targeted at qualified female incorporated electrical engineers aged between 20 and 30. Peggy was on the adjudicating panel for the ensuing 20 years. For her support and work in this the Institution made Peggy an Honorary Fellow.

Peggy was President of the Women’s Engineering Society 1972-1973.

When Peggy died, she provided a legacy for Soroptimist International St Albans and District. From 2010 to 2013, in memory of Peggy, this legacy funded the “Peggy Hodges Prize” for the highest performing female student completing the second year of a full time MEng/BEng Engineering degree at the University of Hertfordshire.

Follow the links below to see all of the Club’s news items about the engineering award:

#WhoIsShe? Campaign – including Peggy Hodges OBE.   The centenary of the organisation seemed a fitting opportunity to recognise and celebrate the professional and personal commitments made by these outstanding members through the years. These #WhoIsShe? campaign members, both past and present, from Soroptimist International of

Peggy was showcased in July 2021 www,sigbi.org/soroptimistcentenary2021/showcases/