Each year SI Cannock and District hold a Summer Celebration with members, family and friends.
Until last year of course – when because of Covid-19, no-one was able to meet in such
circumstances. So this year was even more of a celebration when, in line with guidelines, 30
members and family were able to meet and enjoy each others’ company and a meal together.
And this at the splendid Tutbury Castle, where the sun shone to help things along even more.
SI Cannock &amp; District President Jackie Prince said how thrilled she was to welcome everyone to
the first formal occasion the club had been able to hold since February 2020 – 17 months ago!!
The conversation and the smiles didn’t stop: everyone was so excited to be able to go out and
to meet again.
And the afternoon was completed by a visit from the curator of Tutbury Castle, Lesley Smith,
who never fails to educate and entertain. This was no exception. She appeared as George
Eliot, the pen name used by Mary Ann Evans, born in 1819, author of Middlemarch, The Mill on
the Floss and other novels. Mary Ann Evans was a Midlander by birth and a woman ahead of
her time. The audience learned that she was highly intelligent, a freethinker – but unfortunately
not with the most attractive looks, in fact, many called her ugly. The most surprising thing
everyone learned about this Victorian woman was that her private life was scandalous, living
with a married man for 24 years and being shunned by her family and society as a result but
even so she was the most successful self-made woman in the Empire. When she and Henry
James Lewis fell in love and lived together she called herself Marianne Lewis. The story broke
that she was living with a married man with children – and her book sales trebled! In character
as George Eliot, Lesley Smith said “I am an ugly duckling; I rose to be a literary swan”.
Soroptimist Janis Lomas, an author herself, gave the vote of thanks to Lesley, telling her that
everyone had indeed enjoyed finding out more about the character she had just brought to life
for them. Many members are determined to read George Eliot’s novels again – with renewed
interest! 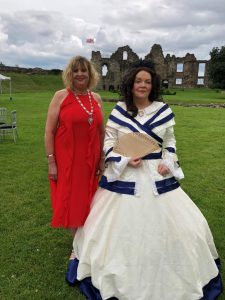 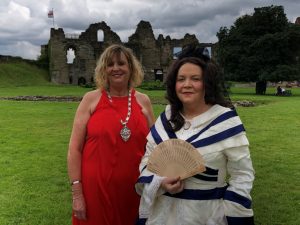