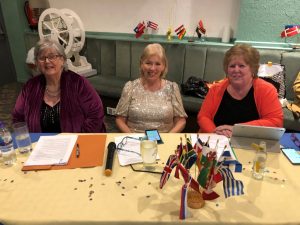 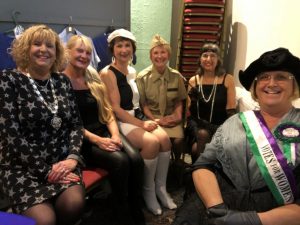 The first Soroptimist International Club was formed in California in 1921 – so Soroptimists worldwide have truly had something to celebrate during this last 12 months, their Centenary Year. Many clubs – in all 5 Federations – have taken part in joint projects and most have held a Celebration event of some sort during the month of October 2021. SI Cannock & District has been no exception!

On Friday 15th October over 100 club members, family and friends joined together to enjoy a trip down memory lane. The idea of President Jackie Prince, 20 club members put on a show which was thoroughly enjoyed by everyone – there were so many congratulations, this is obviously an event that will stay long in the memory.

Each of the decades from the 1920s to the 2020s was covered – each section beginning with a piece of music epitomising the decade and with two members showing of the fashion of the time. Amongst them was a Suffragette, flapper, nurse, a land army girl and someone ready to jive the night away; we were reminded of the pop art dress of the 60s, Abba and punks of the 70s, Power dressing of the 80s, shell suits of the 90s, onesies of the 2000s and the cold shoulder look and Goths of the 2010s.

A power point presentation accompanied by narration helped everyone remember the books, films, cars, food, inventions and medical advances of each decade; the comment heard mostly was “Was that really that long ago?” The development of Soroptimist International was included too: from one club in California to over 3000 clubs in all parts of the world – all of those clubs aiming to enable, educate and empower women.

Soroptimists Trish Smith, Pat Stanley and Wendy Summer did an amazing job making all of the costumes whilst members Janis Lomas, Trish Smith and Jackie Prince carried out the research and wrote the narration. President Elect Emma Hodges dealt with the technology.

Other members – many of them, as President Jackie said, pushing themselves out of their comfort zone – were the models for the evening.

In true Soroptimist style, an evening which had been lots of work but also lots of fun also helped others: the raffle held on the night raised over £230.00 for the Soroptimist International Emergency Fund whilst proceeds from the sale of tickets raised around £600.00 which will be shared between Staffordshire Women’s Aid and the Pathway Project for women suffering domestic abuse.

The evening ended very emotionally with the section for the 2020s involving all those who had taken part coming on stage in full PPE to the moving “You’ll Never walk Alone” by Captain Tom and Michael Ball. There may not have been many dry eyes in the room but there was plenty of care, kindness and appreciation for the difference we are able to make.