This year promises to be a little different for Cannock Soroptimists – as they have not just one President but the whole club working together sharing the many roles of President to show that they really are “All in this Together!”.  They do have one person officially named as President – and that is Trish Smith, who brought the club through Covid lockdowns so successfully.  She is the point of contact but club members are taking on organising speakers and special events, leading meetings, coordinating events with other clubs, organising agendas – along with the other tasks of being President of such a busy, vibrant club.

They are certainly building on last year under President Jackie, whose aim for every member of the club to be actively involved was realised meaning that everyone discovered new things they could do, so living up to her theme “It’s What you Do that Counts”.

The first event of the club year saw four members – Jackie Prince, Val Jones, Adrienne Hewitt and Olivia Lyons-Hughes – supporting Rotary and the Cannock & Stafford League of Friends “Sleep out to Kit out” held at Cannock College; other members were involved in providing and serving a meal before the 4 of them settled down for the night in their cardboard box beds.

At the first business meeting of the new year President Trish Smith presented Jackie and Val with their certificates and letters of thanks from Rotary and the League of Friends. The four who had slept out had raised hundreds of pounds in sponsorship but had all found the event rather disconcerting. Jackie said “For me, this wasn’t a pleasant night.  I kept thinking of all those who have no choice but to sleep out every single night, waking up each morning knowing they have to do it again and again, whilst we could all get up, go home and get into comfortable beds.  It also made me think of the awful situation Ukrainian refugees are in, having no home, not knowing what the day will bring”.

It certainly was an event that made everyone aware of the conditions some people have to endure; it also raised over £6,000 which will be placed in a fund which any organisation or charity can apply to for a grant to help the homeless or someone move from hostel style accommodation into a home of their own. A committee made up of the Cannock & Stafford Rotary clubs and trustees of the league of Friends will administer applications. 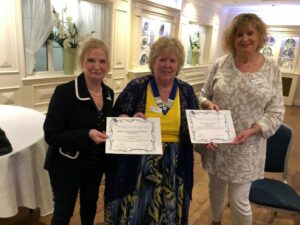