We have given talks:

Ali Ussery (Haven of Light) gave a talk at a Club Dinner to members from our club and other clubs in the region.

We have lobbied the Police & Crime Commissioner about the lack of funding for the Cheshire Anti-Slavery Network, and we are hopeful that meetings will recommence in 2020.

It is known that hotels can be used to provide a venue for sex slaves. We are checking the MDS Statements Re: Ethical Supply Chains on the websites of Chester Hotels.

Our work comes under the umbrella of UN Sustainable Development Goals:

16 – Peace and Justice. This also mentions the need to reduce all forms of violence, as well as to ending abuse, exploitation, trafficking and torture of children.

For further information about our work to raise awareness of the signs of Modern Day Slavery all around us, see here. 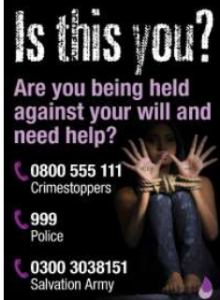