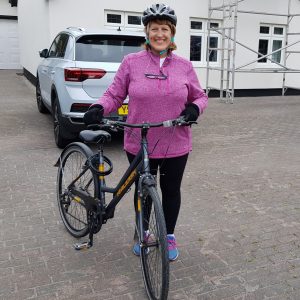 To celebrate the club’s 82nd anniversary, the Soroptimists undertook a variety of sporting (and other) activities. Everything was planned in compliance with the COVID-19 restrictions.

To spur on their efforts, they invited friends and families to pledge a donation to SWACA. The total so far raised is over £2,000 – and still rising.

So members hula-hooped, cycled, walked, lifted weights and exercised to music. There was Jill’s harp-athon and Jane’s bake-athon. Absence was no problem for Pam, in Spain, as she completed her “3-peaks challenge” – three hilly streets. 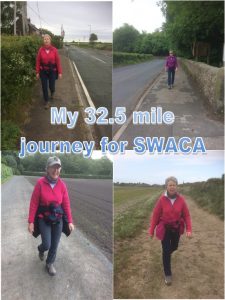 President Chris was so carried away with her hula-hooping that she kept going for more than her intended 26 minutes. Fundraising co-ordinator Chris managed a half marathon on her bike and Terry (Programme Action Officer) walked 32.5 miles over a week.

‘Friends’ joined in! Panda rode pillion on Ann’s bike and Bournville went with Jenny round-and-round the garden. It was fun for all who took part.

Neil Frackelton, Chief Executive of SWACA, said: “Crosby Soroptimists, one of SWACA’s long-standing supporters, have once again come together creatively and selflessly, to fundraise for SWACA.

“We are delighted with such a generous act. We are very appreciative of the interest and financial support at a time when there is significant evidence across the UK that domestic abuse affecting women and children is rising as a result of the COVID-19 crisis.

“Thank you to all the Crosby Soroptimist members for your amazing support for SWACA through the marathon, and over many years.”