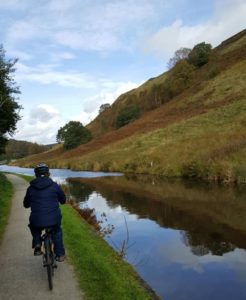 Well Ladies, as you probably know, I recently came up with the crazy fundraising idea of cycling from Crosby to Hebden Bridge, West Yorkshire. The idea came about because my son and his wife and son live there and I thought that it would be a great idea if we used the towpath of the Leeds / Liverpool and Rochdale Canals as a route to go and visit them. This was, of course, before COVID struck so the original plan of staying up there for the weekend had to be rewritten to a quick turn around and home again.

Nevertheless, we set off on Wednesday 7th to make the 80 miles trip over the next 3 days: our expected ETA being Friday 9th at 4pm when my son and his family would meet us on the bridge at Hebden.

I am very pleased to be able to tell you that we did it!!!!!

I hope that you have managed to see the many photographs that Tina and Jill have put onto our website and Facebook page to see the sights along the way. I have to say that it was a wonderful way of seeing the beautiful countryside that we so often take for granted. It was also a wonderful geography lesson as we came across places that I hadn’t even heard of,  let alone visited before.

I will now forever be a fan of Wigan as it was so clean and well cared for and with a beautiful array of birdlife while we cycled through the Flashes ( lakes) that surround the town. Worsley was also a revelation with its black and white timbered houses. Nothing could have warned us though for the subterranean parts of Manchester city centre around Canal Street. Who would have known that there was actually a canal underneath Canal Street!!!!! Aa there had been a lot of rain the previous week, there was a lot of water underneath Manchester. At one point the path was completely submerged as the canal had overflown and I could not see where the path actually was. I, therefore, decided to just go for it and began to pedal furiously. As I entered the water I actually created a bow wave and my feet kept going in the water as I pedalled. I just had to keep going as I couldn’t put my feet down and eventually emerged a little soggy from my adventure.

After that it was a relief to get above ground again and we carried on to Oldham where we stayed for the second night. Our final day was spent cycling up the hills around Rochdale and Todmorden which where beautiful and the autumn colours where spectacular. As we approached Hebden Bridge however, it started to rain so the final stretch was a bit soggy but it didn’t dampen our spirits. As we approached the bridge we could see our family waving and shouting and it was a wonderful way to end our adventure. My little grandson Sam didn’t know what to make of Nanna with her cycling helmet on though!