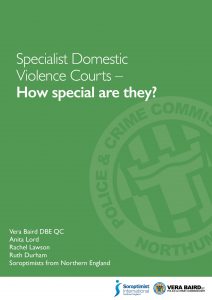 This report was the result of Dame Vera asking North of England Soroptimist International and her Court Observers Panel to focus their attention on the work of Specialist Domestic Violence Courts in order to identify any gaps in the system and make recommendations for improvement.

You can read their conclusions in the full report here.

After receiving the “Specialist Domestic Violence Courts – How Special are they?” report, Midland Chase Region invited Dame Vera to speak at its March 2019 Regional Meeting, and having heard about the in depth work which has been carried out, clubs throughout the Region unanimously agreed that this was an area on which we could work together.

SIGBI President Isobel Smith was in attendance and was keen to work on this project, so after contacting Midland Arden Region, they were happy to join us on this project. Between the two Regions, we covered three police forces: West Midlands, Staffordshire and West Mercia – a significant area geographically!

The report notes that there are significant gaps in the system and that, if funding were to be improved, Specialist Domestic Violence Courts (SDVCs) would work as was originally intended. The report also highlights a number of recommendations into how the SDVCs can be improved to deliver for victims.

We realised that this is an area in which we as Soroptimists could make a real difference to the way in which Domestic Abuse cases are handled in courts and subsequently throughout the country, in a number of areas e.g. training of court personnel, provision of Independent Domestic Violence Advisors (IDVAs), and perpetrator programmes.

Over the next few months, we held a number of meetings with police representatives, OPCCs and Soroptimists to discuss and plan how this project could be progressed. We are fortunate to have Jenny Pearson, a Chief Inspector with West Midlands Police, as a member in our region and she arranged the meeting with the appropriate senior police personnel to get the project started.

We agreed to use the same questionnaire for court observations as that used in Northumbria, and it was put online as this would enable us to complete the form electronically which in turn will facilitate analysis.

Three training sessions – run by Jenny Pearson – were arranged which were to be attended by all volunteers,  and it was arranged that two volunteers with counselling experience would provide welfare cover for volunteers if needed.

We planned for the project to go live for 9 weeks from early January until March 2020. During that time pairs of Soroptimists attended 7 Magistrates Courts where domestic abuse cases are heard. Online questionnaires were completed after each observation and input to the police database.

A few facts and figures:

The information gained will be analysed by West Midlands Police, circulated to other forces and recommendations made.

There will also be a debriefing event with police so that we can review the exercise and make recommendations.

Dame Vera attended the March 2020 Regional meeting to hear about the experiences of Soroptimists in Midlands Chase and Midland Arden regions, and to update us on progress in the north east. Northumbria has already seen some changes following the recommendations made in the original report and there is the possibility of achieving even more if we can show how courts throughout the country are working.

Our Domestic Abuse sub group will continue to focus on work in this area during presidential year 2020-21.