Soroptimists Celebrate a Bright Past and a Brilliant Future

The founding of Lichfield & District Club on 18th May 1998 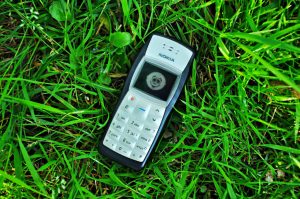 We’re quite a young club but even so, back in 1998 when we were founded mobile phones looked like this, your email client was very probably AOL, you used a dial-up modem (remember how those sounded?) and the world wide web was only 6 years old!

In the mid 1990s I was employed as a Principal Lecturer in Health Studies at a local university. I spent 50% of my time teaching and assessing in hospitals at all points between Dudley and Burton on Trent. This is only relevant in that it demonstrates the great number of women with whom I came into contact, in all professions allied to health and well being across different areas of society.

In the office next to mine was a lady who was to become a very good friend, Laurie Swift. I noted that in conversation she regularly referred to her membership of the Burton on Trent Soroptimists. I had a little knowledge of this organisation – gleaned more through curiosity than anything else. It appeared to be a rather “secret society”. Not only did one have to be formally invited to join – there was a pretty rigorous vetting process beforehand – held face to face with established members of the club that one wished to join.

It was quite usual for membership applications to be rejected on the grounds of someone “not being quite what we are looking for.” All this was further complicated by the ruling that a club could only have one member of each profession. It was like waiting for dead mens’ shoes! Neither I nor any of my friends or colleagues had ever been asked to join a club, nor had we applied to do so.

I confess to being somewhat incensed by the whole ethos of vetting and careful selection, but I was immensely interested in the work done by Soroptimist International. Surely the more members, the more help could be given?

The gauntlet had been thrown down! We would have our own club in Lichfield. There was one in Rugeley but no one from Lichfield had ever been asked to join. There was a fair number of professional ladies in the city whom I – rather arrogantly – supposed might find a little time to give to Soroptimism!

I could never have dreamed just how time consuming it would become! When I approached Laurie Swift she was full of enthusiasm about starting a new club and pledged her full support – which is how SI Burton on Trent became our mother club.

Laurie introduced me to Ann Dawson, a committed Soroptimist who later became Federation President. Ann and three of my colleagues met over a glass of wine in our garden to discuss the new club. Sadly, one of the three is dead and the other two have moved to pastures new. We had taken on a huge project but once other clubs in the region realised that we were serious they supported us to the hilt – we could not have done it without them.

I invited about twenty friends and colleagues to our first meeting in the conservatory at Curborough Farm. Our brief was to raise enough money to actually start a club, plan a programme and to plan a Charter Dinner six months hence for our inauguration.

I was firmly told that clubs cannot raise money for their own use! (most of the existing clubs had, over many years, accumulated quite healthy funds through legacies etc)… My response was – no fund raising, no new club! So we held about six events to give us a sound financial start.

Planning the Charter was extremely stressful. We were to invite the Mayor, Sheriff and other civic dignitaries;  along with the SI Federation President and other senior members from all over the country,  and also representatives from all the other clubs in the region.  It was to be a black tie event with partners invited. All told about 250 guests would attend and the only venue available at that time to accommodate such a number was Drayton Manor.

Despite all our concerns (and after I had lost endless nights’ sleep worrying!), we had a wonderful evening and our new Club was well and truly launched.

Of course many of our initial members came from from the health care sector. We were very imaginative with their job titles because of the “one only from each profession” rule. We had general nurses, paediatric nurses, elderly care nurses, infant teachers, secondary teachers, specialist teachers etc etc. Over the years the membership gradually became more generic as members moved and others joined. We now have members from many professions and businesses – and wonderfully we still  have several founder members active in Club.

There have been very funny moments and some sadnesses, but when I see the achievements and the wonderful work done by Lichfield and District Club I can hardly believe that it has evolved from that small gathering in the garden!

We have also had a fair representation at regional level. I and two other members have acted as Regional President and we have provided treasurers and secretaries. In addition, various members have chaired and led specialist groups. I am lucky to have made some wonderful friends here and across the globe and it is now a particular joy to see the friendship, love and supportive care that our club engenders.

I went to Cuba as a 50th treat from my husband John in June 1997, and became very aware of social differences and how people begged for clothes, lipstick, tee-shirts and shoes. If I had been aware of those circumstances I would have filled my case with things to give away to the hotel staff.

When I returned home, my good friend whom I had previously worked with at Tamworth and Lichfield College, Ingrid Callwood, said that her work boss, Angela Reynolds, had been hearing about a group in Burton, called Soroptimists, and there wasn’t one in Lichfield, so could Ingrid invite as many as she knew who would be interested to attend a meeting at Curborough, to hear all about it? I went along and was most interested as the benefits to women, service to needy groups, aims and giving back something to societies/the world of women was just the right thing for me to support at that moment.

Coming from a family of four daughters and being a granddaughter of a woman who insisted that her daughters all had careers, I too, had strong views that this “man’s world ” should be changed to the benefit of women!  I regularly attended meetings and was impressed with the aims of this world wide group. I was still working full time at college as Curriculum Hair and Beauty Section Leader. It was great to attend something of interest to me on Wednesdays, and watch the changes in Club which took place over the years.

I held various positions in the club over the years, my favourite being of Programme Action Lead, then sharing it with Chris Corless for two years; developing the Programme Action Reports with the Federation Programme Action Officer of that time, and being asked to submit ideas to improve the reporting and make it more user friendly.

I was asked by Federation to test a few reports and eventually the new system went online. I think that was about 8 years ago. When I was club Programme Action lead at first, I developed a folder so that I could understand it all myself!! I then produced A4 pictorial sheets for club, listing aims with photos, coupled with what actions we had taken each year, before the AGM, in my annual report. Club enjoyed the pictorial version they said, and we used to give these out at Awareness Meetings. None of these facts need to highlighted, as it’s about the club, not me, I was just proud to help develop the reports and having been asked to do so.

To conclude, the holiday in Cuba awakened my social heart in time to join Soroptimists! I had admired Angela’s enthusiasm at that introductory meeting at Curborough, and wanted to know more. From our first “official” meeting, she steered us along in those early days and invited Ann along from our mother group Burton on Trent, to advise us of what we could and could not do. We evolved very well in my opinion, gaining great respect from other Regional clubs and Federation! Members have added so much year on year, breathing new life and ideas into the Club…

We’ll be updating this page with a flavour of the last 21 years from time to time…so watch this space! In the meantime, why not join us?

A Bright Past – Soroptimists Celebrate 100 years is a key part of our centenary celebrations in 2021. Why not take a look?