I’m left-handed, what’s your super power? And who knew left-handed people had a special day once a year on 13th August? I certainly didn’t and I suspect I am not alone. Before you are tempted to move on here are a few facts that may interest you or which may be be useful in your next pub quiz. 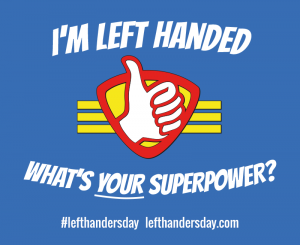 To be serious being left-handed is genetic, it runs in families. Throughout history not using your right hand was considered to be wrong, something that couldn’t be explained and singled you out as different from everyone else. You were considered to have been “touched by the devil” and in medieval times were perceived as witches and put to death because of it. The Latin word “sinister” simply means left (as opposed to right) but even today the negative connotation remains.

So, because of this thinking it was considered necessary to make left-handed people retrain as right-handed. The BMJ wrote:

“The methods used to obtain this result were often tortuous, including tying a resistant child’s left hand to immobilise it. Typical of the reasoning to justify such practices is a 1924 letter to the British Medical Journal endorsing “retraining” of left-handers to write with their right hands, because otherwise the left-handed child would risk “retardation in mental development; in some cases…actual feeble-mindedness”.

We are more sympathetic to lefties today, but I am constantly reminded by everyone else that I am are different and a bit odd when using my left hand. I have lost count of the number of people who, when they see me write, say “I never knew you were left handed” to which I usually reply “I didn’t know I had to tell you”!

We left handers mostly adapt to a right-handed world but some things, such as these examples, are just too awkward for us:

The view that left-handers are clumsy and awkward is not down to their natural abilities, but to being forced to use right-handed tools and machinery which are completely back-to-front for them.

In lectures or conferences, the chairs with the table attached are totally designed for right handers and are impossible for me to use. At the dining table we would like our glass on the left not on the right, and if seated next to a right-handed person, well it’s synchronised eating, so we don’t clash!

And don’t get me started on spiral notebooks or can openers!

So, the purpose of International Left Handers Day (there’s a club too!) is to raise awareness and challenge right handers not to use their dominant hand for a day which seems a bit tough so just try using your left hand once or twice for a task and get an idea of how lefties adapt to a right-handed world.

Oh, and just to put the record straight being left-handed doesn’t make you feeble minded as once thought. Here are a few examples of famous left-handers who disprove that theory: 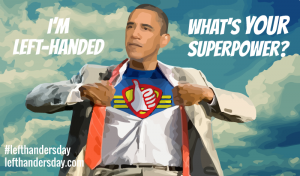 Many actors are left-handed…now I’ve told you, spot them on TV and on film…Plus Aristotle, Leonardo da Vinci, Napoleon, Marie Curie, Winston Churchill, Bill Gates, Oprah Winfrey, Barack Obama  and the Queen Mother, a trait she has passed on to her great grandson, Prince William, our future King.