The Role of the Victims’ Commissioner 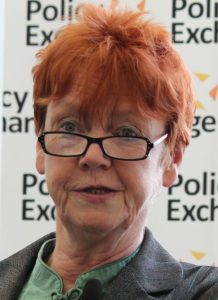 We were delighted to welcome Dame Vera Baird, Victims’ Commissioner as our speaker at the London Anglia Region Meeting end November.  She is a sister Soroptimist, was Solicitor General during Tony Blair’s Government in the 1990s and, until recently, was the Police and Crime Commissioner for Northumbria.

Dame Vera told us that she had first become aware of Soroptimist International when several years ago she had been asked to open an event organised by SI Ipswich. That event celebrated the achievements of women victims of domestic abuse – recalling the powerful and well organised exhibition and advising that this was why, when later the opportunity arose, she was delighted to become a Soroptimist and was now a member of SI Greater London.

The talk, which was supported by a PowerPoint presentation, was very interesting, informative, and extremely relevant.  It gave us an insight into her role, resources (minimal), and priorities in making change.  Dame Vera explained that the key need was to recognise the role of victims and witnesses and to try to do the best that can be done for them – by encouraging good practice in their treatment.   Her research has identified that it is essential that victims of all events are included in the process, kept up to date, treated with respect and, whether the crime ends up in court or not, understand the issues. Few crimes are victimless: be they burglaries, personal physical attacks or events of serious intentional or accidental deaths, the resulting trauma can significantly and negatively affect the victim lives. Only by treating victims inclusively can they feel their life can move on. Those who have suffered from domestic abuse and their children are also victims as well as being survivors: usually traumatised by their experiences of going to court. It is time for change.

As well as talking to Victims her learning comes from:

so that she can develop a position on policy issues and ensure good victims’ services.  There is a new Victims’ code but compliance is an issue.  Many victims are not even told about it.  Should it be law?  Can the role of the Victims’ Commissioner become more powerful, have real teeth?

COVID has resulted in an increase in DA, SVAAS, ASB, hate crime, cyber fraud.  With courts shutdown the challenge is to help victims recover due to these delays; charities & support services + remote working have seen sharp increases in demand.

The talk and Q&A session which followed helped further raise our awareness of the issues and understand the many challenges that had yet to be addressed.  Thank you Dame Vera.

Region Home
Regional and Club Events Calendar
Showcasing 100 Soroptimists for our 100 Years Celebration
Pelandaba Orphans
UN Day of Elimination of Violence Against Women – 25th November -16 Days of Activism
Programme Action during Lockdown
Online Regional Meeting during Lockdown
What is President Mell Doing
Why YOU should be a Soroptimist!
The Role of the Victims’ Commissioner
Home Page – About Soroptimist London Anglia Region
2021 – Our Centennial Year