The November Regional Meeting was held in The Royal George Hotel in Perth. This was President Jean Campbell’s first meeting since taking office as President of Scotland North. 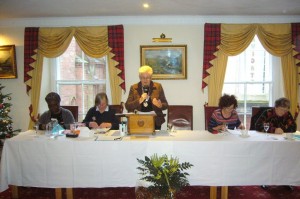 There was a short change of insignia at the start of the meeting. 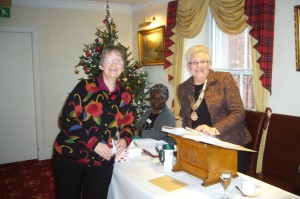 The Regional Council Meeting proceeded smoothly followed by a productive breakout session when delegates discussed ‘Why they were a Soroptimist?’. Members found this a very helpful time of discussion.

After a satisfying lunch the delegates settled down to listen to two excellent speakers:

Roddy Ross, a former police officer, gave a talk on ‘Violence Against Women’. He highlighted the changes in attitudes towards domestic violence taken by the police during his career; violence against women is now fully investigated and prosecuted.

Rev Barbara Ann Sweetin, gave a humorous, yet serious talk, about the social outreach going on in her parish church in Forfar. 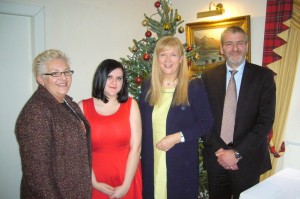 The Free to Live Trust:

IPP Pam Cairns – Co-Founder of The Free to Live Trust -received a cheque for £877 from President Jean for the Trust’s, Seema’s Project. This money was from  Regional raffles and donations from Scotland North members. Pam thanked the delegates for their support and promised to update them in the months ahead.