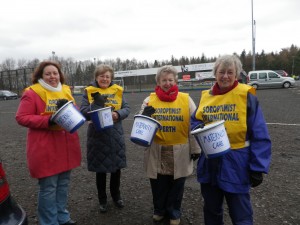 “Some intrepid members of the Perth Soroptimist Club celebrated International Women’s Day by holding a ‘chuck it in the bucket’ collection in the cold outside McDiarmid Park, recently.  Soroptimists have developed a partnership with Maternal & ChildHealth Advocacy International, an organisation which seeks to ensure healthy mothers and babies in different parts of the world, including the Gambia.  If you are interested in this project and want to find out more, call Jean 07947 604 597 as we are collecting old, used & broken jewellery of all types, old coins & notes and old mobile phones, no matter the condition.  Much needed funds can be raised as we recycle which is a win/win situation!”

“SI Perth held an Open meeting to raise the profile of Soroptimism, enthuse the current membership and recruit new members.  The local Regional Ambassador for the 3E Project: Healthcare, Lexi Smart, provided a full update of the SIGBI partnership with MCAI and the Club proudly displayed its new banner.  At least two new members will be recruited during April – success!” 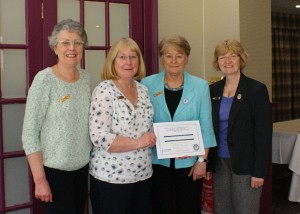 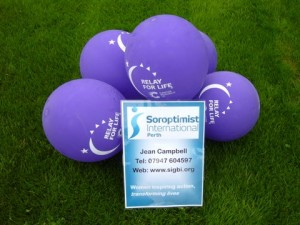 “A member of SI Perth attended the July 2013 Blairgowrie Relay for Life, a 24-hour event, which supports Cancer Research UK and which raised at least £26,000 … but more donations are expected.  Jean C raised SI Perth’s profile by speaking to more than 40 women (and two married policemen!) handing out flyers & sharing information about the work of Soroptimists world-wide.” 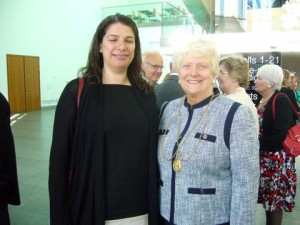 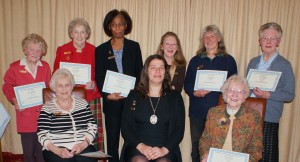 ” 268 Glorious years of service to Soroptimism.
SI Perth President Catherine Carruthers (centre front) was delighted to present Soroptimist Long Service certificates to (back row L to R) Jaye, Mary, Pat, Marjorie, Sarah & Diana,  and (front row L to R) celebrating 39 years Nancy & Jean Mac who celebrates 54 wonderful years of service!  What an inspirational example to those members who aspire to achieving what these members have achieved!” 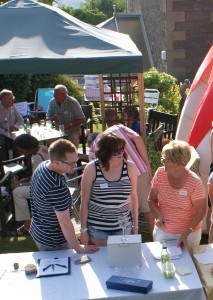 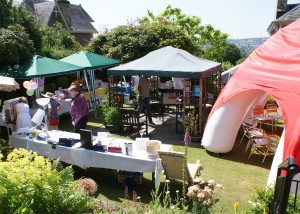 The Soroptimist Club in Perth held a fundraising BBQ/Bring & Buy Sale on a gloriously sunny 20th July, SIGBI’s Day of Action for the Birthing In the Gambia (BIG) Project. Many friends and family supported the Soroptimists resulting in over £1,700 being raised for the BIG project and over £1000 for SI Perth’s South African (Enkhutazwen) award-winning Food Garden Project.  Great fun was had by all, with money raised for great projects, which make a big difference for many! In addition, we recycled jewellery for the BIG project and spectacles for Vision Aid.  If you have any broken jewellery or old specs do give Jean a call (07947 604 597). 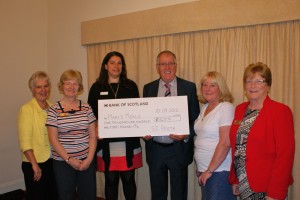 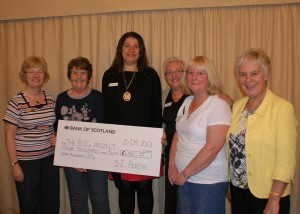 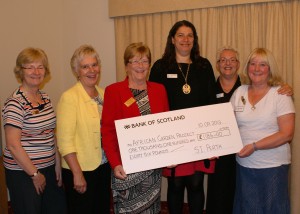 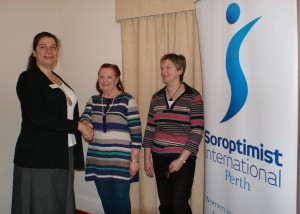 “President Catherine was delighted to welcome new member Alison Harrison who transferred
from SI Darlington & District recently – seen here with Sybil
Galbraith, who introduced her to the members on 11th March 2014. 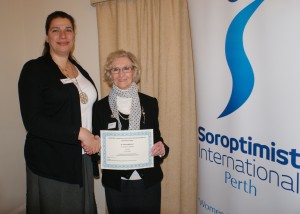 In addition, President Catherine awarded Terri Reilly
a somewhat delayed 30 years long-service certificate, on the same
night.  Terri had transferred from SI Glasgow South before the Club
closed. She entertained the Club talking of her travels to SIGBI
Conferences & SI Conventions”

Starter Packs Perth is an organisation staffed
entirely by volunteers which helps individuals and families on low incomes who
have been given the tenancy of a house or flat but who don’t have access to
basic household goods.” 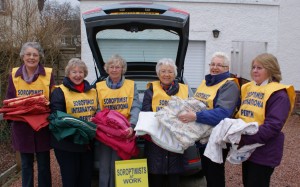 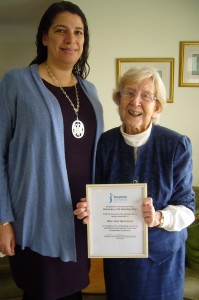