THEY may confab over a warm cuppa every now and again but let’s get one thing straight, the Swindon Soroptimists are no ladies who lunch. 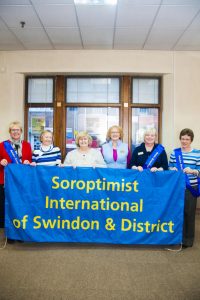 Far from another social club complete with tea cakes, jumble sales and gossip sprees, the band of all-female volunteers has spent the best part of the last and new century (quietly but doggedly) pounding the streets championing women’s rights, education at home and abroad, fighting violence against the most vulnerable and standing up for a fairer society.

Fresh from celebrating its 55th anniversary in Swindon, the humble sisterhood shows no sign of letting up.

“Our purpose is to empower and improve the lives of women and children throughout the world and our local community and that’s what we will keep doing.

“But not many people know what we do exactly and I imagine some don’t understand the word ‘Soroptimist’. But we are not women who lunch.”

While not technically a social club, there is no denying the networking and camaraderie aspects are important. As well as a charitable group serving the community, the first Soroptimist club – founded in California by Violet Richardson Ward in 1921 – set out to bring together a small yet fast growing section of professional women. This was compounded in the club’s early constitution: “To foster the spirit of service as the basis of all worthy enterprises and to increase the efficiency by its members in the pursuit of their occupations by broadening their interest in the social, business, and civic affairs of the community through an association of women representing different occupations.”

The name Soroptimist was coined from the Latin ‘soror’ meaning ‘sister’, and ‘optima’ meaning ‘best’. Soroptimist International groups sprouted across America and soon clubs formed in Europe and the South West Pacific. The organisation now counts 3,000 branches and 80,000 members in 132 countries and territories working at a local, national and international level to educate, empower and enable opportunities for women and girls.

Soroptimist International Swindon & District group was founded 55 years ago by 26 members, including teachers and solicitors.

“It was very much for women at the top of their professions to serve their communities and have their own lives,” explains past president Janice Bardwell.

Programme action officer Lydia Cardew agrees: “They were keen to give something back to women in their town and around the world who were not as fortunate and privileged as them.”

Campaigning has been a slog at times, particularly protracted attempts to lobby Government and amend laws, and members have had to wait years sometimes for their labour to bear fruit. Thankfully, they were and still are all in it for the long haul.

Over the years members have raised upwards of £100,000 although, they insist, they are not a fundraising group like Rotary for example. They have been front and centre at International Women’s Day every March. Since their inception they have made repeated stands against violence towards women. They have lobbied Government to change the law on pornography, on equal pay for women and separate assessment and taxation of married women’s earnings. They have supported the local Women’s Refuge and donated gift boxes at Christmas to the ISIS Women’s Centre, and cleaned hearing aids to be sent to Africa.

As well as campaigning for women they have also backed or spearheaded their own community support and beautification projects. They have taken action in Swindon on littering and recycling, donated to the food bank and the Big Breakfast Club for the homeless. They have also donated boxes of books to local schools on World Literacy Day.

“There is a variety of ways we can help,” explains Janice, 59, who joined the Swindon club in 1997. “It might be through an awareness campaign, but we’ve also raised money for ovarian cancer and distributed 11,000 bookmarks to schools, libraries and cafes with advice on healthy relationships. It’s about being proactive.”

While the club initially insisted on members being professionals or businesswomen, it is now no longer a prerequisite. It is open to women of all ages and backgrounds but the message has been slow to get out and with dwindling numbers – the groups counts just 15 members – the Soroptimists are keen to attract new recruits.

They have already taken steps in that direction, getting the word out on social media, but as part of their 55th anniversary celebration they are now embarking on a full-blown recruitment drive.

“I must admit it’s hard to keep going with just 15 members; the more people we have the more we can do,” says president Valerie Nuttal, who works as senior legacy manager at The National Trust “We want people to know it’s for women of all ages who want to make a difference and have fun while doing it. It’s about strength in numbers.”