Wiltshire Police and Crime commissioner, Angus Macpherson recently sent personal letters of thanks to member of Swindon Soroptimist Club, after the completion of a 3 month project observing  Domestic Abuse cases in Swindon and Chippenham courts.

In the letter Angus stated “thanks for your work on the DA Court Observation project. I very much look forward to reading the final report and working with my colleague Vera Baird…to improve the experience of those suffering from domestic Abuse”.

The project followed one instigated by Dame Vera Baird QC in Northumbria, who concerned at treatment of victims in rape trials, ran a similar period of court observations of Domestic Abuse cases and was keen to get another area in England to do the same so that results could be compared.

As they were already known to him for their work on violence against women, Swindon Soroptimists were approached by Frank Mullane, CEO of AAFDA (Advocacy After Fatal Domestic Abuse) who worked with Dame Vera, to ask if they would help on this task.  The Soroptimists were of course very keen to help and liaised closely with Carolyn Deverall (Service Improvement Officer in the PCC’s office) to set up the project.

Aided by members of the Cheltenham and Cirencester Soroptimists clubs to give enough numbers for a rota they were first given 2 days training on domestic abuse facts and figures and the court process by Olwen Kelly of Swindon Women’s Aid and Rachel Beale from the Public Protection Unit.

Ten Soroptimists members then attended Swindon and Chippenham Courts every week for 3 months to fill out a PCC provided questionnaire on all Domestic Abuse cases. This analysed the details of the case, the type of abuse, whether the victim had been consulted if there were variations, if a Personal Statement was taken and how the needs of the victim were considered.

As Carolyn Deverall commented after feedback from the first visit “Some interesting observations already….. they are all great things for us to know about as this is the whole point of the project.  Not just to see the impact on the victims and sentencing but also the structure of the SDVCs and the knowledge of the Judges and Clerks etc.  It just goes to show how important this project will be”.

By the end of the 3 months there had been 18 visits to hearings and trials at Swindon and Chippenham Courts and as a result 115 reports were filled out. These have been passed to the office of the Wiltshire PCC and will be closely analysed. This is still in progress but the results will be shared with Northumbria PCC and also passed to the CPS and the Courts in order to improve victim and witness support and treatment in the courts. 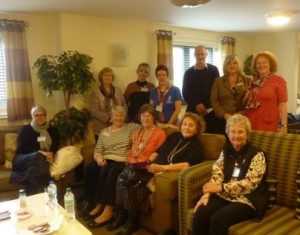