#WhoIsShe? – Showcasing Soroptimists for the Centenary

Thelma de Leeuw has been an outstanding Soroptimist throughout 55 years’ service. She has been totally focused on improving the lives of women and girls throughout the world. Her dedication and commitment are unswerving, being recognised in 2011 when she was made an Honorary Member of SIGBI.

Aged 11 in boarding school, her interest was sparked because the Soroptimist Headmistress involved girls in Club events. From 1951 to 1954 she attended the Royal Academy of Music, London, beginning her teaching career in schools in 1954. In 1966 she became Lecturer in Music and Education at Bingley College.

Whilst there she was introduced to SI Bingley in 1966 by her Headmistress who said, “This girl could be useful!” In 1973 Thelma changed direction to become Admissions Officer and Deputy Dean of Students at Bingley College, progressing to Student Adviser Ilkley College, and ultimately became Head of Central Student Services at Bradford College until August 1997.

Her Soroptimist life began March 1966 and her international involvement followed while attending the SI Convention in Rome as SI Bingley Club President 1971-1972. She considers the best job in Soroptimism is SI Yorkshire Secretary, a post she held from 1970–1974. She was Regional Secretary for the Sheffield International Convention 1975. As SI Yorkshire President (1976-1977) she attended the SI Europe Congress in Sweden.

In 1977 Thelma’s first involvement at Federation level was as a member of SIGBI’s Executive Committee, developing the new International Programme work and attending the SI Convention in Hawaii as Co-ordinator for Economic and Social Development (1979-1981). As SIGBI President (1982-1983) she chartered the first Club in Bangladesh, a link which she retains today.

Thelma became involved at International level as SI Programme Liaison (Director) from 1983-1987, attending the 1985 World Conference for Women in Kenya. Her board level experience led to her becoming Soroptimist International President 1989-1991. Thereafter “in retirement” in 1993 she represented SI as Co-ordinator on the Board of Project Five-O (vocational training for women in developing countries).

Upon retirement she continued her love of music and has worked in volunteer capacities using skills honed during her career and Soroptimist service including Voluntary Service Overseas, for whom she worked in selection and placement for many years, alongside always being an active club member at Bingley.

Her Soroptimist service required considerable world travel, with regular attendance at major United Nations Centres. She is totally committed to supporting the UN and served as a Board Member for United Nations Association UK. After meetings at the UN in Geneva on ‘The Rights of the Child’, she was challenged to commit Soroptimism to concentrate on work for women and girls. Others brought that work to fruition and Thelma remains convinced it is the fundamental challenge for international women activists today.

She is honoured she was “mentioned” to SI Bingley by her headmistress 55 years ago and is grateful for all that this generous gift has brought into her life, as are Bingley members for being inspired by her.

Transcript – recording of interview – Thelma de Leeuw with Jane Glendinning and Chris Clark, in celebration of the first centenary of Soroptimist International, October 2020

1  JG  Good morning Thelma. On behalf of the Yorkshire Region may I congratulate you on being selected as one of the 100 women to be showcased as pioneers of Soroptimism during our centenary year?

How did you feel when you knew you had been selected as one of the 100 women to showcase inspirational Soroptimists?

TdeL   If it’s possible to feel proud and humble at the same time then that was me – and very conscious, and appreciative, that this was a Club nomination.

2  CC What is your most cherished achievement as a Soroptimist?

I think it’s more usual these days to think of legacy rather than achievement. Achievement sounds ‘finished’ – leaders perhaps are more conscious of ‘work in progress’.

I could talk about the 1989 and 1990 December 10th International President’s Appeals, which highlighted the role of volunteers in Bangladesh and Lesotho, moving the work there from charity to the development of empowerment opportunities for women.

I could talk about “the men”!  Back in the 1980s the Federation of the Americas was facing the development of legislation in the United States which could require Clubs there to admit men to Soroptimist membership. That could have meant possible conflict with governments elsewhere, a brake on extension and serious discord at international level . There followed some of the most tense Board meetings I have ever chaired in any sphere of my life. But….we found a way to constitutional reform and “the problem” became an opportunity.

If you know Shirley Mason, from Skipton, she tells this story rather better than I do! Shirley acted as Board steward, one of whose tasks was to field the flow of paper in all directions while discussion was going on. Apparently, I developed the habit of tossing over my shoulder the signed record when anything was finally accepted, or rejected. On one occasion I heard a loud whisper from Shirley – “no no no no…” – I had picked up my coffee cup……

But….some of the most rewarding moments in my 50+ years of membership have been at the occasional realisation that something I’ve said – a challenge, a supportive agreement, a clarification, a statement of belief, has gone home, made sense, helped to develop a response which others can build upon.

I am reminded of an occasion in another Region, where I was guest speaker at a Club Dinner, a few years after being Federation President but before I became International President. Greeting a line of Club Presidents, I was confronted by one who said very firmly to me, practically waving her chain aloft – “This is all your fault”. I think it was intended as a compliment! I explored her history, and sure enough there had been some workshops which had sparked off her interest in Programme Development and contributed to her Club’s confidence in her nomination.

3  JG How has being a Soroptimist impacted on you?

TdeL   I became a Soroptimist – was invited to become a member, when I joined the staff of Bingley College of Education. By profession I was a practising musician, and as such the people with whom I spent my time played and sang, conducted, led, accompanied. …..Soroptimism changed all that! I found myself working in an urban community alongside a printer, a milliner, an ophthalmic surgeon, a funeral director, a hospital matron,.  focussing at least in part on concerns of the United Nations and the development of opportunities for women in other parts of the world. I became an enchanted traveller, throughout the United Kingdom but also in Scandinavia, Rome, Toronto……I also found myself in places I would not have chosen to visit, physically uncomfortable as I am in places of heat and humidity…..Madagascar, the Philippines, North West Australia, Japan in mid-summer….and I started to become aware that there were, and still are, many Soroptimists who live in societies where they will only hear what their governments say if non-governmental organisations tell them .

4 CC How has membership of Soroptimism changed, either positively or negatively, in your experience?

TdeL ….positive – we have, collectively, a stronger focus on programme – we always did it, but not quite so deliberately.

The balance between home and away, which some of you have heard me bat on about for years – the offering to our members the choice of either / or – or both, so that the international platform and the community commitment are both a reality – this is more evident I believe.

Negative…..I think we are sometimes not very brave. I remember with shock / horror still, the confident statement of one of my International predecessors: “ Drugs? – that’s too difficult for Soroptimists ! “ – and the cool quiet response from a wise Federation President:

5  JG What do you think are the challenges and opportunities Covid 19 brings to the future of Soroptimism?

TdeL ….most immediately we have had the challenge to maintain a meaningful Club life, with less or no meetings. We are in the process of learning to manage social media, not just do it, and so many members have listened and responded to this need  – and are demonstrating so this very day, alongside taking every opportunity to focus on assistance in the community such as support of key workers. If Clubs are truly representative of their communities they will have something to offer to their communities – we have people skills, we are people who are experienced at navigating unexpected change. There has not yet been much opportunity to affect policy – yet – but we should keep a note for future review of what has happened locally, including opportunities missed.

6…CC…. If you were to give one piece of advice to current and future members of Soroptimism what would it be?

TdeL – just one? Not so much advice perhaps as a challenge: Take A Risk. I don’t necessarily mean something dangerous but tackle the difficult – the less glamorous even; take a risk on an idea, a person, a partnership. Make “International” a reality in your Soroptimist life. Remember that your Club is named Soroptimist International of Wherever; there was a time when Clubs were named as Soroptimist Club of Wherever. Ask yourself at the end of a day “What have I done today to make International a Soroptimist reality?”

CC  …Members in the Bingley club, the Yorkshire Region, the Federation and even across the world are so proud of your outstanding achievements in your many years of Soroptimist service.  Thank you for your continued support in helping to improve the lives of women and girls, which is after all the Vision and Mission of Soroptimism.

So, thank you for answering these questions and, once again, congratulations of your selection as one of the hundred Soroptimists being celebrated during this centenary year. 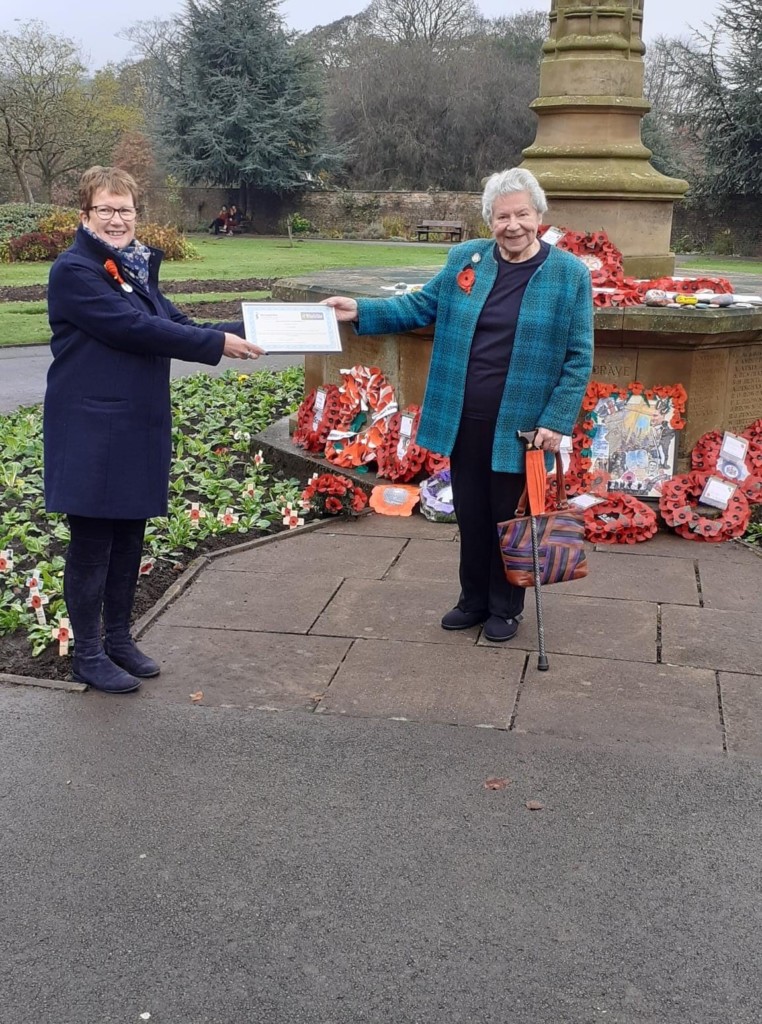 This lovely photo below is of Jane Glendinning, Vice President of SI Yorkshire presenting Thelma with her #Whoisshe? certificate.