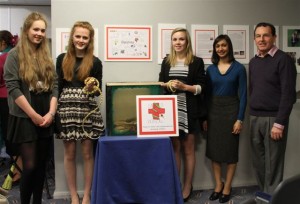 The winning team from Bournemouth School For Girls.Their idea was for a snake farm to enable the production of venom with medical potential in developing countries

With only one in five girls opting for the whole range of science subjects, SI Bournemouth issued a challenge, as part of the celebrations of the club’s 75th Anniversary this year, to budding women scientists which could help people living in the poorest parts of the world.

The STEM based challenge (Science, Technology, Engineering, Mathematics), issued in the autumn of 2012 to teams of girls in Years 9 and 10 at local schools, was to design, build and cost a project to help people in the poorest parts of our world. It had to be sustainable, fit for purpose and cost effective in a world where 884 million people lack access to clean water, nearly three and a half million people die each year from water, sanitation and hygiene related causes and every 20 seconds a child dies from a water related illness. An estimated 925 million people are hungry while the world produces enough food to feed everyone.

Of the projects submitted by four teams three focused on clean water and the fourth on capturing snake venom for medical purposes.

The winners of the “Celebrating Science Challenge” were: 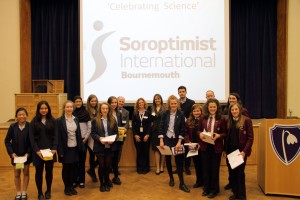 The girls spoke of how much they had enjoyed the challenge and of how much they had learned about the problems of the developing world and possible ways of relieving them as well as learning a whole range of new skills in developing their projects. One girl commented: “this was the most interesting and exciting project I have ever been involved in”. For three of the girls the challenge has resulted in their choosing the triple science option (chemistry, physics and biology), having had no thought of doing so before.

The judges were “truly inspired by the enthusiasm shown for the project by the girls in all four teams, by the quality of the ideas and the way that the girls worked together, developing and presenting their ideas.”

SIB President–Elect Kirsteen Harding said: “We were delighted at girls’ enthusiasm and the standard of their projects. We are attempting to address the lack of women in all fields of the sciences by encouraging schoolgirls in years 9 and 10 to think NOW, before they make their GCSE choices.”

The winning teams later met Roma Agrawal, Young Structural Engineer of The Year at out 75th lunch which was held at the B.I.C on Saturday 18th May. She spoke of her decision to follow a scientific career and how it lead to her working on The Shard Building Project in London. Over 100 friends and supporters, including the Mayor of Bournemouth, Cllr. Phil Stanley-Watts, Margaret Olroyd, Federation President Elect, and  Rita Renton, President of our Southern Region joined us to celebrate and we would like to thank them for their company and supporting our endeavours.

Some More Photos From The Lunch 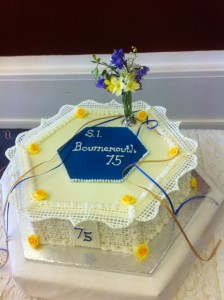 Tref’s Cake made specially for our 75th Celebrations 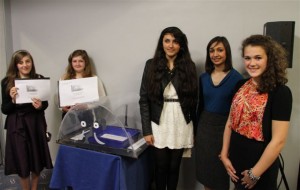 The Waterphant  Device uses evaporation to produce clean water at a low cost, a vital piece of equipment in developing countries. Invented by Arnewood School