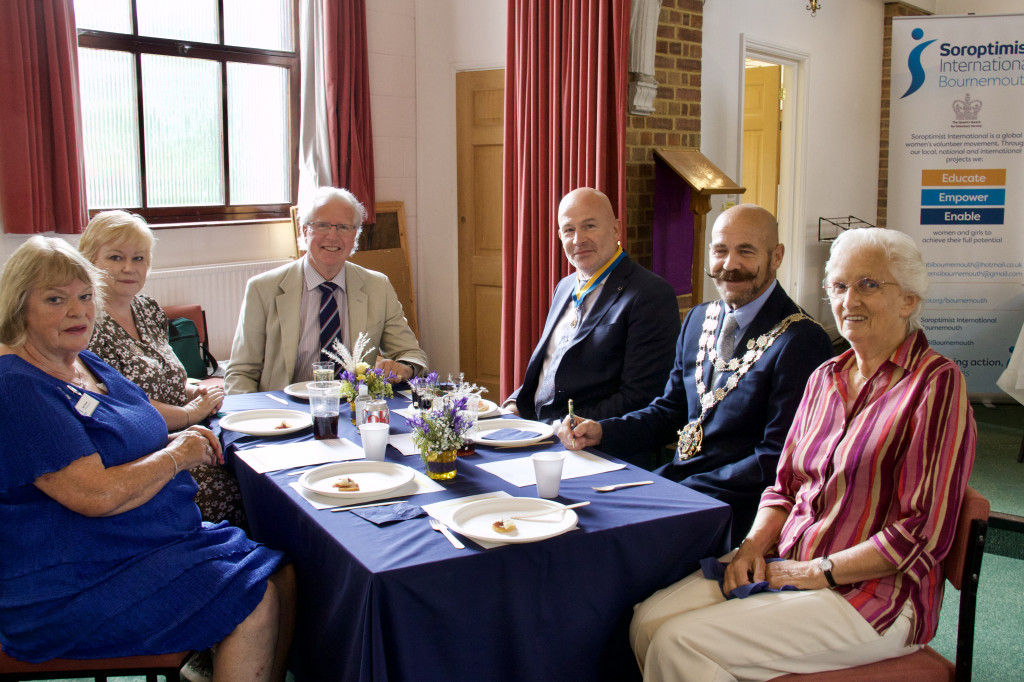 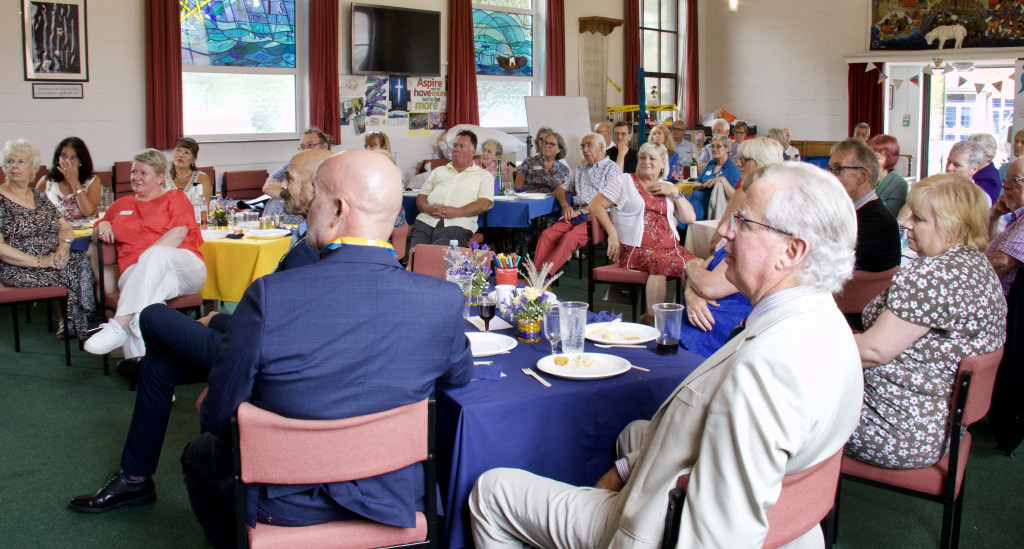 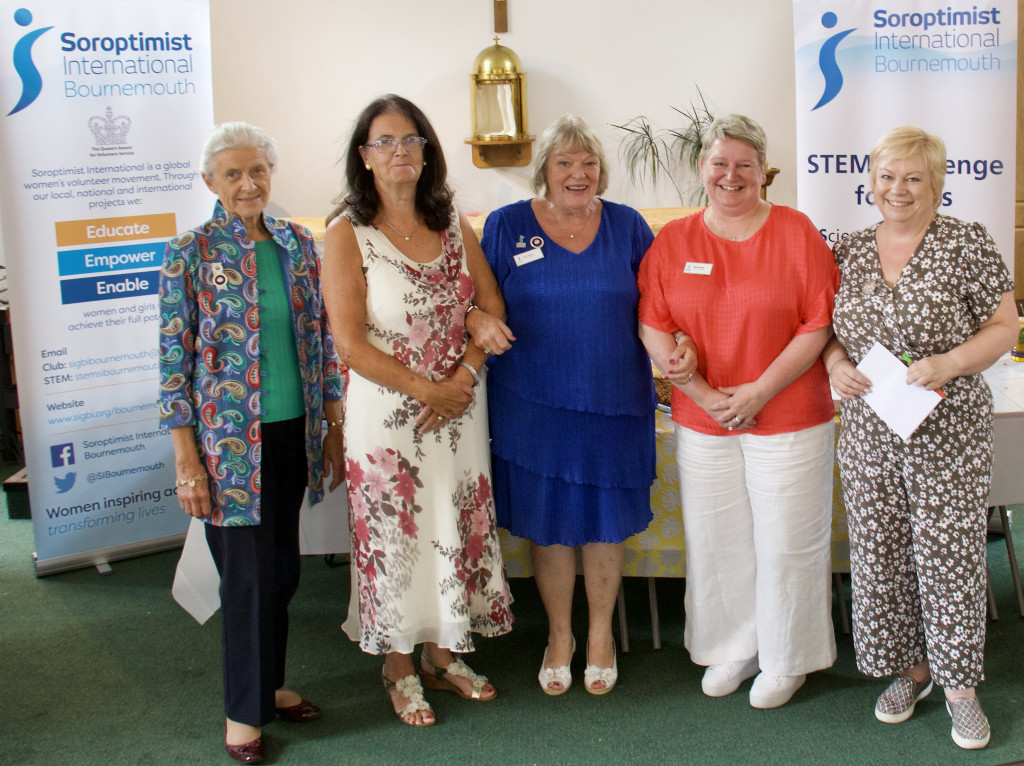 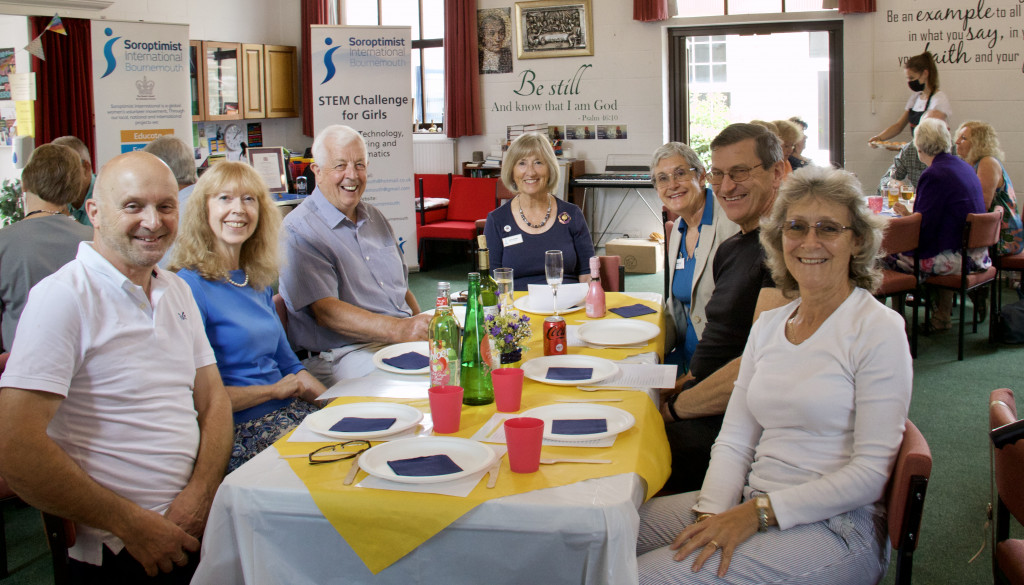 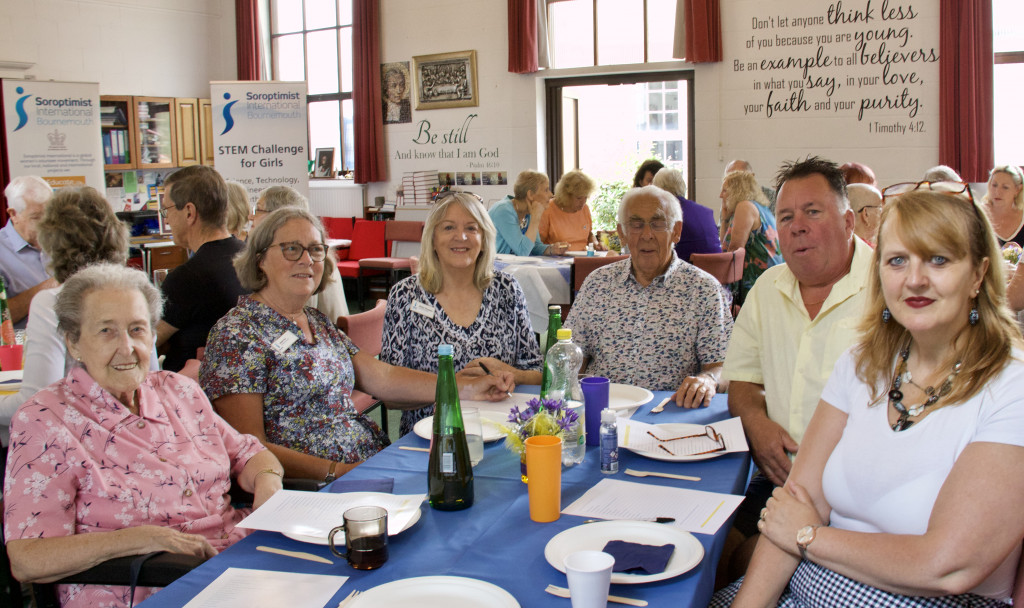 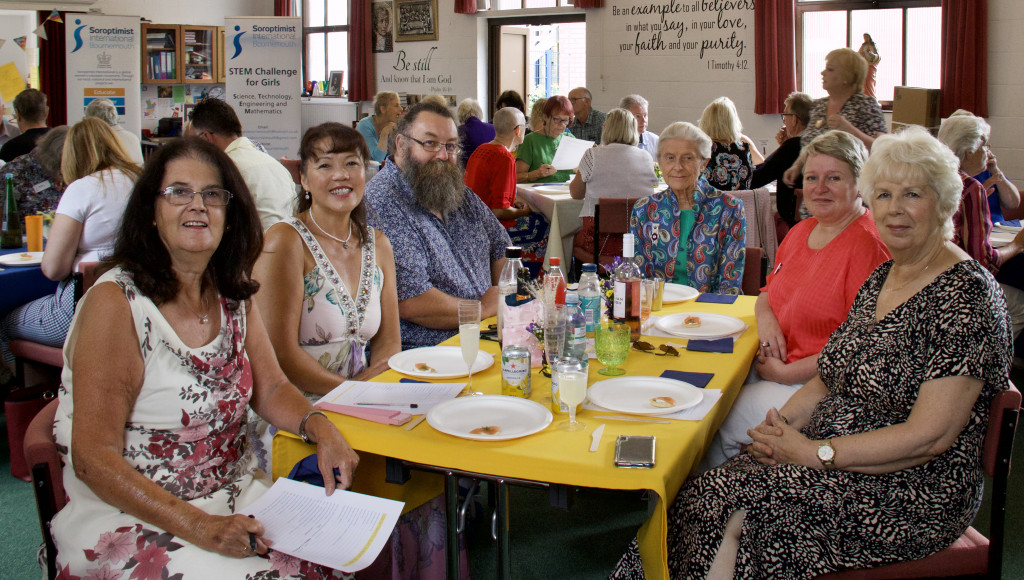 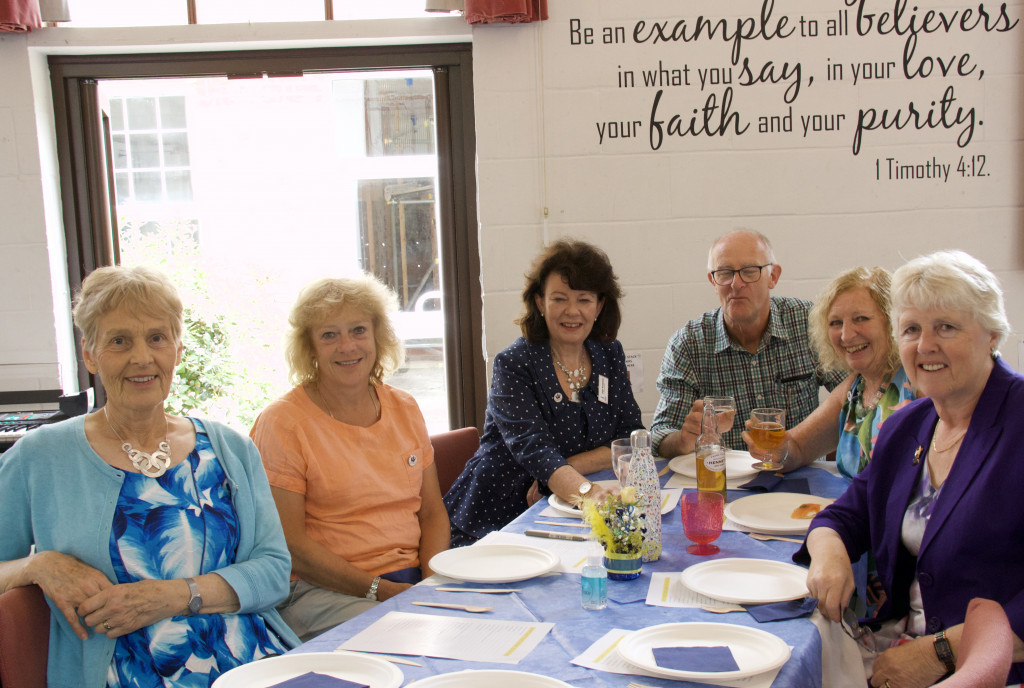 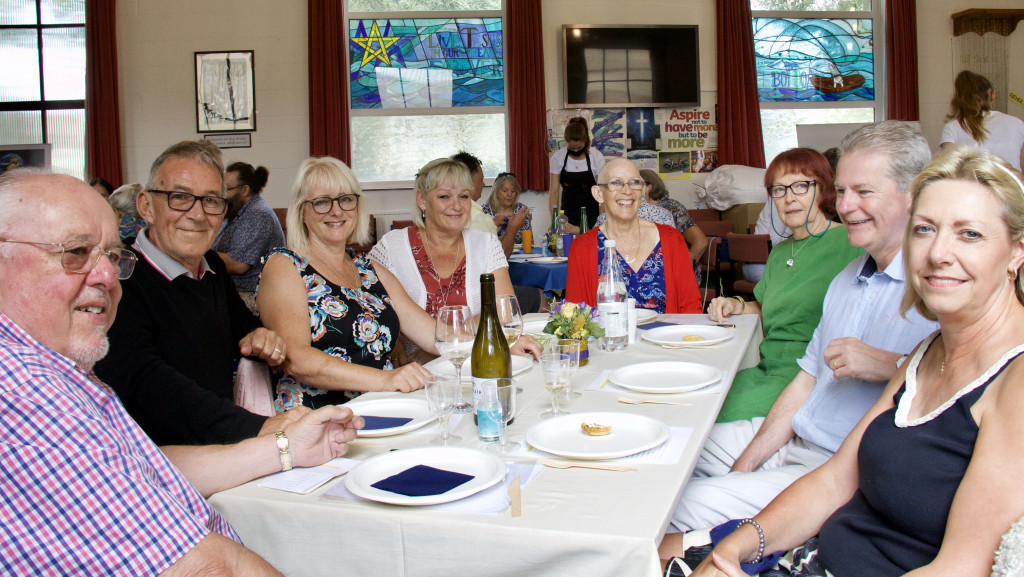 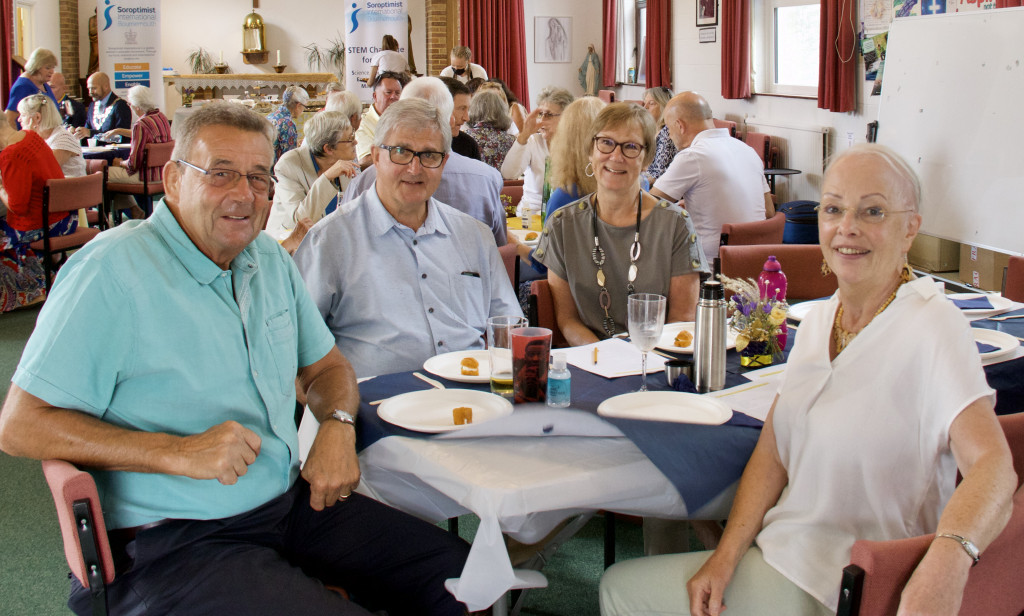 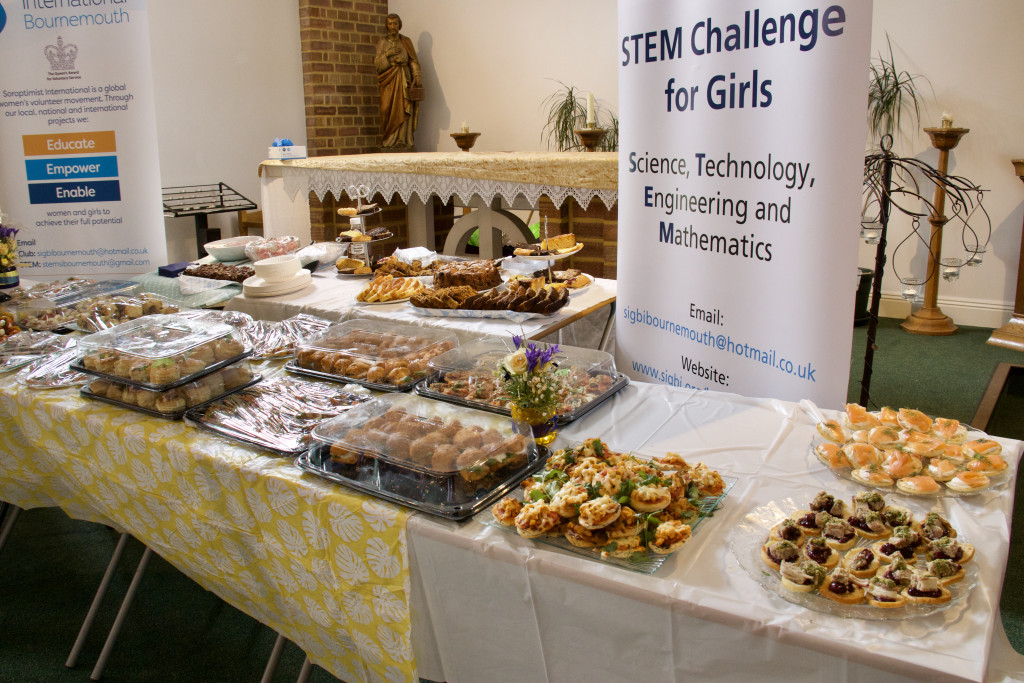 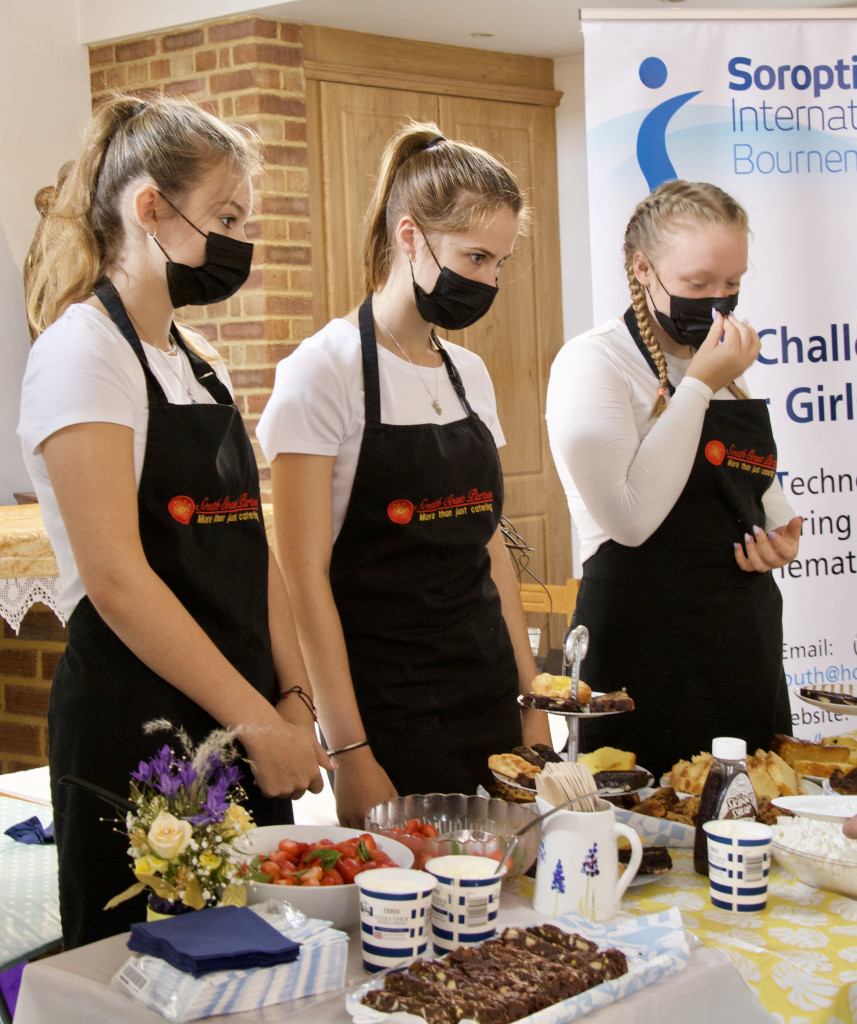 Members, families and guests celebrated the Soroptimist International Centenary at their (indoor) Summer Picnic.  Members are grateful to St Peter’s School, Southbourne for enabling the special event to be held in the beautiful chapel.

The picnic was the members choice of style of celebration not only to invite some special guests but it was also the first face to face meeting since the start of the first pandemic lockdown in March 2020!

Special guests included Her Majesty’s Lord Lieutenant of Dorset, Mr Angus Campbell, who is a great supporter of the Club and especially the STEAM Challenge and the Mayor of Bournemouth, Cllr. David Kelsey with Mr Rumble.  Retired dance teacher, Eileen Rawlings, enlightened the audience about all things ‘am-dram’.

Mayor, Cllr Kelsey, commented that he is learning more about Soroptimist International each time he visits the club events and which he had not heard of the organization before taking up the mayoral role.

Lord Lieutenant of Dorset, Mr Angus Campbell, praised the work of the global organization and referred to the coincidence that soroptimists are currently working with the Woodland Trust by planting trees, an act which compares well with the first soroptimists objective to save the redwood sequoia trees in California a century ago.  He reminded us that there are sequoia trees nearby at Longleat Forest, Wiltshire.  He also praised the ongoing work of the club’s STEAM Challenge and how it encourages girls to achieve their dreams and that it is important for both girls and boys to realize they can do anything.

Eileen Rawlings gave an informative, and at times hilarious, account of her experiences in the world of amateur dramatics.  Eileen spoke about the history of the Brownsea Island Open Air Theatre based in Poole Harbour and how it evolved out of the Bournemouth Little Theatre.  Several thespians from the latter agreed that Brownsea Island was an ideal venue to perform the plays by William Shakespeare which were under represented locally at that time and that the 400 years since his birth was an appropriate year to mark the occasion.  Eileen delighted the audience with facts of how the Open Air Theatre has developed its props and wardrobe over the years and ensures its survival in spite of the pandemic. Unsurprisingly she ended her talk with a quote from Shakespeare’s play Richard  11 –

“This royal throne of kings, this sceptered isle, This earth of majesty, this seat of Mars, This other Eden, demi-paradise, This fortress built by Nature for herself Against infection and the hand of war, This happy breed of men, this little world, This precious stone set in the silver sea, Which serves it in the office of a wall Or as a moat defensive to a house, Against the envy of less happier lands,–This blessed plot, this earth, this realm, this England.”

Special thanks was given to soroptimists who organized the event – Jean, Kathy, Jane, Kiera and Julie;  the scrumptious picnic provided and served by South Coast Caterers and the very challenging quiz produced by Duncan.