SI Cannock & District went back to nature for their third wellbeing event! They visited the Stadium Allotments, Cannock where they were shown around allotments maintained by the community for the community. Gez Hill of Inspiring Healthy Lifestyles (IHL) told how groups attend the allotments each week to plant and tend fruit and vegetables.  Inspiring Healthy Lifestyles (IHL), are a charity which, on behalf of Cannock Chase Council offers a wide range of activities to the community to improve their health and wellbeing. The amount of work that had been done at the site was very impressive!

After the tour, the Soroptimists made a bug hotel for the site and planted some vegetables including onions, lettuce and radish, they were promised the pick of the crop when they were harvested!  President Jackie Prince said “It’s so good to be part of community projects such as this where the simple act of growing vegetables can make a difference to so many people’s lives” 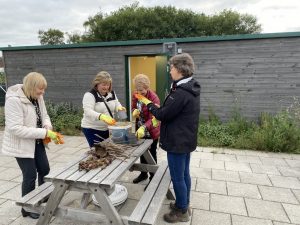 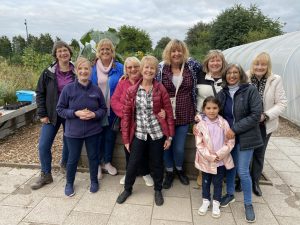