As her final task as President of SI Cannock & District, Jackie Prince was delighted to present a long service award to one of their club members.

Trish Smith became a Soroptimist 20 years ago.  For many of those years she has lived for part of the year in South Africa but that has not stopped her from being an active supporter of the club’s work to educate, enable and empower women and girls.  Because she was in this country for just over 6 months of each year, she always felt it better that she didn’t take on an officer role though she took part in and led many projects both in Cannock and in areas near to Cape Town, providing opportunities for women and girls. Three years ago, Trish took on the role of Joint President which proved very successful and, in 2020 when the first lockdown happened she agreed to continue the role – but this time leading the club herself through a very unusual year and an introduction to Zoom.

President Jackie said “, I am very happy to be able to present a certificate celebrating twenty years of membership to Trish Smith. Congratulations Trish, on behalf of SI Cannock thank you for all that you have done and still do for our club and our community”. 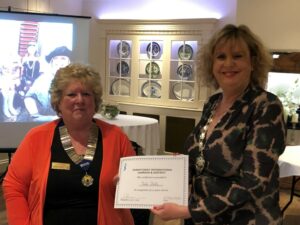