April 2022 saw the AGM of an extremely successful year for Cannock Soroptimists under the leadership of President Jackie Prince.The year began with the 2021 AGM held on Zoom; gradually things changed and club members are now enjoying meeting together again at The Barns, Huntington. In her final address to the club as President, Jackie said there had been various things she had wanted to achieve in her year, the main one being to encourage everyone in the club to contribute in some way by the end of the year. Jackie had also wanted to introduce monthly wellbeing events with the help of her nominated charity Inspiring Healthy Lifestyles.

As it was Soroptimist International’s Centenary Year there were a number of projects that the club focused on, the main ones were Planting 100 Trees, carrying out 100 Acts of Kindness and the Centenary Celebration. The ‘Tree Team’ began with trees planted at McArthurGlen Designer Outlet, continued with trees planted by members’ family and friends plus donations of trees from members of the public – and ended with Cannock Club planting 153 trees!!

President Jackie told members how thrilled she had been by the 100 Acts of Kindness project, saying that she was overwhelmed by the wonderful things members do for others and each other; she made particular mention of leaving posies on benches for women to find and take, marking World Mental Health Day.  Jackie said to club members: “I’m not sure you realise just what an effect you have on the lives of others”. It was the Centenary Celebration that perhaps had the biggest impact for the club – yes, it was an awful lot of hard work, but it involved every member of the club, all taking part in whatever way suited them; it was tremendous fun and is still being talked about by members and all who were in the audience that night.

The well-being events – walks, craft, gardening, exercise, singing – had given everyone the chance to not only try something new but also gave the opportunity to take some time out of busy lives to relax, enjoy an activity and enjoy being with friends – they proved so successful that the club intends to continue this type of activity in the future.

There were many other projects throughout the year – collecting for Books4Home, taking part in St Giles Solstice walk, donating laptops to schools as well as support for Staffordshire Women’s Aid and the Pathway Project – and three new members were inducted into the club, they are already fully involved in the work of Soroptimists.

All reports given demonstrated what a wonderful year the club has enjoyed, with many opportunities for them to improve the lives of women and children, enabling, educating and empowering them.  Everyone thanked Jackie for leading them over this centenary year and she was presented with flowers as a mark of the club’s thanks. It can definitely be said that President Jackie Prince achieved her aims and the club and its members are in a very good place!! 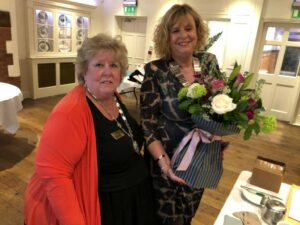 Photos attached: 1.Trish Smith presenting flowers to Jackie Prince as she leaves the office of  President of SI Cannock & District