So how did Julia come to know a Hungarian Freedom fighter?

Romance in the air…In 1957 Gyorgy Nadasdy immigrated to Britain. Eventually, he met a work colleague of Julia’s – Sylvia, whom he married in 1967. It was Gyorgy and Sylvia who would go on to introduce Julia to John – a friend and work colleague of Gyorgy. Not long after, Gyorgy would become Best Man at Julia and John’s wedding in 1968. They remained very good friends over the years.

Gyorgy would visit Julia and her husband John on occasional Sundays – his day off from work – when he would recount stories from his life; Julia loves history and listening to Gyorgy she realised she knew little about this short, tragic period in 1956 Budapest, when a peaceful protest calling for the end to the Russian Occupation was fired upon by Russian Forces. Hearing the details of his life in this part of history Julia offered to write down Gyorgy’s story. 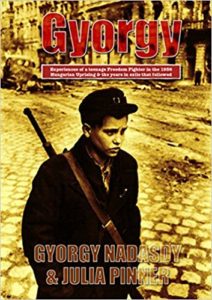 Gyorgy would return home annually to Budapest in Hungary, and return with more memories shared with his sister and brothers, which would spark off another chapter of the book. Hours were spent pulling together photographs to recounted memories, putting them into chronological order to tell the emotional story of a young child growing up in tough conditions in Hungary during and after the Second World War, to the horrendous events of the Hungarian Uprising in 1956 in which Gyorgy became a 14 year old freedom fighter.

In common with thousands of other freedom fighters, Gyorgy was forced to flee his native country to escape the revenge of the Communist regime after the failure of the uprising. Refugees could not have known the extent of the damage to their country regarding statistics of casualties and building devastation, nor the horrific aftermath of revenge taken by the Communist regime.

In December 1956 Gyorgy escaped the risk of being shot by the Russians (or worse) by crossing the border and a river to escape into Austria, leaving behind his mother, sister and brothers.

Many countries including the UK responded enthusiastically to ease the Hungarian situation, offering asylum to the Hungarian refugees. This included Tamworth in Staffordshire – which is how the teenage Gyorgy came to live in Julia’s home town to start his new life.

Julia remembers hearing the emotional tale and not being able to imagine the pain of having to abandon family and friends to take a desperate chance for freedom – leaving behind a mother and siblings who he would not see again for 25 years. Julia recounted how Gyorgy’s mother cried and cried when he was eventually able to return to see her.

It wasn’t until 1985 Gyorgy met his eldest brother Peter on ITV’s “Surprise Surprise” with Cilla Black. Peter had also had to flee from Hungary due to his involvement in the Uprising, with his journey taking him to live in Australia.

When Peter saw photographs of his brother Gyorgy in various books about the Hungarian Uprising, he would send them to Gyorgy, who consequently decided to write his own story. He showed John and Julia the relevant entries in these books and photographs of himself taken by reporters, of which one of a young freedom fighter with a rifle slung over his shoulder wandering a rubble strewn street was reproduced worldwide, and became the front cover of the book. His expression is haunting.

Seeking support from a friend to proof read the first draft, after Julia had read and re-read each paragraph to ensure she had captured the tales in chronological order. Julia sent the book off to publishers, and feels they were fortunate that the second publisher who they approached accepted the book which included over 100 photos, which the editor liked. Julia had to obtain copyright for some of these by ‘phoning Australia at 3 am!

Julia remembers how exciting it had been for Gyorgy and herself to see the book published after three years of listening and piecing together the memories to capture his remarkable story.

“I never did have any plans to write a book (and I don’t plan to do another one), but mostly what I read are true stories and biographies. Gyorgy’s experiences inspired me to write down a period of history that I knew nothing about, and it was a delight to have been given the opportunity to help him tell it”

“I would encourage anyone to feel inspired to annotate events, history, memories, or anything that you are intrigued or interested in, because moments in time will be lost if not recorded. It was a very proud moment for me to hear my daughters tell others that their “mum is an author!”