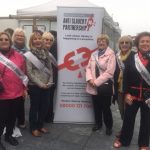 Members of SI Preston and SI Blackburn supported Pan Lancashire Anti Slavery Partnership  (PLASP)  at their first Road Show held in Blackburn 22-23 September 2018.  The event included a ‘Walk Through Experience’ where members of the public were invited to walk through a small cabin which was divided into small rooms.  Each room told of a true story of a trafficked victim.  It was a very effective and moving experience.  Club members walked round Blackburn giving out leaflets to the public in the hope of raising awareness in the locality.  It is the first of several roadshows which are planned over the next months in the large towns in Lancashire.