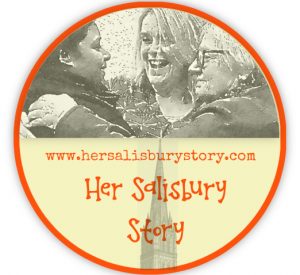 Her Salisbury Story is a project initiated by members of SI Salisbury in the months following the charter of the Club in 2019. The idea started from a conversation between members at a project planning meeting about Sandi Toksvig’s  campaign to ‘write in’ the stories of women that are largely missing from Wikipedia. As the conversation developed, members decided to seek to uncover the stories of the women of Salisbury, both past and present, who have made the city the great place it is today.

A project team began scoping out ideas for how this might be done and gained Club approval to apply for a Heritage Lottery Grant to help deliver the project. The Club was  aware that in October 2020, the city of Salisbury was to celebrate its 800 years of being a city, so it was agreed that the team could tie the project into that timescale.

When the project started members didn’t realise just how huge a project it would be or how life would change for everyone in those two years, but members are very proud of what has been achieved.

The aim of Her Salisbury Story is: 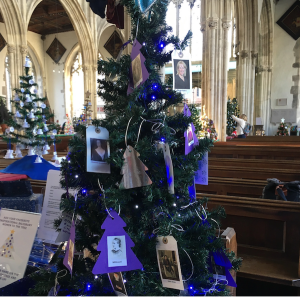 At Christmas 2019 the project began at the St Thomas’ Christmas Tree festival, with a Her Salisbury Story Christmas Tree, asking the public to suggest inspirational women HSS should find out more about. In fact many people said ‘their mum’! So the team have used other means to get nominations from local people.

HSS was successful in its bid to receive a £10,000 grant from the Heritage Lottery Fund, which enabled the team to fund the website, to train volunteers  and to run events over the past two years.

HSS formally launched the project on International Women’s Day, 8 March 2020 with an event at Salisbury’s Guildhall.

In her speech officially launching the new project ‘Her Salisbury Story’, Mayoress Carrie Walsh (right) said: ‘As Mayoress I have been privileged to meet many inspirational women working in Salisbury: community project workers, charity workers and leaders, women in business, medicine and the arts to name just a few. Their backgrounds are diverse, their contribution to our city is a legacy to be discovered, acknowledged and shared. Over the coming months you will be able to learn more about all of these women and have the chance to nominate women you know and admire for inclusion in the heritage project.’

Following her speech, The Mayoress joined her husband Mayor Councillor John Walsh to take part in the first guided walk of the day ‘Her Salisbury Footprint’. There were creative writing workshops, a creative banner making workshop for families and two pieces of musical entertainment. The Andover Museum Loft Singers brought a selection of folksongs traditionally sung by women from different parts of the UK. The Kate Edgar Singers sang a collection of songs celebrating women and their contribution to society.

Shortly after that event, the world changed and the HSS plans had to change too. The team didn’t give up…but all 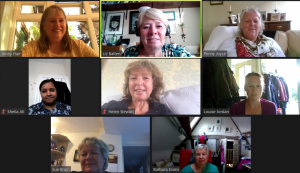 project meetings went on line on to Zoom!

Once members understood the scale of the project they had taken on a more formal project structure was developed. The project team have worked tirelessly to make this project happen by:

Historical, the members researched and wrote the profiles on the historical women. Many are on our website and there are more being developed. Their access to museums, libraries and other sources of research were severely hampered by lockdowns but they have carried on with admirable tenacity.

Contemporary, where they interviewed and wrote short profiles on contemporary women. Many are on the website and again more are in development. They had been trained to interview using hand held recorders but Covid changed that too so they are now all experts on Zoom recording and transferring audio electronically!

The team made contact with Cornelia Funke, best selling author, known as ‘Germany’s JK Rowling’ as members knew her writings had been inspired by a visit to Salisbury. She was delighted to be selected as one of the HSS ‘contemporary women’ and you can hear her story here. She asked: ‘what can I do to help this wonderful project?’ and after discussions with her, HSS members were delighted when she offered a prize of a stay at her Tuscan artists’ retreat for two local young female authors.  A writing competition  was developed and the winners (in the end Cornelia increased the offer to three places, because the quality of writing was so good) will visit Cornelia in 2022. 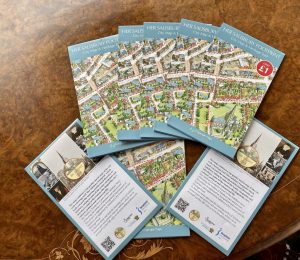 As HSS uncovered the stories of the historic women of Salisbury, some well-known, some less so, the team has been able to tie the stories of their lives into local locations. The project team developed a self-guided walking tour and heritage trail  ‘Her Salisbury Footprint’, and with funding support from Salisbury City Council and the support of advertising revenue from local businesses, a map has been  designed and printed.

take advantage of the chance to learn about the wonderful women who lived here and their cultural, political and commercial contributions to Salisbury life. The walking tour includes many city highlights while visiting locations associated with the women’s lives.

A celebration of Her Salisbury Story was held on Saturday 16 October 2021 and the Mayor of Salisbury Caroline Corbin, MP John Glen and several leading authors were among 100 guests who attended.

The HSS project team have been interviewing, researching and compiling stories of the lives of many of Salisbury’s inspirational women both past and present.  The celebration event showcased the work undertaken over the last two years  by the  team in building a digital legacy that is contributing to Salisbury’s heritage.

The event was hosted by Jenny Hair, HSS Project Chair and the programme included a presentation by Sue Brain, ‘Hidden History – Salisbury Women Rediscovered’, the launch of ‘Her Salisbury Footprint – Our Heritage Trail’ by Barbara Evans and an open discussion with two of Salisbury’s contemporary women. Tracy Daszkiewicz, Director of Public Health in Wiltshire at the time spoke about her work with the community during the aftermath of the Novichok poisonings.

Susi Mason, owner of Casa Fina, the popular, home décor shop in the High Street talked about bringing the business community together at that time and more recently during and following Covid lockdowns.

Susi is also a Director of Salisbury Business Improvement District (BID) and a spokesperson for its independent shops. 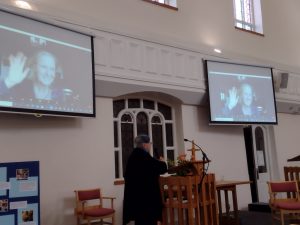 Inspiring the next generation of young women writers, Cornelia Funke  announced to the audience, via Zoom, the prize of a week at her Tuscan Writer’s Retreat, awarded to 3 winners of the writing competition – Bronwen Steele, Clementine Ebel and Allegra Marland.  The international best selling author congratulated recently graduated Bronwen from Salisbury who was delighted to receive her certificate and prize at the event from Eleanor Evans, President of SI Salisbury.  Bronwen commented, “I couldn’t be happier.  I have always loved writing, both prose and poetry.  Winning this prize is a real confidence boost and hopefully a start to a new career.”

A keynote address was delivered by Mary Ann Sieghart on the subject of her latest book,  ‘The Authority Gap’ which explores the ongoing and often unconscious relegation of women in the 21st century.  Mary Ann has had a prestigious career with 20 years at The Times as Assistant Editor and columnist.  She has presented many programmes on BBC Radio 4 and BBC2 and chaired the Social Market Foundation think tank.

Celebrations ended with afternoon tea, cake and book signing with authors Mandy Baggot, Evelyn Warton and Mary-Ann Sieghart.   Feedback from attendees was extremely positive with comments such as ‘excellent production and presentations’  ‘significant attention to female aspirations and hurdles’  ‘a first class event!!’

The project will continue to move forward over coming months and as a lasting legacy, schools resources are being developed with the hope of inspiring local young people with the stories of the women the HSS project team has uncovered and brought to light over the past two years.