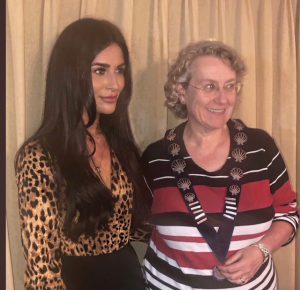 Our speaker this month was former model Carla Cressy who told us all about her terrible struggles with endometriosis which lead her to set up her own charity – ‘Women with Endometriosis’. Not only does she support women suffering from the effects of the disease she is also raising awareness of the disease which will hopefully increase early diagnosis rates.

Sir David Amess is a trustee of the charity and has helped Carla speak at Government level. She has also made contact with New York based Dr Masahide Kanayama, one of the world’s leading specialists in endometriosis and he has agreed to be linked to the charity and its important work.

Club Home
Club News
About our Club
Our President's message
Club Officers 2022-23
Programme 2022-23
Our Presidents' Projects
Our Projects
What do we do – locally?
What do we do – as a region?
What do we do – internationally?
Previous Social Events
Our club at the SIGBI Conference
Our Diamond Jubilee
International Women's Day - great celebrations
Relationships Education for all children
Our Links with Other Clubs
Members Only Page – News and Views
Contact Us