Hilary reports back from an eventful evening, (plus a brief history lesson!):

“Pussy cat, pussy cat where have you been?

I`ve been to London to visit the Queen” *

Or so runs the nursery rhyme, written in the 16th Century for Queen Elizabeth I.

Well I am not exactly a pussy cat but I did go, on behalf of Soroptimist International (SI), to London to visit the Queen. Last Monday 14th was Commonwealth Day. It is a great day of celebration for all that the Commonwealth stands for. SI has Commonwealth member countries throughout all four Federations so it is right and proper that we get involved in these events.

We have been very active through the Commonwealth Foundation over the past 12 months as an affiliated Civil Society Organisation. Many Soroptimists will have read the news stories and reports from the Commonwealth Heads of Government Meeting held in Perth in November. SI was represented by Past President Margaret Lobo and SI South West Pacific Programme Director Robyn Cain. In March last year our SIHQ staff, President Alice and I attended a parliamentary event celebrating the 2011 theme ‘Women Agents of Change‘. We have also been to several meetings and consultations held for NGOs affiliated with the Commonwealth on the future of the Commonwealth and the role of NGOs. And exactly a year ago, SI President Alice attended the 2011 Commonwealth Day reception and also had the honour of meeting the Queen! 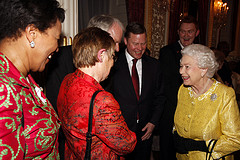 Given all the great work we have accomplished together this past year, in all Commonwealth countries, it was with great pride that I represented SI at the Commonwealth Day reception. It was held at Marlborough House in London. It is a magnificent building! Being a London Blue Badge tourist guide, I can tell you it was built originally by Sarah Churchill as her London home in the early 18th century. She and her husband, John Churchill, built Blenheim Palace near Oxford and she was for a time the great favorite of Queen Anne. She was also the ancestress of Diana, Princess of Wales. She was a feisty lady and perhaps would have made a good Soroptimist!

I was able to talk with several High 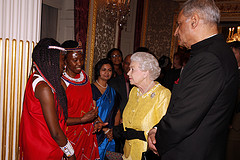 Commissioners (ambassadors) from countries where we have members including Malawi, the Solomon Islands, St Vincent and the Grenadines, India and Bangladesh. I also met the High Commissioner from Belize and when I said we did not have Soroptimist clubs in her country she said we must have Soroptimists there! So a challenge for the future!

I was able to speak to the Queen and felt very privileged to represent us and make us known as a relevant and important organisation in a world forum.

Visit the website to see all the photos from the event.

* The story of the rhyme: One of the ladies in waiting of Queen Elizabeth Ist had a cat which roamed throughout her castle at Windsor. On one occasion the cat ran under the throne and startled the Queen. Luckily she found it funny and decreed that the cat could wander about the throne room, as long as s/he kept it free of mice!

This item courtesy of the Soroptimist International blog: www.soroptimistinternational.org/blog