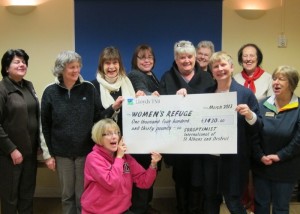 The St Albans & District Soroptimists raised an amazing £1430 for the St Albans and Hertsmere Women’s Refuge in the club year 2012/13 – even though the Club supported 2 charities this year!  Sara and Liz, Managers at the Refuge, couldn’t believe their eyes when the cheque was presented to them by the Club (see picture).

Sara and Liz gave an update on the Refuge – advising that the demand for services from the Refuge are at an all time high at a time when their funding has been cut.The women they care for are fragile and vulnerable – often with complex needs including mental health issues and drug and alcohol problems. They have 22 residential rooms for women and their children and their outreach work reaches 120/130 women a month. The Refuge has used some of the money raised by Soroptimists to help fund educational programmes for victims of domestic abuse. This is the fourth year that the club has supported the Women’s Refuge as the club’s annual charity and the club has decided to support the Refuge again in 2013/14. Soroptimist Club President Helen said “funding is being cut from vital community services like the Women’s Refuge, so it is vital that we support them, particularly in this tough financial climate”. As well as fundraising, the club has provided tea, coffee and sugar for the Refuge, household items to help women leaving the Refuge get started in a new home and Christmas gifts. Staff and supporters of the Refuge also joined in with some of the fundraising activities including a book stall on St Albans market, carol singing at St Albans station and coffee and cake sales at the Wesley coffee shop in Harpenden. One Club Member, Judy Faraday, is an Archivist for John Lewis: if Judy is offered donations for her talks to community groups on the history of John Lewis then it goes to the Refuge.

Pictured here are some of the members of the Club – in the centre with the cheque are Soroptimist President Helen Byrne with Liz Perry and Sara Jackson Managers of the St Albans and Hertsmere Women’s Refuge.