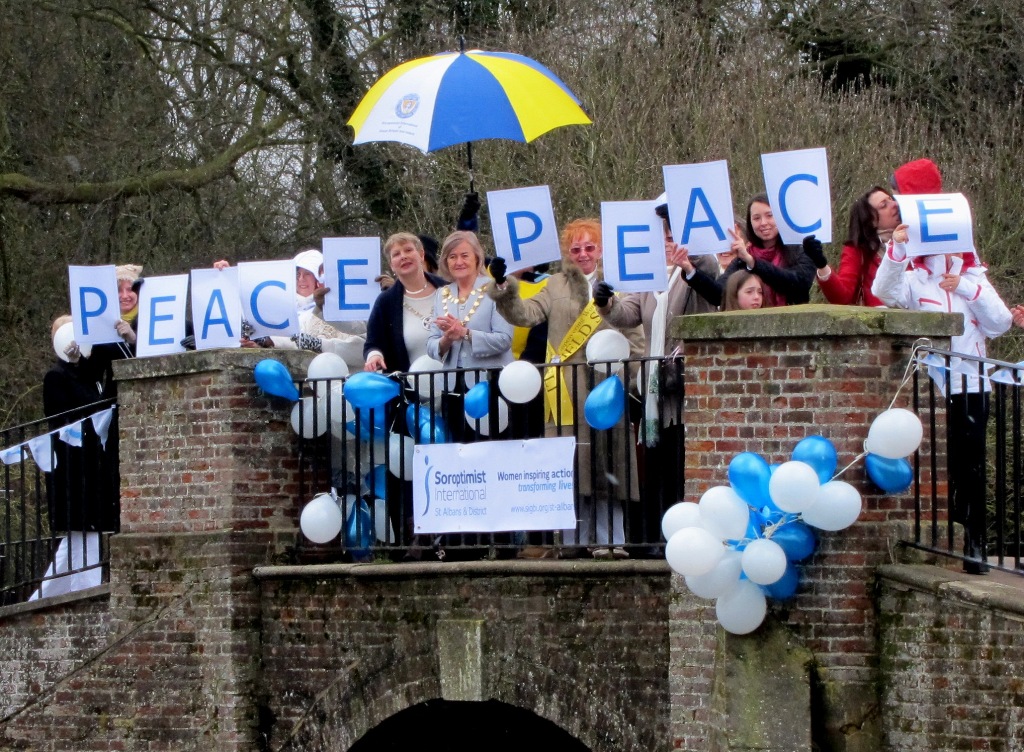 “Peace” on a bridge in St Albans: Soroptimist International St Albans & District, held an inspirational “Join Women on the Bridge” event to mark International Women’s Day on Mother’s Day. The crowds gathered bridge over the boating lake Verulamium Park in spite of the cold, wearing white, making a “Stand for Peace and to End Violence Against Women and Girls”.

The event has been reported in the St Albans & Harpenden Review: www.stalbansreview.co.uk/news/10280540.Demonstrators_gather_in_St_Albans_for_International_Women_s_Day/?ref=mmsp

Highlights of the day:

New Testament Church Choir from Fleetville sang “One Day at a time” from the bridge to set the mood.

Jane Slatter, Soroptimist International Great Britain & Ireland Director of Communications spoke about why we were having  the “Join Women on the Bridge” event in St Albans – making a stand for peace and an end to violence against women. There have been many atrocities recently against women: the shooting of Malala the outspoken 14 year old student and campaigner in Pakistan – the murder of polio vaccination workers Pakistan and Nigeria, the rape and murder of the young woman in India “Violence Against Women – Stop it Now” is a Flagship Project for Soroptimists – see www.soroptimist-ukpac.org/about/show/336/  and download the leaflet here: VAWleaflet This Club has supported the local women’s refuge for many years. As a sign of peace, people wore white. The bridge symbolises people joining together united in a common cause. Ban Ki Moon the UN Secretary General has said: “Violence against women must never be accepted, never excused, never tolerated”.

The Mayor of St Albans, Councillor Eileen Harris attended in spite of feeling unwell and gave a speech with a personal perspective in support of International Women’s Day. She said that although much progress had been made in the UK towards women’s rights and equality, there was still much to be done. She admired the work of Soroptimists and organisations like the St Albans & Hertsmere Women’s Refuge who had a special 4 legged guest on the bridge ! The mayor was presented with a white heather plant by Emily Taylor – this plant represents peace and protection from danger.

There was coffee, networking and a welcome warm up afterwards at the nearby Inn on the Park Café www.inn-on-the-park.com

Across the world thousands of Soroptimists marked the 102nd anniversary of International Women’s Day with hundreds of activities and events on and around 8 March.