[new_royalslider id=”1″] Knebworth Under 13s were crowned champions of the Soroptimist Audrey Collins Girls Hertfordshire Cricket League by narrowly beating Hemel Hempstead, in the county final on Sunday 14 July. The triumphant Knebworth Girls U13s are pictured here celebrating and being presented with the shield, trophy and a cheque by Helen Byrne, Immediate Past-President of Soroptimist International St Albans & District. Hemel Hempstead Girls were bitterly disappointed having won in 2011, and been very close runners up again in 2012. Jonathan Cirkel, the Knebworth Girls’ Coach (also pictured) said “It is great for the girls to have their own league tournament to play for thanks to Audrey Collins and the Soroptimists. I am so proud that my girls have won this year – they played brilliantly”. Helen said “We hope the league will encourage more girls to join Hertfordshire Cricket Clubs so that the league can go from strength to strengh as a lasting tribute to Audrey”.

This competition is sponsored by the St Albans Soroptimists as a lasting legacy to past member Audrey Collins who died in 2010. Audrey was an inpirational Soroptimist – a pioneer of Women’s cricket and a trail blazer for women. She received an OBE for services to women’s cricket and was one of the first 10 female members admitted by the MCC in 1999. 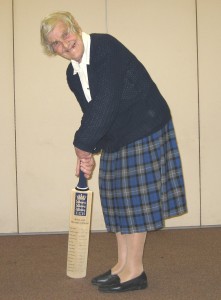