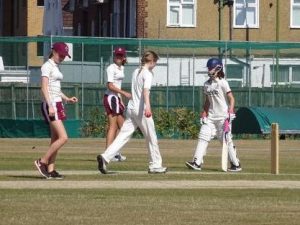 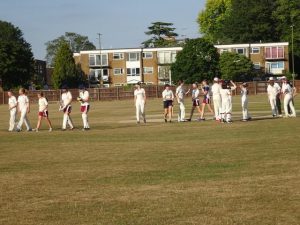 the top to compete for the SI Audrey Collins Trophy, giving an enthusiastic crowd a very entertaining display. Members of Soroptimist International St Albans and District, Helen Byrne and Barbara Saunders, were delighted to attend and represent the Club. 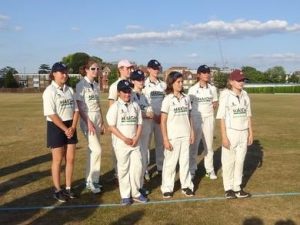 Bishop’s Stortford who are to be commended for reaching both the U14 and U12 finals in their first year of entry, batted first and, despite some very good, consistent bowling and great work in the field from Harpenden reached a respectable 278 after their 20 overs. Some good initial bowling from Bishop’s Stortford, backed up by good work in the field , initially pegged Harpenden’s scoring rate down – they scored 228 after 10 overs having lost no wickets, so there was 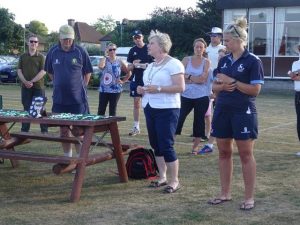 everything to play for.

However Harpenden’s superiority, despite only being able to field 8 players, began to show over time, they batted very well, lost fewer wickets and began to score more freely as the opposition tired : finishing up as winners with a total of well over 300. 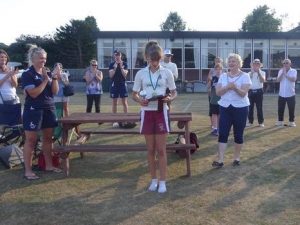 Harpenden were assured and consistent and deserving of their win whilst Bishop’s Storford gave of their best, making it a great match to watch. Bishop’s Stortford kept the pressure on to the end despite the heat, displaying some good skills and showing that they will be a force to be reckoned with in future seasons.

The competition is supported by Soroptimist 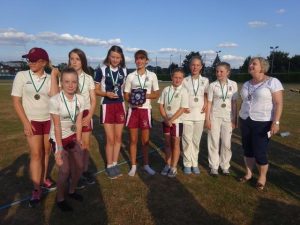 International of St Albans & District in memory of member Audrey Collins who was a great cricketer, reaching the pinnacle of her sport – playing for England – and receiving an OBE for her contribution to the development of Womens cricket in England. To read more about this Soroptimist project please click on the link here www.sigbi.org/st-albans/charities/cricket

This U14s match was the second of two girls junior leagues cricket finals held on 8th, with the U12 girls from St Albans and Bishop’s Stortford battling it out in the morning with St Albans triumphing.

Thanks are due to the many volunteers involved in supporting the girls, the teams and the competition, including the West Herts ground staff who have had a difficult time in the recent heat wave and the two umpires who oversaw both matches. Without their involvement none of this would be possible.