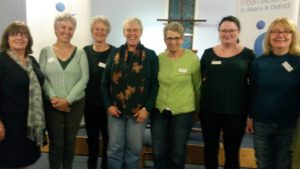 We had an excellent talk from Pam and Kathy from Herts Rape Crisis and Sexual Abuse Centre www.hertsrapecrisis.org.uk   The talk is summarised below. Our Members and guests had many questions for them and the answers are included in the text below.

After Pam and Kathy, Ruth Farenga from Mindful Pathway www.mindfulpathway.co.uk demonstrated Mindfulness in Practice – more about this below Pam and Kathy’s talk.

Herts Rape Crisis and Sexual Abuse Centre – Pam talked to us about the early days of the centre which had been set up in a small room in Ware In 1986. Originally it was a telephone service only but counsellors would go out to the homes of victims in pairs. This still continues and nowadays the centre has twelve trained women counsellors, all volunteers, one part time admin assistant and one part time office manager. The centre now is based centrally in Hatfield and has a counselling and meeting room. It cannot help men or young people under 18 – they are referred to the appropriate agencies. As a counselling service, Herts Rape Crisis and Sexual Abuse Centre will listen and believe victims who can call and speak to a counsellor on Thursday 7.30 – 9.30pm; leave a message anytime and will be telephoned back or meet a counsellor on a one to one basis at the office. (Counsellors will still go out in pairs to victims’ homes or a mutually convenient location if required). Counsellors need to take a call from the victim rather than family members or friends because it is a big step for many to make this first move and the start of being in control, although generally counsellors  are happy to talk to friends and families after this has happened. The centre works in partnership with Sexual Assault Referral Centre.

Kathy then spoke about the finances of Herts Rape Crisis and Sexual Abuse Centre. They have just received a grant from the Ministry of Justice which will provide the money to pay the two part time members of staff for the next two years. Other funds come from small grants from the Co-Op, Tesco, organisations like ours and individual donations. Rent and telephones have to be paid for. In addition they have put on Gala Nights, Quiz nights etc.

For the year ending March 2019, Herts. Rape Crisis and Sexual Abuse Centre had 289 calls on the help line. The service is available 24/7 365 days per year. They have had 166 face to face meetings, 45 telephone counselling sessions and 300 enquiries on Email. There used to be three centres covering Hertfordshire but Stevenage has closed and Watford can provide telephone support only. The spotlight has been on this area recently (#MeToo campaign, Rape and Abuse in soaps), so the level of calls is increasing and currently there are 74 on the waiting list and it is impossible to say how long people will have to wait. They have helped all ages, ethnic groups and socio economic groups from the age of 19 – 70+. There is no typical profile and abusers are found in all areas of society. Where there is a court case pending, the centre cannot give support as all too often women will stand accused of having words put into their mouths. The number of rape cases going to court is falling as without independent evidence it is often impossible to get a prosecution. For this reason many cases do not get through the Crown Prosecution Service and make it to court. The actual process of going to a Police Station and reporting a rape and the examination which may not always be with a female doctor can prove too much for some women. Young women are advised to take care in night clubs; pubs etc and make sure they do not leave on their own as a potential perpetrator might follow them. Many of the victims were abused in the 1940s and 1950s when such things were often covered up and they have kept quiet until the present day. The result of this is that a part of the women’s emotions is still at the age they were when the abuse took place. These women can be most successfully helped because they are absolutely committed to freeing themselves of this burden. They recruit and train new counsellors every two years. Each trainee costs the centre £1000 and has ten weeks intensive training. It is free for the trainee counsellors but many drop out at this stage. The work is hard and a heavy commitment is required. There is a hard core of staff who have been there many years.

(There are no photos because Pam and Kathy advised us that photographs of counsellors is not permitted). 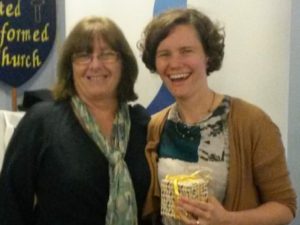 Mindfulness in Practice with Ruth Farenga from Mindful Pathway www.mindfulpathway.co.uk Ruth (pictured here R with Amanda Brown L) told us about how she had reached a point in her life where she had become so stressed in the corporate world that she had to ‘fix herself because she was broken’. After many unsuccessful forays into self-help, nine years ago Ruth attended a course on Mindfulness at Oxford University. This suited her need for robust science based evidential learning. She soon realised that this was a way in which she could help herself and help others through teaching so she set up her company eventually taking on board a number of freelance tutors. There are a several myths concerning mindfulness:

We then spent ten minutes doing a mini meditation which one Member said she “found peaceful” and others said they felt connected to the natural world.

Ruth runs a number of well being courses – we will share dates of the next ones.