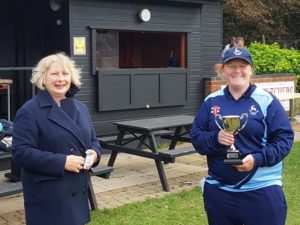 The presentations were made at the end of the day: 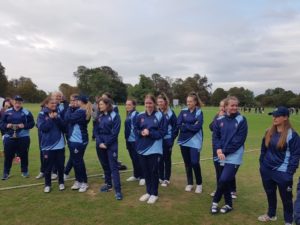 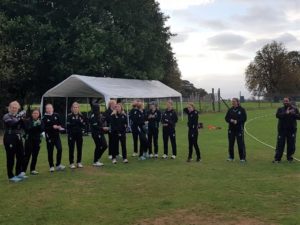 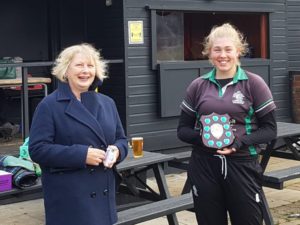 “Overall, especially in these times, I don’t think the league could have gone any better (especially for Herts of course) with 4 of the 6 games played between the 4 counties very, very close.

In August the Hertfordshire Ladies team kicked off the Soroptimist East of England County Championship with a 9 wicket win over Huntingdonshire. The following weekend their next game was very tense as Buckinghamshire made a reasonable score of 177 and with Hertfordshire at 79/5, it looked a lost cause,  but the girls managed to sneak home by 1 wicket with the last pair managing to get the 7 runs needed to win with an over left.

The team played Norfolk the next day which was a title decider.  I didn’t think it would be much closer but it was. Herts only made 74 which was in truth a poor batting display for the talent that is in the team. And with Norfolk 31 for 0 the game looked over. But the team came back and Norfolk lost 7 wickets for 12 runs .  Norfolk tied the game with 1 wicket left and needed one run but Herts took the wicket so the match was tied. The game went into a Super over which Herts won by 6 runs to 5.

When we started the league we could only have dreamed of a final game like this and it was a fantastic advert for Womens cricket. Even the locals at Harlow were surprised and entertained. They left the mens game they were watching and came over to watch the womens game and want the team to play there more. (They did play another friendly there the following weekend).”

Sadly there was no Soroptimist Audrey Collins U14 Girls Trophy this year as there were no Junior competitions at all in Hertfordshire only friendlies. However considering at one point in the season it looked like there wasn’t going to be any womens and girls cricket at all because of the pandemic it has been a pretty good season. Thanks to everyone who made it possible.