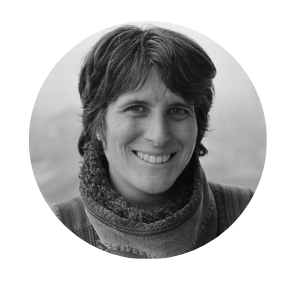 On Monday 22 Nov the Soroptimist International St Albans and District Club Members and guests, Soroptimists and friends from as far afield as Manchester, Wales and Western Canada! were delighted to welcome Elizabeth Gowing from The Ideas Partnership to talk about her inspiring work in Kosovo supporting girls into education and empowering women in the Roma, Ashkali and Egyptian community in Pristina.

Elizabeth explained that she was going to share the stories of 7 women living in Kosovo. 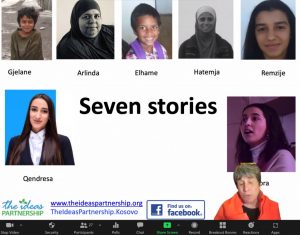 She shared her journey to Kosovo and the history of the breakup of Yugoslavia.

Albania is the neighbouring country 90% of people living in Kosovo are Albanian, 8% from Kosovo and the remaining 2% include the minority Roma Ashkali and Egyptian people and all 7 of the women talked about are from this most impoverished and ostracised community. 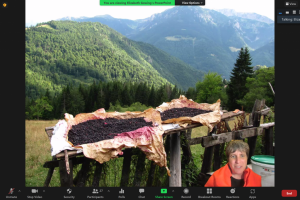 Elizabeth is an educationalist and talented story teller. She wrote her first book in Kosovo “Travels in Blood and Honey: Becoming a Beekeeper in Kosovo”. Before she moved to Kosovo, the name for her conjured up blood, ethnic cleansing and war. Her book reveals another side to the newest country in the world—a land of generous families, strong tastes and lush landscapes: a land of honey. Over half of 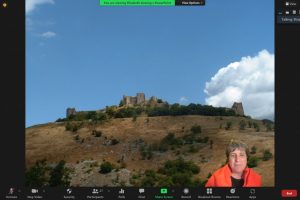 the homes were destroyed in the war so the country has a lot of new buildings. To set the scene Elizabeth shared some personal photos showing some of the beautiful scenery, Ottoman architecture, hand crafts and foods. Kosovo’s most famous person is Mother Theresa, although she was Albanian and born in Bosnia, she first received her calling while living in what became Kosovo.

There is no formal refuse management in Kosovo, most recycling is done through children from the minority Roma, Ashkali and Egyptian community collecting plastics and other recyclable items from the dump to sell on. Most children from these minorities are not participating in any form of education.  The housing is very low quality, cramped, cold and uninsulated with very poor water supply. Collecting recyclables is very poorly paid, a day spent helping a family collecting plastic raised just 2 Euros.

Hatemja’s family of 5 children plus the parents live in one room with a stove. One son had recently been injured after a pan of boiling water fell over him. Hatemja was unable to read so was unable to read the discharge letter after he had been seen at the Emergency Room. She asked Elizabeth for help and she bought cream to treat the boy’s burns and gradually built up trust and got to know more about Hatemja and her family. One of the barriers preventing her children accessing education was that the children didn’t have shoes. This led to a campaign collecting shoes.

Gjelane was the nine year old daughter of Hatemja. Shoes were not the only barrier preventing her from accessing education. At 9 she was considered too old to access school, because they needed to pass a test at 9 and without education this wasn’t possible. Schools didn’t want to accept children from the minority groups and thought that once children got over a certain age without any education they were considered too difficult to teach. The kids were not wanted by the schools and if they went, they were humiliated because of their poverty. Gjelane introduced Elizabeth to 20 more children in the same position. She offered to tutor them. On the first day 23 children attended, by the end, over 50 were attending. The mornings were spent teaching and the afternoons were spent lobbying officials to change this practice. The schools finally changed their policy and 63 children ended up returning to education.

One of the fathers of the children became the a voice for the children and acted as a intermediary between the officials and volunteers. Elizabeth realised they needed to replace the income lost to the families by the kids going to school so she started up a social enterprise with 5 of the mothers – to start with they made and sold soap. In addition they now make and sell bags for the soap, tote bags, lavender bags and celebration cards. Sales support the education of the children.

Elhame is the youngest of Hatemja’s children. Her parents wanted her to access preschool education. The earliest children normally start school is 6. Through some research Elizabeth found that over 200 parents wanted their children to attend preschool.  Through online fundraising they were able to create a kindergarten for up to 60 children.  Over 400 children have now been through the preschool.

Also started offering extracurricular activities and additional tutoring. They was also assistance given to children with other needs that prevented them accessing education

Elizabeth explained the statistics for child mortality for children born into these minority communities 47 children of 1000 will not make it to their fourth birthday. In UK and North America it is 3 children. In Kosovo, as a whole, it is 12.

They then began offering help to new parents with a midwife, antenatal classes, and increased access to contraception and family planning education.

Also, bursaries were set up to allow children to go on to further education. University is 50 Euros a month, which although cheap is not possible for rubbish pickers. As part of the bursary there was an expectation that they would take part in some volunteering work back within their community.

One of the women trained up by one of the initial women working with the soap making and sewing project. Four women then trained nine more women to use sewing machines. They have been making facemasks.

Girls were getting married early (e.g. 13-year-old girl married to 15-year-old boy) and dropping out of education. Little Social Workers were trained to work in their community tackling early marriage.

Remzije has won a Humanitarian Activist Award for her work of challenging child marriage in her community.

Vlora is now in her final year at University training to be a teacher. She was one of the children who joined this project which started 6 years ago. She was also a bursary recipient.

Qendresa is now the first women elected in the role equivalent to a County Councillor in the UK.

All the stories are connected and Elizabeth gave thanks to Hatemje who started her story and changed her life by asking for her help in the beginning. Each step took her work a bit further on this extraordinary journey.

Orange the World – A video-documentation of the intensive work of youth volunteers from The Ideas Partnership supporting artists from Center for Art Development – Q’art in the ideation process of revitalizing the Freedom Square in Fushe Kosova/Kosovo Polje through art.

Gender Based Violence in the Roma, Ashkali and Egyptian Community –

They did some research and found that 72% women felt it was okay for their husband to beat their wife if the dinner was burnt. If the girls made it to high school the number comes down to around 30%. This is still too high but powerful role of education in improving rights of women and girls.  Average life expectancy within community is only 56… 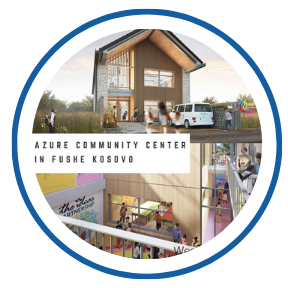 This is why The Ideas Partnership is prioritising education as a base for change for women.

They are raising money for their most ambitious project yet, building a modern new community centre for the women and children they have been supporting in Fushe, Kosovo (see artist’s impression).

The ethos is this:

Help people in need to help themselves

Help people in need to help others in need…

“When you learn teach, when you get give” – Maya Angelou

They already had an opening ceremony for the new centre with important high level support for these minority groups – including from the Prime Minister of Kosovo abd the British Ambassador. They even had a visit by the Duchess of Cornwall.

Q&A – there were some great questions (as always!).

Funding? No money from central government in the 7 years – supportive and like what they do but still battling to get these minorites accepted by local councils.

Growth? Now in 4 communities – if spread too thin they woudn’t have the trust they do now.

Standard of homes improving? They are not a housing charity but Hatemja has now been rehomed through a privately funded project.

Difficulties in girls getting an education? Because the average age is 56 there is a lot of pressure to marry young and start families young.

COVID Problems? Food distribution was a massive problem, but cases are low now.

This event was organised by the Club’s Peace Team.

Feedback in the Zoom chat included “Brilliant evening – Elizabeth is an inspiration and a great story teller!” “Thank you very much. I enjoyed hearing Elizabeth and her amazing work in helping so many people.” ” Thank you for an interesting evening, a definite eye opener.” 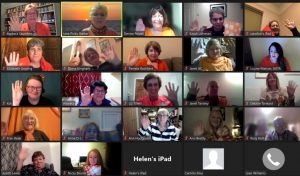 At the end of the meeting  we took this screen shot to launch the #16daysofActivismtoEndGenderBasedViolence #OrangeTheWorld – click here to find out more www.sigbi.org/st-albans/orange21

There was no charge for the event, but attendees were asked if they would like to make an optional donation to the The Ideas Partnership.

You can also donate via the Soroptimist International St Albans & District website by clicking here www.sigbi.org/st-albans/donate